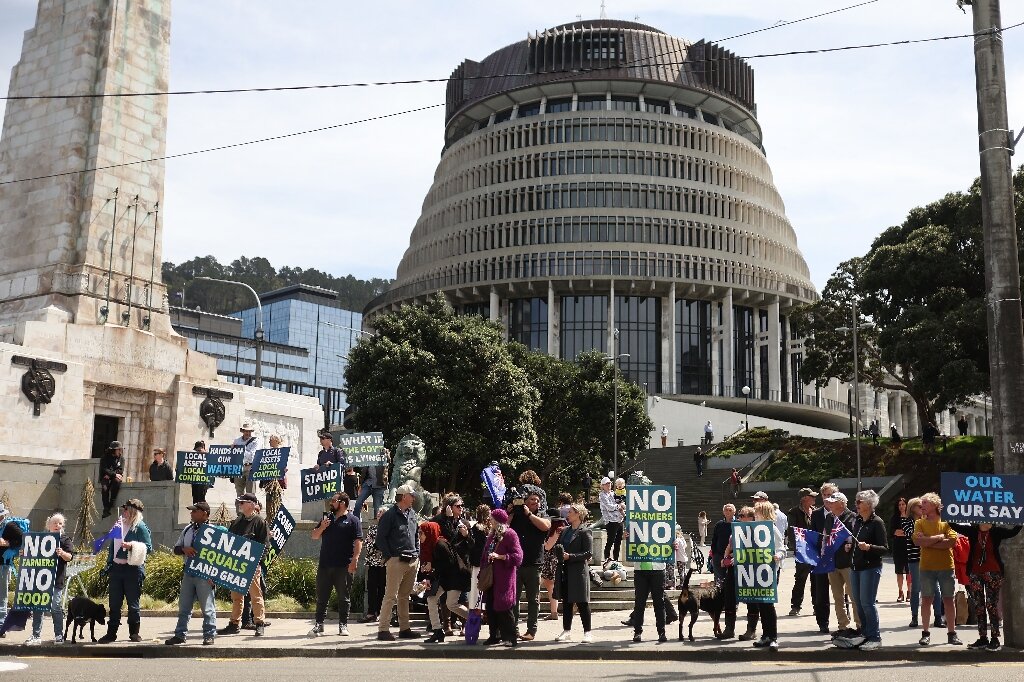 Farmers quit their fields and hit the streets of New Zealand’s cities Thursday in countrywide protests against plans to tax greenhouse emissions from farm animals.

Convoys of tractors, 4x4s and farmyard vehicles disrupted traffic in Wellington, Auckland and other major hubs, as protestors demanded the centre-left government ditch plans for an animal “burp and fart” tax.

Earlier this month, Prime Minister Jacinda Ardern touted a “world first” levy on emissions of methane and nitrous oxide produced by the nation’s six million cows and 26 million sheep as a step to tackling climate change.

Thousands of farmers gathered Thursday brandishing signs saying the policy “stinks” and warning that the tax would make food more costly, while putting their livelihoods at risk.

“Most farmers have had enough,” said one Wellington protestor who gave his name only as Chris. “It’s getting hard to carry on farming and this government isn’t really supporting us—it’s a tough gig at the moment.”

Animals produce methane and nitrous oxide as a byproduct of munching on grass and feed.

Methane is much less abundant than carbon dioxide and does not linger as long in the atmosphere, but is a much more potent warming agent.

Scientists believe methane is responsible for roughly 30 percent of the global rise in temperatures despite being a fraction of the greenhouse gas mix.

Ardern has argued the tax is needed to reach climate targets and could even benefit farmers if they can charge more for climate-friendly meat.

She also signalled a possible willingness to compromise.

“We are out talking to our farmers and food producers as to the best possible design,” she told reporters in Auckland.

Bryan McKenzie of protest organisers Groundswell NZ said the tax was “punitive” and “an existential threat to rural communities”.

“After years of faux consultation, the government has given up on all pretence of a fair and workable agricultural emissions policy.”

While the government hopes the tax will reduce livestock emissions by 20 percent, McKenzie argues that any “reductions will be replaced by less efficient foreign farmers”.

Urban supporters also joined the protest in some regions, with one sign in the southern city of Dunedin reading “Farming tax affects us all”.

In a joint statement, several mayors from New Zealand’s remote west coast regions said they “stand strongly in support” of the protest.

Environmentalists argue that protesting farmers are stuck in the mud.

“This country’s rural and agricultural sector has been hard hit by floods, intense storms and droughts this year alone,” said Emily Bailey of Climate Justice Taranaki.

“That cost millions in damages and loads of stress and heartbreak for those losing homes, sheds, stock and fences… It’s only getting worse,” she said.

“Farmers can either adapt and rapidly bring down their emissions or they, and everyone else, will suffer more.”

Redmi Note 12 Series Confirmed to Launch in October: All Details