New theories and materials aid the transition to clean energy 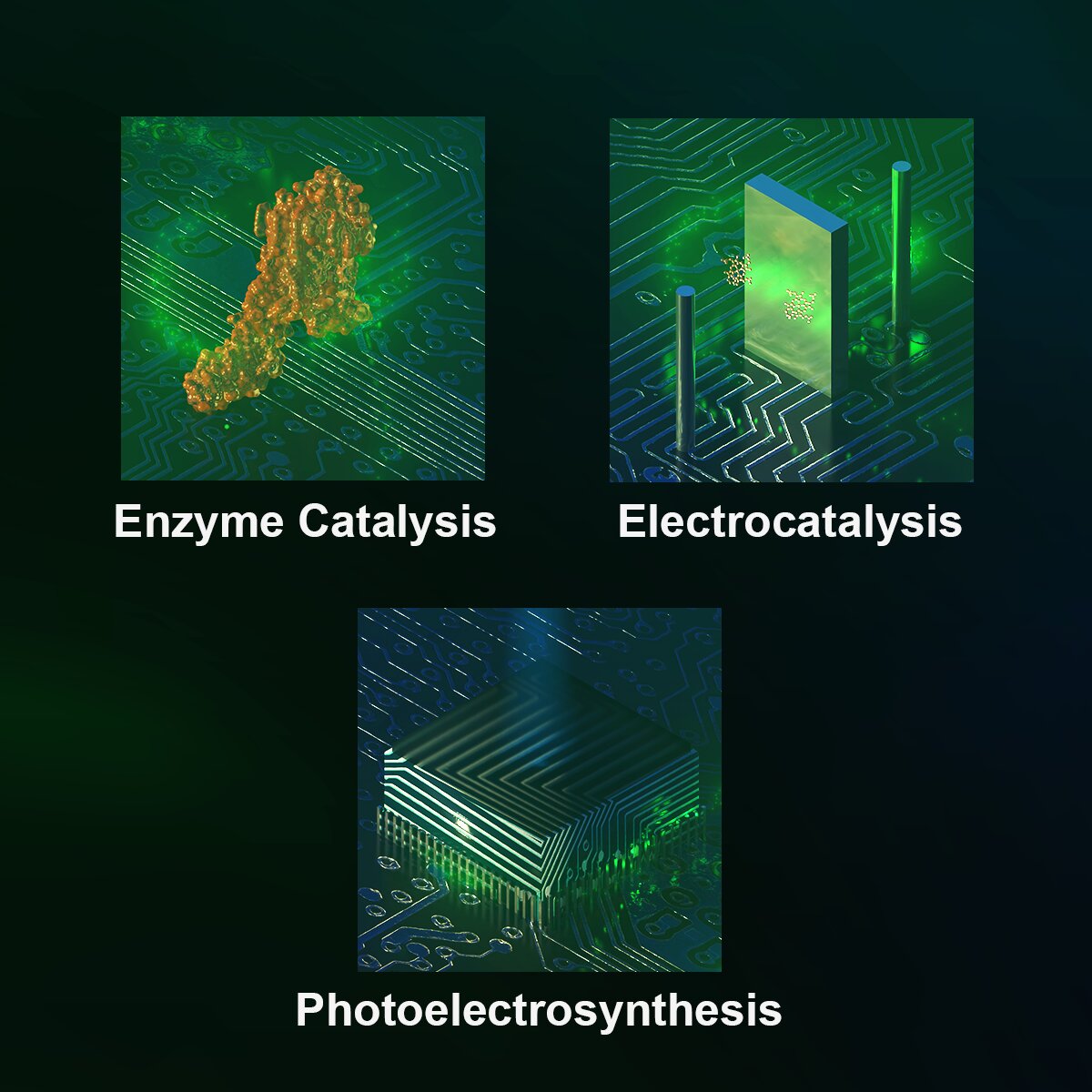 With each passing day, the dark side of our addiction to fossil fuels becomes more apparent. In addition to slashing emissions of carbon dioxide, society must find sustainable alternatives to power the modern world.

In a new study, Gary Moore and his research group explore different approaches to catalysis, a chemical process that plays an essential role in biological reactions, as well as many industrial applications.

Catalysts are substances that speed up the rates of chemical reactions, without being consumed during the reaction process. Enzyme catalysts are so important in nature that life would be impossible without them, as conditions within living cells are not conducive to many vital chemical processes. Chemical reactions that would otherwise require hours or even days to occur can unfold in under a second with the help of enzyme catalysts.

Chemical catalysts have been used in a variety of human applications, ranging from pharmaceutical development to biodegradable plastics and environmentally safe fertilizers. They may also advance the development of green energy solutions to address the climate crisis, an area Moore’s group has actively pursued.

Moore is a researcher in the Biodesign Center for Applied Structural Discovery (CASD) and an associate professor in ASU’s School of Molecular Sciences (SMS). He is joined by Daiki Nishiori, a graduate student in SMS and lead author of the new study, as well as Brian Wadsworth, a former graduate student in SMS who is now employed at Intel Corporation.

The study findings appear in the current issue of the journal Chem Catalysis.

The new study draws on investigations into the behavior of catalysts by Moore and his ASU colleagues as well as other researchers in the field. The current perspective article describes three forms of catalysis—enzymatic, electrocatalytic and photoelectrosynthetic—outlining progress to date and highlighting some of the remaining challenges faced by scientists seeking a comprehensive understanding of these important phenomena.

While a great deal has been learned through the study of enzyme catalysis in living organisms, researchers hope to develop synthetic alternatives that can improve on nature’s designs. “It’s challenging to mimic biological enzymes for catalysis,” Nishiori says. “Biological enzymes have complex, three-dimensional protein structures,” and operate under quite different conditions than most human-engineered catalysts.

Instead, researchers hope to produce a new range of synthetic catalysts to drive chemical reactions with high efficiency. Successful results could greatly improve the industrial production of many products of benefit to society. These include new types of carbon-neutral or carbon-free fuels.

“We cover a fair amount of material space in this article, including traditional chemical catalysis by enzymes, as well as electrocatalytic processes mediated by biological and/or synthetic complexes,” Moore says. The study then moves on to describe hybrid systems that capture radiant light energy and use it to drive charge transfer reactions. The obvious parallel in nature is with photosynthetic processes carried out by plants.

But artificial photosynthetic technologies can’t simply replicate nature’s blueprint. In addition to a limited understanding of the structure-function relationships governing their performance, photosynthetic plants convert and store barely 1% of the incident sunlight gathered by their leaves in the form of chemical bonds. These bonds ultimately make up the foods we eat, and on longer-geological time scales, the carbon-based fossil fuels our modern societies rely on. This is all a healthy plant needs to develop and reproduce but is insufficient for human applications.

Designing new photoelectrosynthetic devices involves using light-gathering technology, similar to current photovoltaic cells, and coupling it to a thin layer of catalytic material. In this scheme, charge carriers are transferred from a semiconductor surface to catalytic sites. Once a catalyst has accumulated enough charge carriers, it enters a so-called activated state, allowing catalysis to proceed. The process can be used to produce hydrogen from water or to produce reduced forms of CO2including methane, carbon monoxide, liquid fuels, and other industrially useful products.

“Here, the fuels we are describing are not tied to fossil carbon sources. We can develop chemistry that’s either carbon free, including the transformation of water into hydrogen gas, which could serve as a fuel, or we can use CO2 from the atmosphere to generate carbon-containing fuels,” Moore says. “In this latter example, although the resulting fuels are carbon-based, no new sources of CO2 are liberated into the atmosphere.” The process is a form of carbon recycling.

Moore refers to such technologies as photoelectrosynthetic. While they hold significant promise for producing clean energy and cleaner generation of useful industrial products, understanding the chemistry at both a theoretical and practical level is challenging. The photons of light and charge carriers used to jumpstart catalysis are quantum entities, with particularly subtle properties that researchers are still struggling to accurately model.

Alongside these advances, researchers in materials science will need to design materials better able to exploit these processes, fabricated from durable and affordable materials.

New paths through the energy labyrinth

In addition to the purely scientific hurdles to be addressed, Moore states that changes in public policy will be critical drivers if greener energy technologies are to succeed. “It’s daunting to compete with an existing technology that involves simply drilling a hole in the ground to extract a source of energy that’s already there,” Moore says. A scientifically educated public, able to make informed voting choices that impact how society invests in future infrastructure will also be vital. “Do we want to choose to make investments in technologies that minimize the impact of climate change, or do we continue making use of an energy infrastructure with components and processes that are over a hundred years old?”

Moore is hopeful that advances in enzymatic, electrocatalytic and photoelectrosynthetic technologies will play important roles in a more sustainable, less destructive energy future.

Prosecutors embrace a color-blind approach to prosecution, highlights need for…

Adolescents’ experiences with police have harmful repercussions for later life…

How Darth Vader Actually Got Rid of Anakin (After…