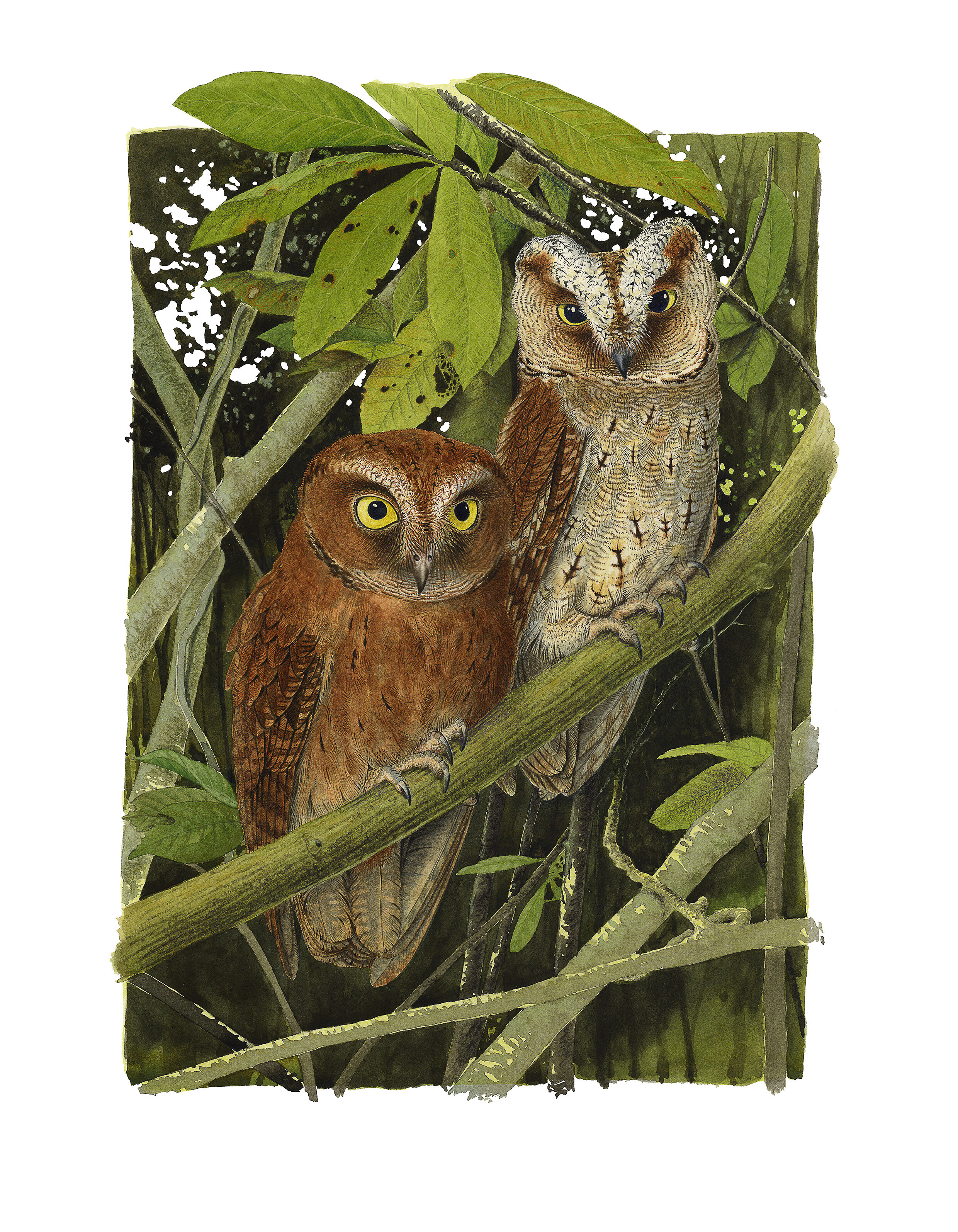 A new species of owl has just been described from Príncipe Island, part of the Democratic Republic of São Tomé and Príncipe in Central Africa. Scientists were first able to confirm its presence in 2016, although suspicions of its occurrence gained traction back in 1998, and testimonies from local people suggesting its existence could be traced back as far as 1928.

The new owl species was described in the open-access journal ZooKeys, based on multiple lines of evidence such as morphology, plumage color and pattern, vocalizations, and genetics. Data was gathered and processed by an international team led by Martim Melo (CIBIO and Natural History and Science Museum of the University of Porto), Bárbara Freitas (CIBIO and the Spanish National Museum of Natural Sciences) and Angelica Crottini (CIBIO).

The bird is now officially known as the Principe Scops-Owl, or Otus bikegila.

“Otus” is the generic name given to a group of small owls sharing a common history, commonly called scops-owls. They are found across Eurasia and Africa and include such widespread species as the Eurasian Scops-Owl (Otus scops) and the African Scops-Owl (Otus senegalensis).

The scientists behind the discovery further explain that the species epithet “bikegila” was chosen in homage of Ceciliano do Bom Jesus, nicknamed Bikegila—a former parrot harvester from Príncipe Island and now a ranger of its natural park.

“The discovery of the Principe Scops-Owl was only possible thanks to the local knowledge shared by Bikegila and by his unflinching efforts to solve this long-time mystery,” the researchers say. “As such, the name is also meant as an acknowledgment to all locally-based field assistants who are crucial in advancing the knowledge on the biodiversity of the world.”

In the wild, the easiest way to recognize one would be its unique call—in fact, it was one of the main clues leading to its discovery.

“Otus bikegila’s unique call is a short ‘tuu’ note repeated at a fast rate of about one note per second, reminiscent of insect calls. It is often emitted in duets, almost as soon as the night has fallen,” Martim Melo explains.

The entire Principe Island was extensively surveyed to determine the distribution and population size of the new species. Results, published in the journal Bird Conservation International, show that the Principe Scops-Owl is found only in the remaining old-growth native forest of Príncipe in the uninhabited southern part of the island. There, it occupies an area of about 15 km2, apparently due to a preference for lower elevations. In this small area (about four times the size of Central Park), the densities of the owl are relatively high, with the population estimated at around 1000-1500 individuals.

Nevertheless, because all individuals of the species occur in this single and very small location (of which a part will be affected in the near future by the construction of a small hydro-electric dam), researchers have proposed that the species should be classified as “Critically Endangered,” the highest threat level on the IUCN Red List. This recommendation must still be evaluated by the International Union for Conservation of Nature.

Monitoring the population will be essential to get more precise estimates of its size and follow its trends. For this purpose, a survey protocol relying on the deployment of automatic recording units and AI to retrieve the data from these has been designed and successfully tested.

“The discovery of a new species that is immediately evaluated as highly threatened illustrates well the current biodiversity predicament,” the researchers say. “On a positive note, the area of occurrence of the Principe Scops-Owl is fully included within the Príncipe Obô Natural Park, which will hopefully help secure its protection.”

This is the eighth known species of bird endemic to Príncipe, further highlighting the unusually high level of bird endemism for this island of only 139 km2.

“Although it may seem odd for a bird species to remain undiscovered for science for so long on such a small island, this is by no means an isolated case when it comes to owls,” the researchers state. “For example, the Anjouan Scops-Owl was rediscovered in 1992, 106 years after its last observation, on Anjouan Island (also known as Ndzuani) in the Comoro Archipelago, and the Flores Scops-Owl was rediscovered in 1994, 98 years after the previous report.”

“The discovery of a new bird species is always an occasion to celebrate and an opportunity to reach out to the general public on the subject of biodiversity,” says Martim Melo. “In this age of human-driven extinction, a major global effort should be undertaken to document what may soon not be anymore,” he and his team state in their paper.

“Birds are likely the best studied animal group. As such, the discovery of a new bird species in the 21st century underscores both the actuality of field-based explorations aiming at describing biodiversity, and how such curiosity-driven endeavor is more likely to succeed when coupled with local ecological knowledge, the participation of keen amateur naturalists, and persistence,” they add.

They believe that this “new wave of exploration, carried out by professionals and amateurs alike,” will help rekindle the link to the natural world, which will be essential to help revert the global biodiversity crisis.

Twitter Plans to Lay Off a Quarter of Its Workforce in First Round: Report

How to install Android 14 on your phone right now

Harrison Ford Addresses The Backlash To…