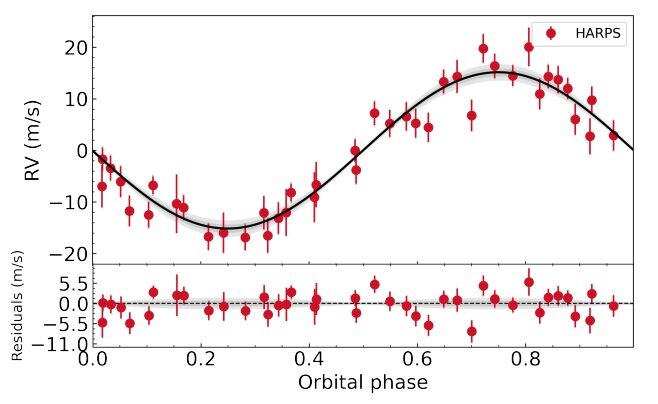 Using NASA’s Transiting Exoplanet Survey Satellite (TESS), an international team of astronomers has detected a new alien world. The newfound exoplanet, designated TOI-2196 b, turns out to be a type of a rare “hot sub-Neptune.” The discovery was detailed in a paper published August 11 on arXiv.org.

TESS is conducting a survey of about 200,000 of the brightest stars near the sun with the aim of searching for transiting exoplanets. It has identified over 5,800 candidate exoplanets (TESS Objects of Interest, or TOI), of which 233 have been confirmed so far.

Now, a group of astronomers led by Carina M. Persson of the Chalmers University of Technology in Sweden, has recently confirmed another TOI monitored by TESS. They report that a transit signal has been identified in the light curve of a G-type star known as TOI-2196. The planetary nature of this signal was confirmed by follow-up radial velocity (RV) measurements with the High Accuracy Radial velocity Planet Searcher (HARPS) spectrograph on the ESO 3.6 m telescope in Chile.

“We present the detection and the analysis of the hot and volatile rich planet TOI-2196 b. It is smaller than Neptune but 50% more massive, resulting in a high bulk density for this type of planet,” the researchers wrote in the paper.

The observations found that TOI-2196 b is about 3.5 times larger than the Earth and 26 times more massive than our planet. This gives a bulk density at a level of approximately 3.31 g/cm3.

TOI-2196 b has a relatively short orbital period of about 1.2 days, which implies a high equilibrium temperature of some 1,860 K. Therefore, the astronomers noted that TOI-2196 b is a hot sub-Neptune and represents the so-called hot Neptune desert.

“The hot Neptune desert is a region hosting a small number of short-period Neptunes in the radius-instellation [or equilibrium temperature] diagram. Highly irradiated planets are usually either small (less than 2 Earth radii) and rocky or they are gas giants with radii greater than 1 Jupiter radii,” the authors of the paper explained.

The results suggest that while the mass loss of TOI-2196 b at a young age could have been significant, the planet has not changed in terms of its character. The researchers assume that It formed as a small volatile-rich planet and has remained one until today.

According to the study, the host star TOI-2196 (other designation TIC 372172128) is the size and mass of the sun. It has an effective temperature of 5,634 K and its age is estimated to be 4.5 billion years. The astronomers suppose that the star may be orbited by another object. This outer body may be a warm or cold gas-giant planet, although a brown dwarf, or a very low-mass stellar companion, cannot be fully excluded. However, long-term RV monitoring is needed in order to verify this hypothesis.

Lord Of The Rings Dwarvish And Elvish Keyboards Revealed, Cost $170 Each

First Reactions To The Super Mario Bros. Movie Are…