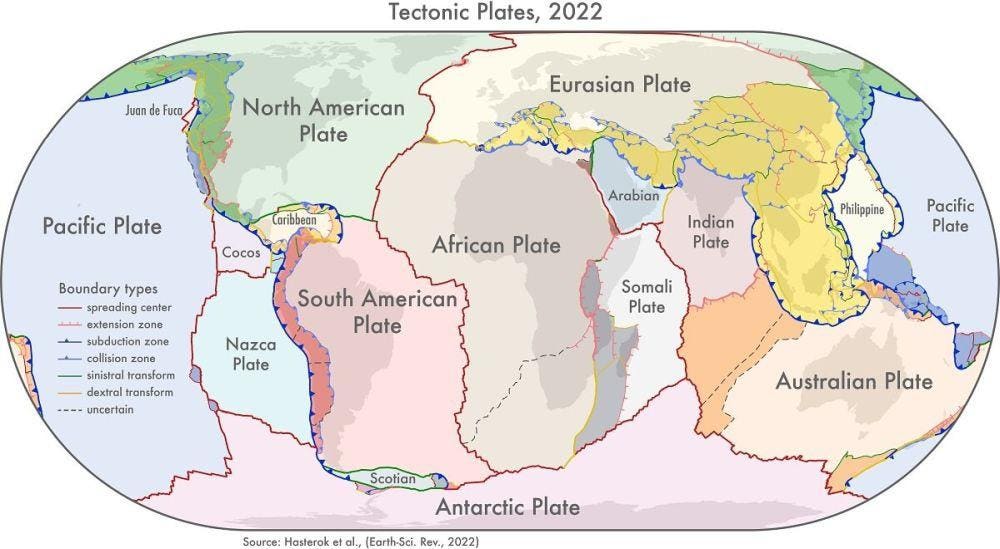 Based on a series of models considering how the continents were assembled over time, a team of researchers at the University of Adelaide created an updated map of Earth’s tectonic plates. The map will help provide a better understanding of natural hazards like earthquakes and volcanoes occurring along plate boundaries.

“We looked at the current knowledge of the configuration of plate boundary zones and the past construction of the continental crust,” said Dr. Derrick Hasterok, Department of Earth Sciences, who led the team that produced the models.

The cratons of our modern continents – the continental cores with the oldest and thickest crust – formed more than 3.2 billion years ago. Over time, more and more crustal fragments formed, pushed together by convection currents in Earth’s mantle, forming the first supercontinent called Vaalbara. These collisions were accompanied by mountain-forming processes along the boundaries of the tectonic plates. Eventually, Vaalbara broke apart, forming a subset of smaller continents. In the last 3 billion years a number of supercontinents formed and broke apart again, with the most recent being Pangea, a supercontinent existing from 335 to 65 million years ago.

“The continents were assembled a few pieces at a time, a bit like a jigsaw, but each time the puzzle was finished it was cut up and reorganized to produce a new picture. Our study helps illuminate the various components so geologists can piece together the previous images,” explains Hasterok.

“There are 26 orogenies—the process of mountain formation—that have left an imprint on the present-day architecture of the crust. Many of these, but not all, are related to the formation of supercontinents.

Our work allows us to update maps of tectonic plates and the formation of continents that are found in classroom textbooks. These plate models which have been assembled from topographic models and global seismicity, have not been updated since 2003.”

The new plate model includes several new microplates including the Macquarie microplate which sits south of Tasmania and the Capricorn microplate that separates the Indian and Australian plates.

“To further enrich the model, we added more accurate information about the boundaries of deformation zones: previous models showed these as discrete areas rather than wide zones,” said Hasterok.

The biggest changes to the plate model have been in western North America, which often has the boundary with the Pacific Plate drawn as the San Andreas and Queen Charlotte Faults. But the newly delineated boundary is much wider, approximately 1,500 kilometers, than the previously drawn narrow zone.

The other large change is in central Asia. The new model now includes all the deformation zones north of India as the plate bulldozes its way into Eurasia.

The team’s work provides a more accurate representation of the Earth’s structure and has other important practical applications.

The paper “New maps of global geological provinces and tectonic plates” is published in the journal Earth-Science Reviews (2022). Materials provided by the University of Adelaide.

Denial of responsibility! TechCodex is an automatic aggregator of the all world’s media. In each content, the hyperlink to the primary source is specified. All trademarks belong to their rightful owners, all materials to their authors. If you are the owner of the content and do not want us to publish your materials, please contact us by email – [email protected]. The content will be deleted within 24 hours.
EarthPlate TectonicsUniversity of Adelaide
0
Share