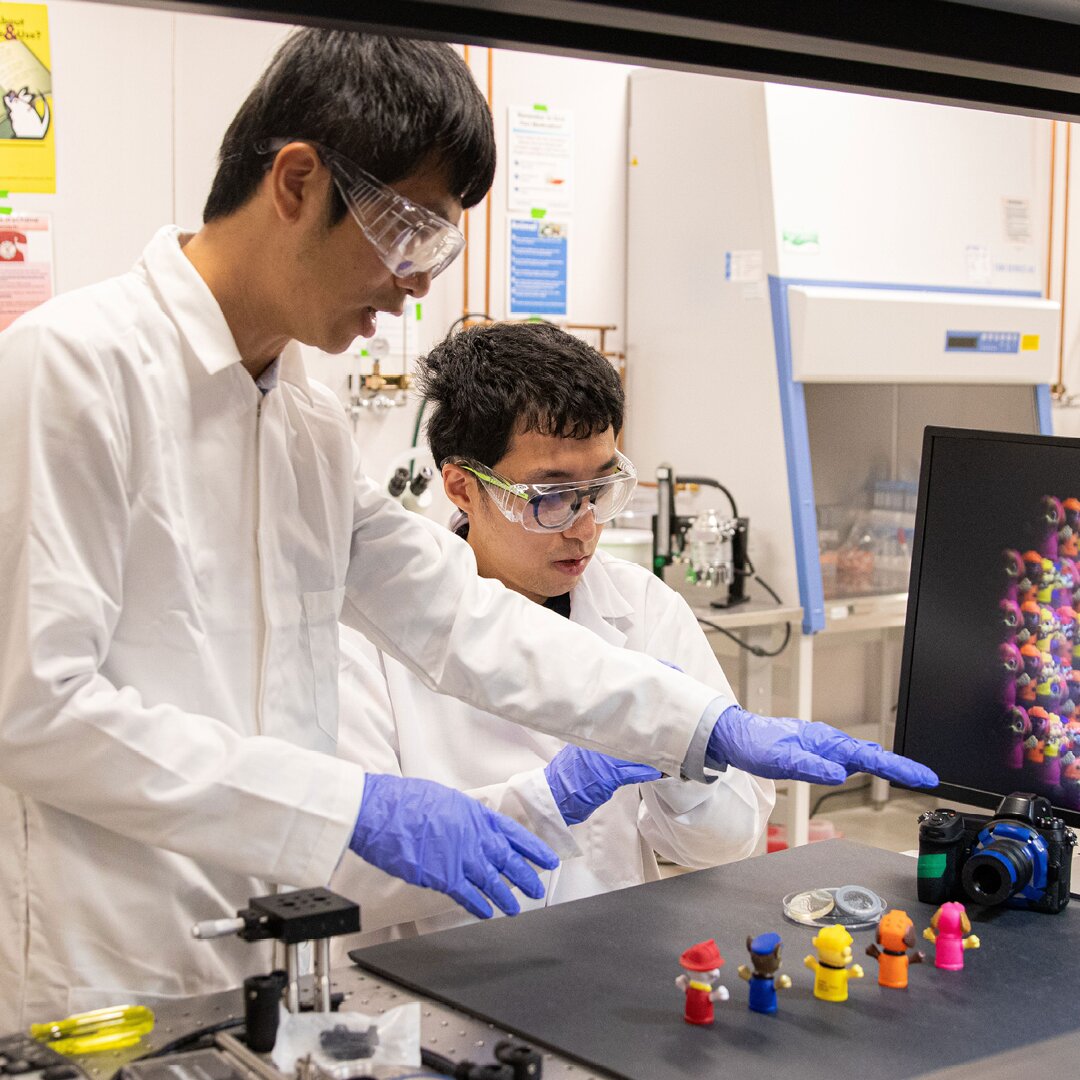 Researchers have developed a camera that uses a thin microlens array and new image processing algorithms to capture 3D information about objects in a scene with a single exposure. The camera could be useful for a variety of applications such as industrial part inspection, gesture recognition and collecting data for 3D display systems.

“We consider our camera lensless because it replaces the bulk lenses used in conventional cameras with a thin, lightweight microlens array made of flexible polymer,” said research team leader Weijian Yang from the University of California, Davis. “Because each microlens can observe objects from different viewing angles, it can accomplish complex imaging tasks such as acquiring 3D information from objects partially obscured by objects closer to the camera.”

In the journal Optics Express, Yang and first author Feng Tian, a doctoral student in Yang’s lab, describe the new 3D camera. Because the camera learns from existing data how to digitally reconstruct a 3D scene, it can produce 3D images in real time.

“This 3D camera could be used to give robots 3D vision, which could help them navigate 3D space or enable complex tasks such as manipulation of fine objects,” said Yang. “It could also be used to acquire rich 3D information that could provide content for 3D displays used in gaming, entertainment or many other applications.”

A camera that learns

The new camera grew out of previous work in which the researchers developed a compact microscope that can image 3D microscopic structures for biomedical applications. “We built the microscope using a microlens array and thought that a similar concept could be applied for imaging macroscopic objects,” said Yang.

The individual lenses in the new camera allow it to see objects from different angles or perspectives, which provides depth information. Although other research groups have developed cameras based on single-layer microlens arrays, it has been difficult to make them practical because of extensive calibration processes and slow reconstruction speeds.

To make a more practical 3D camera for macroscopic objects, the researchers considered the microlens array and the reconstruction algorithm together rather than approaching each separately. They custom designed and fabricated the microlens array, which contains 37 small lenses distributed in a circular layer of polymer that is just 12 millimeters in diameter. The reconstruction algorithm they developed is based on a highly efficient artificial neural network that learns how to map information from the image back to the objects in a scene.

“Many existing neural networks can perform designated tasks, but the underlying mechanism is difficult to explain and understand,” said Yang. “Our neural network is based on a physical model of image reconstruction. This makes the learning process much easier and results in high quality reconstructions.”

Once the learning process is complete, it can reconstruct images containing objects that are at different distances away from the camera at a very high speed. The new camera doesn’t need calibration and can be used to map the 3D locations and spatial profiles—or outlines—of objects.

After performing numerical simulations to verify the camera’s performance, the researchers performed 2D imaging that showed perceptually pleasing results. They then tested the camera’s ability to perform 3D imaging of objects at different depths. The resulting 3D reconstruction could be refocused to different depths or distances. The camera also created a depth map that agreed with the actual object arrangement.

The researchers are currently working to reduce artifacts, or errors, that appear in the 3D reconstructions and to improve the algorithms to gain even higher quality and speed. They also want to miniaturize the overall device footprint so it could fit into a cellphone, which would make it more portable and enable more applications.

Toby Fox says not to expect another Deltarune chapter this year