Missing in action: Apple’s best-selling product, the iPhone. New editions of Apple’s flagship device have been delayed until October.

The first product consumers will be able to see from Apple is iOS 14, the update to its mobile operating system, which will be available for free Wednesday. New tools for translations, improved mapping, smarter Siri and the ability to redesign your home screen with widgets are a few of the new features worth checking out.

Software: Apple iOS14: 5 features I really like – and one I’m not so crazy about

The rest of the lineup:

The top-of-the-line Series 6 Watch sells for $399, while a budget version called the SE, offering a faster processing chip than the older $199 Series 3 Watch, starts at $279. The new watches will be available Friday.

Apple said the Series 6 has a faster processing chip and a 2.5 times brighter face that will make it easier to read in bright sunlight. A new health feature lets owners check their blood oxygen level from the Watch.

The SE has a slightly slower chip but includes all the health features, Apple said. The company will continue selling the older Series 3 from 2017 for $199.

The Watch has turned into a solid hit for Apple, selling as many as 31 million units in 2019, according to researcher Strategy Analytics.

Apple’s Services division has become the No. 2 division, in revenue, after the iPhone, with recurring sales of online backup, music and TV streaming and gaming. Apple is looking for more ways to keep the steady income coming in.

The new services: Fitness+ for workouts and Apple One, which combines various Apple services for backup, music, gaming, news and TV.

Fitness+ offers the same sort of workouts favored by owners of the Peloton bike, with the addition of yoga, walking and other exercises, and works in conjunction with the Apple Watch to see metrics. Peloton charges $12.99 monthly for the video sessions. 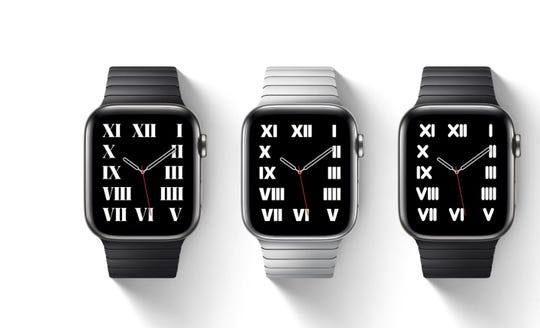 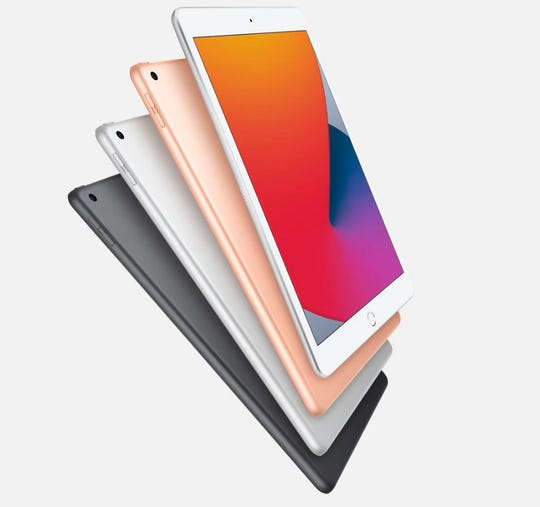 Apple updated the iPad line with a refresh of the iPad Air, sans a Home button and Face ID, instead using the older Touch ID but this time built into the side button of the tablet. Additionally, iPad fans who’ve gotten used to charging their Air with the Lightning connector will need a new and different format charger, the USB-C.

Apple updated the entry-level edition of the iPad, the 8th generation model, with a more powerful chip. It sells for $329 and will be available Friday. The new Air, with what Apple says is its most powerful A14 Bionic chip, will sell for $599 and won’t be available until October.

The iPad, first introduced in 2010, was a runaway hit initially, then cooled off. But in the face of the COVID-19 pandemic and the move to learning and working at home, the iPad has seen major growth.

In the most recent earnings, Apple said it sold $6.5 billion worth of iPads in the quarter, up from $5.5 billion in the year-ago quarter.

Rival tablets from Samsung and Amazon compete with the iPad. Samsung just announced new Galaxy tablets, the S7 and S7+, starting at $829 and $1,029, and has other models available starting at $149. The Amazon Fire tablets are more affordable, starting at $89.