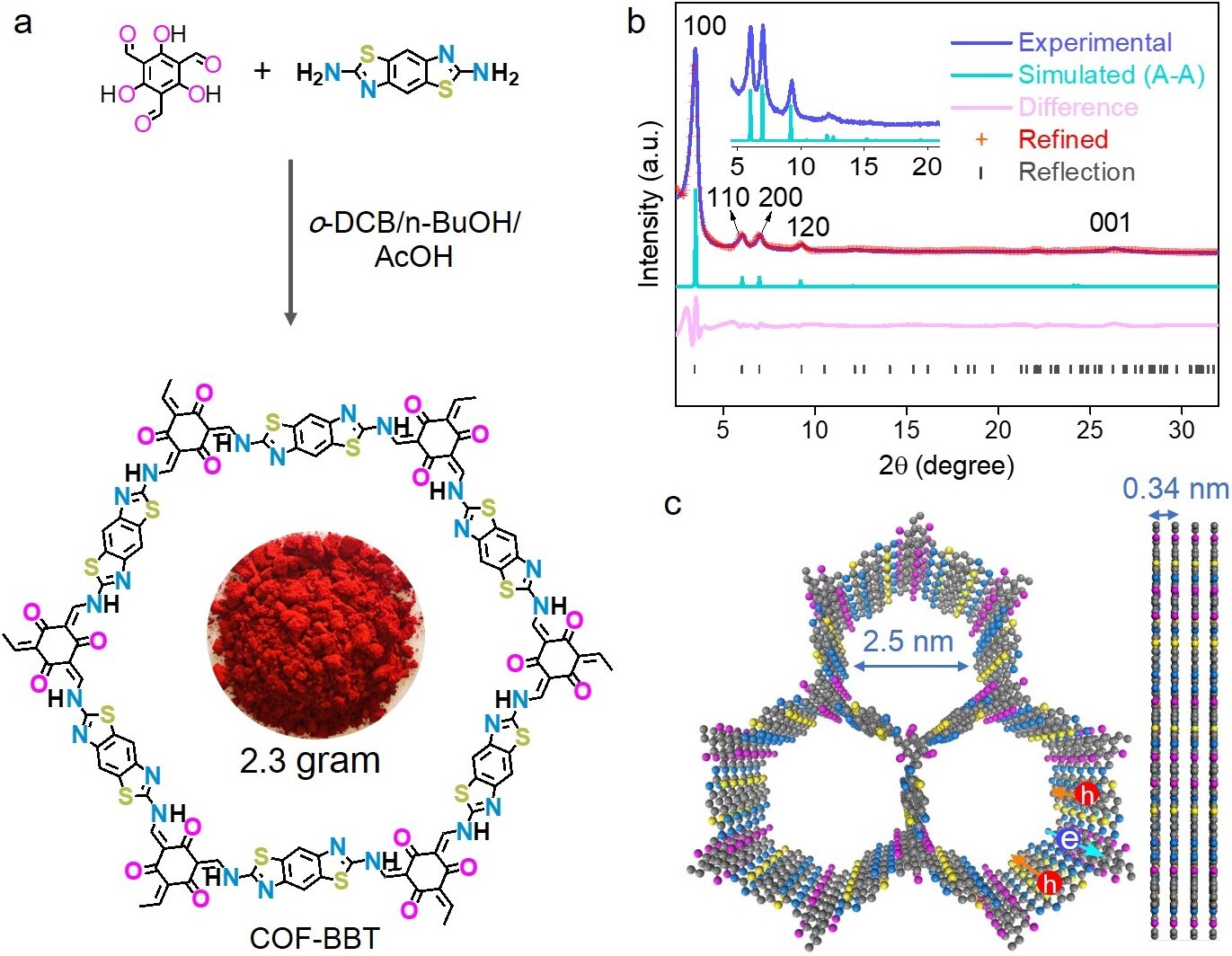 Two-dimensional covalent organic frameworks (2D COFs) are a new class of organic semiconductors, and have recently demonstrated great potential for solar fuel production. They are generally formed from the ordered π-π stacking of molecular layers, and usually possess periodic columnar π-arrays that can facilitate the interlayer charge transfer.

This is mainly due to the large binding energy of the photoexcitons in organic matters and consequently problematic exciton dissociation. In addition, the hydrophobic nature of their π-conjugated aromatic backbones often cause their large inner porosity inaccessible to water. To fulfill the full potential of 2D COFs, synthetic and structural modifications are thereby desired to promote their structural crystallinity and water wettability.

Recently, Professor Yanguang Li from Soochow University and collaborators reported a benzobisthiazole-based covalent organic framework (COF-BBT). The catalyst exhibited an excellent photocatalytic hydrogen evolution rate as high as 48.7 mmol h-1 g-1 in the presence of ascorbic acid as the sacrifical electron donor—among the highest values ever reported for COF-based photocatalysts. It was found that the benzobisthiazole (BBT) units played a profound effect on its electronic property and catalytic performance.

On the one hand, the BBT groups had rigid planar molecular configurations, and were believed to promote structural crystallinity via π-π interactions between individual aromatic blocks. Such an ordered stacking of π-units not only enhanced electrons delocalization between layers, but also provided necessary channels for the migration of photogenerated charges to the surface.

This hypothesis was validated by a series of spectroscopic measurements. Transmission electron microscopy (TEM) analysis first corroborated the high structural crystallinity of COF-BBT. Its 1D mesoporous channels and their hexagonal arrangement could be clearly observed.

Photophysical analysis showed that crystalline COF-BBT had a weaker fluorescence emission and a longer excited state lifetime compared to the amorphous counterpart with the same chemical structure, indicating that the charge recombination was suppressed in COF-BBT.

On the other hand, BBT was an aromatic heterocycle rich in nitrogen and sulfur (> 50 wt%). The introduction of BBT units would lead to the increase structural polarity and thereby enhance water affinity of COF-BBT. This was confirmed by its much smaller water contact angle (21°) and larger water vapor absorption capacity when compared with one sample without any heteroatoms. Both the increased crystallinity and water wettability collectively contributed to the excellent photocatalytic performance of COF-BBT.

For practical applications, the authors demonstrated that COF-BBT could directly grow on macroporous melamine foams by in-situ polymerization. The obtained composite not only enabled the stable hydrogen production, but also could be simply retrieved by taking out the foam from the solution. Furthermore, the authors also demonstrated that photocatalytic hydrogen production could be coupled with the oxidation of furfuryl alcohol to 2-furaldehyde at stoichiometry.

The research was published in National Science Review.

Microsoft is planning to bring new features to Windows Subsystem for Android, including Android 13