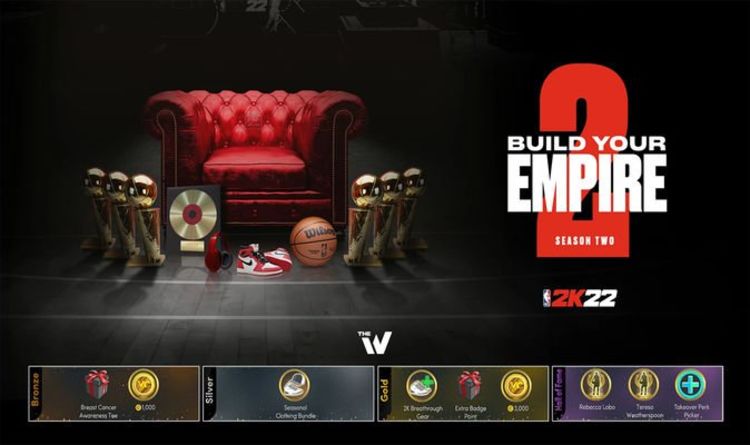 NBA 2K22 Season 2 is starting this week and is promising to add new content across MyCAREER, MyTEAM and The W for those on PS5 and Xbox Series X consoles.

Season 2 also features the first music label partnership with Columbia Records, although that might just prove a pleasant distraction when compared to the main features included in the game’s next major update.

NBA 2K22 Season 2 has the tagline Build Your Empire and focuses on Michael Jordan’s rise to legend status in MyCareer.

A message from 2K explains: “When Michael Jordan joined the Chicago Bulls in 1984, the team’s reputation wasn’t anywhere close to what it is today. The Bulls were searching for their star player, and they found one in MJ, who carried them on his path to becoming a legend.

“In Season 2, you’re the hero; whether you’re climbing the ladder to NBA stardom, running the streets, or building your dream team, anyone can be the next Michael Jordan.

“We all start from humble beginnings, but now it’s time to thrust yourself into the spotlight and achieve glory.

“Coming to both the City [PlayStation 5 | Xbox Series X/S] and the Neighborhood [PlayStation 4, Xbox One, Nintendo Switch, and PC], players will have the opportunity to earn an all-new variety of content and goodies by levelling up with XP. Build Your Empire and accumulate more fame and rewards as a result.”

Rebirth is also making its debut in NBA 2K22 MyCAREER and gives players the opportunity to jump to a 90 overall on new-gen or skip 10 pre-completed MyPOINTS levels on current-gen.

This can be achieved after earning the Rebirth reward. For new-gen players, you must first obtain the quest from ATM by the NBA Store and Club 2K before you can begin completing 10 3v3 or 10 2v2 City games with a 90 overall rating or higher to unlock Rebirth.

Current-gen players will need to complete 10 3v3 games once they reach a 90 overall rating to earn Rebirth.

But MyCareer is just one of a number of areas of the game that is getting new content this week, with 2K confirming fresh features in other areas.

Meanwhile, The W is getting a new Seasonal Clothing Bundle, 2K Breakthrough Gear, and more.

THE NBA 2K22 Season 2 release date has been scheduled for Friday, October 22, across all platforms.

2K has also provided a rough schedule for when to expect some of the big events to kick off.

According to a new announcement from the development team, NBA 2K22 Season 2 start time has been set for 4pm BST on October 22, or 8am PDT if you live in North America.

The first events will start at 9pm PDT with a party at Club 2K, where you can celebrate by listening to all the newest music while earning 2XP.

This event is only available on PlayStation 5 and Xbox Series X|S, although plenty of other stuff is being planned for different areas of the game.

Facebook Oversight Board says it will review cross-check program

All Exotic And Mythic Weapons In Fortnite Chapter 3, Season 1