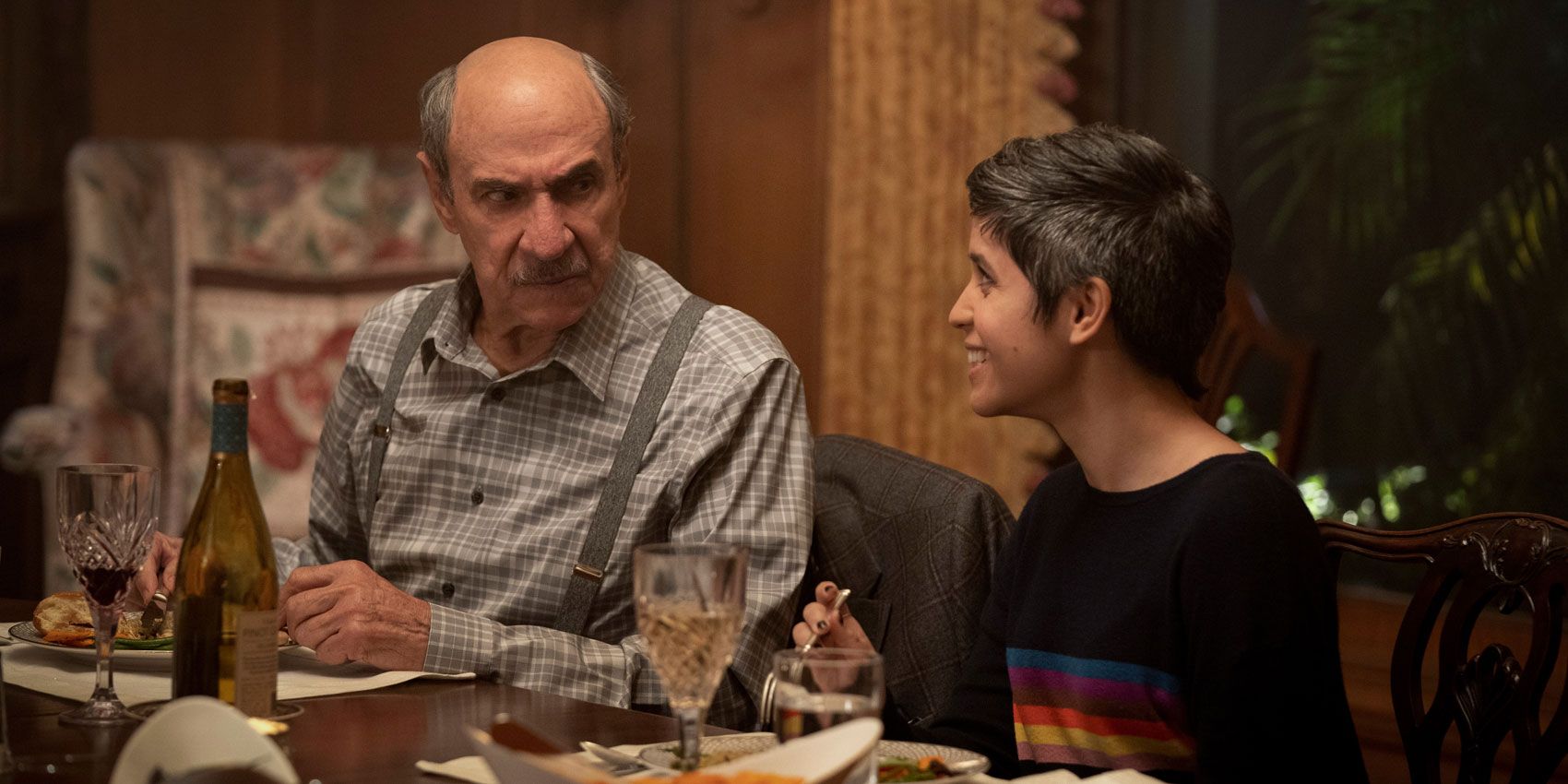 Mythic Quest: Raven’s Banquet is nearing the end of its second season, and the journey so far has been extraordinary. The Apple TV+ comedy’s newest episode, “Peter,” features game tester Rachel (Ashly Burch) accompanying famed sci-fi author and creative consultant C.W. Longbottom (F. Murray Abraham) as he pays a visit to an old friend named Peter (William Hurt). Peter is, of course, the same friend we met in the previous week’s episode, “Backstory,” but now with decades of life behind them, the two men have an intimate visit that goes to some truly wild places.

During a recent press event, Collider spoke with Abraham, Burch, and co-star Imani Hakim (who plays Rachel’s fellow game tester and girlfriend) about Season 2 — including what it was like to make the “Peter” episode, what Burch has observed about the game industry’s response to the show, why Dana and Rachel’s relationship is so important, what they’d like to see happen in a potential third season, and how this show surprised them in going deeper than expected.

Collider: I’d like to start off by asking what have you learned about the very new art of Zoom acting?

F. MURRAY ABRAHAM: Well, the experts in LA would say I’ve learned nothing. I keep trying, you know. I’ve learned that it works, I can tell you that, which was a big revelation. The idea that we can get the quality that’s necessary to be acceptable for broadcasting on an Apple phone, it’s a big eye-opener. It really means… I don’t know. It’s a revolution to me, it’s a revelation as well, even though they’ve been around for years. So yes, it’s a whole new world.

It’s such an interesting season for your role, because of course, you’re on the sidelines for a bit of it, but then you have that amazing episode with Ashly and William Hurt.

ABRAHAM: I was so proud of that, I thought well, we did such good work I think. He and I had a very strong connection, and I think it shows. Pretty good material though, don’t you think? It was like doing a stage play.

ASHLY BURCH: I have to say, I was nervous going into it, because I’d worked with Murray, of course, and we have a really good rapport, but I had just met William right beforehand, and here are two Oscar winners, and I basically was just like, “I need to not get in their way.” I just need to let them do their thing, and be amazing, and pop in every so often. But of course, Murray’s lovely, and William was really lovely, and it was amazing. I remember we had a table read, and it was like watching a play, just seeing them circle each other like hawks, it was so cool. I think I remember leaning over to Todd, who directed the episode, and I was like, “This is awesome.” It was just really fun, and it’s so different than anything else in the rest of the season or in the show, and it was really cool to be a part of it and to get to watch.

When it comes to this show, where it’s easy to assume it’s just a workplace comedy and it’s really not, when did you realize that that you were signing up for something a lot deeper?

HAKIM: For me, I believe I realized after coming to set and watching Episode 5 filmed, with Jake Johnson and like you said, the show really plays with… I mean it is a comedy, it’s a workplace comedy, but we kind of bend genres a little bit. It’s not just comedy, it has so much heart in it, and we really could explore that part of our show a lot deeper in Season 2. So you really can’t- what I love about the show that you really can’t put it in a box.

ABRAHAM: And the other aspect that you didn’t mention, which we all take for granted is how much we invest in it. In the serious parts of it, it’s still funny, it’s still really funny, and that’s a tribute, I think, to the expertise of the actors. It also indicates that they know so well who they are by this time, and I’m looking forward to the changes that are going to be happening. I mean, looking for them with great expectation.

RELATED: ‘Mythic Quest’ Season 2 Featurette Invites Us Behind the Scenes

Ashly, something I think you might be able to speak to is what the reaction has been like from the gaming world, now that those who work in this industry have been able to see the show?

BURCH: It’s been so positive, and also… It’s funny because obviously I come from games, and I know a lot of game devs, and they’re like, “This show’s a little triggering, because it’s too accurate.” Which I take as a massive compliment. Actually there was a Twitter thread that came out that had a clip of Sue talking from the first season, to the girls who can code, and talking about her job, and every single community manager in the games industry responded to that Twitter thread, saying, like, “Oh my God, this is my life. This is my life, this is me.”

And I had another friend who’s a creative director who watched the pilot episode, and when Ian throws a tantrum and storms out after that big group scene, he was like, “Ooh, that’s me.” It made him look at himself a little bit more. So it’s really great because for me personally coming into the writers’ room, I really wanted my little personal mission, but it was also the mission of our fearless leaders, Megan, Rob, and David, was to make something that felt accurate and honest to the games industry, while still being funny and acceptable to everyone. So the fact that it’s managed to achieve both of those things, is to me a huge victory. Which is that you can watch it knowing nothing about games and enjoy it as a workplace comedy, and if you do know games, you have this extra element of, “Oh, that’s pretty true,” or, “Oh, that is me,” or, “Oh God, I worked with that guy,” which is so great.

Absolutely. Another great aspect of the show is that the show has a real protectiveness towards the relationship between Rachel and Dana in the show. Imani, what has that experience been like for you?

HAKIM: I think it’s just really important that we have this type of romantic storyline. And because we don’t see a lot of this, we don’t get to see two women of color in the video game industry having a romantic connection so I think it’s really important that we’re able to highlight that on this show. And what’s really fun about Season 2 is that we get to dive deeper into that connection between Rachel and Dana. But also we get to explore the characters individually. Now that we’ve set them up in Season 1, Season 2 we’re like, okay, we know who these people are, now let’s see who they are outside of the testers room. Let’s shift it up a little bit. But it’s great to be a part of the storyline that’s the heart and the soul of the show.

To wrap up, looking forward towards a potential Season 3, what is the one thing you hope your character gets to do?

ABRAHAM: I want my character to fall in love.

ABRAHAM: Yeah. What’s better than that.

Do you have an idea of what that love interest would be?

ABRAHAM: Oh, well, I think it should be a tall middle-aged woman of color.

HAKIM: Everybody wants love. And for me, I am looking forward to Dana exploring her independence and her grit and her drive and her ambition outside of the game testing road.

KEEP READING: Rob McElhenney Explains How ‘Mythic Quest’ Pulled Off the Most Beautiful Moments of ‘Quarantine’

Justin Roiland on Writing ‘Rick and Morty’s Subversive Commercials: “I Try to Poke Fun at the Concept of Advertising”

The co-creator reveals his approach to selling real products using his iconic characters.

Liz Shannon Miller is a Los Angeles-based writer and editor, and has been talking about television on the Internet since the very beginnings of the Internet. She is currently Senior TV Editor at Collider, and her work has also been published by Vulture, Variety, The AV Club, The Hollywood Reporter, IGN, The Verge, and Thought Catalog. She is also a produced playwright, a host of podcasts, and a repository of “X-Files” trivia. Follow her on Twitter at @lizlet.

Fresh set of Google Pixel 6 and 6 Pro cases size up the 4 XL, hint at a zoom camera return