That spooky time of year is upon us, which means its time for the usual round of Halloween events, and Call of Duty: Modern Warfare and Warzone are going all out. The Haunting of Verdansk kicks off tomorrow and includes licensed Leatherface and Jigsaw skins, a spooky nighttime variant of Verdansk, new modes, including a full Zombie Royale, and more! You can check out a quick trailer for The Haunting of Verdansk, below.

Here’s a rundown of the content coming specifically to Call of Duty: Warzone:

Available in select Warzone modes such a Trios, Verdansk is now open for nighttime infiltrations. Although the full moon’s glow prevents total darkness, operators might want to still pack some Thermal optics in their Loadout Drops to help spot enemies lurking about in low-light areas or use Cold-Blooded to counter these high-tech tools.

No matter the operation, visiting Verdansk at night will leave operators open to a few frights. Some say that a ventriloquist doll frequently appears on television sets tuned to defunct channels, and the poltergeist of a chainsaw-wielding killer can be seen and heard across the Krovnik Farmland. Others claim that the defunct tracks near the Train Station are still in use by a ghost train, a vessel filled with souls of those who lost their lives fighting in the Gulag. Given Dr. Karlov’s existence, it’s best to treat the rest of Verdansk’s Halloween myths as fact, or at least believe them to be true until November 3.

When the clock strikes midnight in Verdansk, it’s time to bring out the undead. Operators can fight against and alongside powerful zombified creatures as part of Zombie Royale, a limited-time mode where death is far from permanent. Instead of being sent to the Gulag, dead Operators will come back to life as a zombie. Although zombies cannot use weapons, they have supernatural abilities: increased speed, improved jumps, deadlier melee attacks, and thermal vision.

Feeling Zombified? Time to fight your way back into the land of the living. When a player is killed, they drop a syringe that shows up on the map. Collect two of these Syringes as a Zombie and you’ll parachute back in with your loadout on your Squad for a second chance! The last squad standing with a surviving Operator wins… even if the rest of the squad has turned undead. 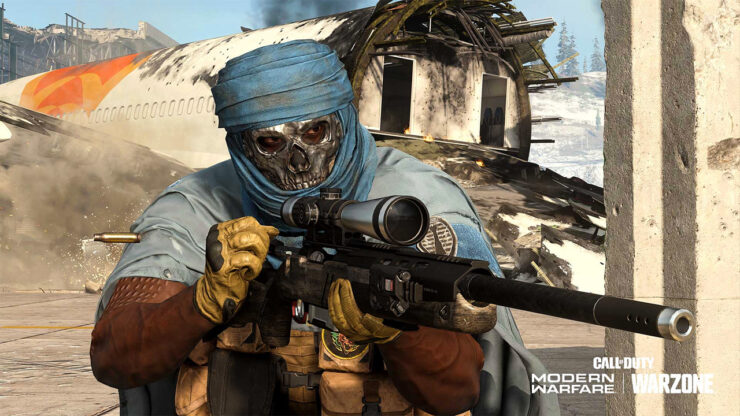 And here’s your new Call of Duty: Modern Warfare content:

The Spirit of All Hallows’ Eve is Alive in Multiplayer

From Gunfight to Ground War and everything in between, expect the head of any operator to turn into a jack-o-lantern upon reaching three kills in a single life. This pumpkin head will then be set aflame if that operator reaches ten kills in a single life, an intimidating sight to go along with a Specialist Bonus or a high-end Killstreak. Don’t think of this as just a spooky cosmetic change; these indicators can help you identify Operators who need to be smashed before they continue on their killstreak, especially if they are lighting up the lobby both with their flaming pumpkin head and their performance in-game.

New Modes: Onslaughter and Snipers Only 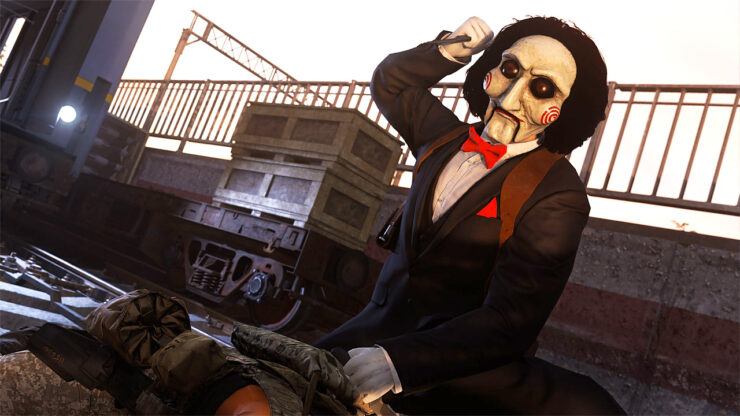 Finally, yes, players will be able to download a couple of iconic horror movie skins to use in both Modern Warfare and Warzone:

Be ready to don the garb of Billy the Puppet in the SAW bundle and take an enemy operator’s choice to live or die in his own hands. Along with the “Billy” skin for Morte, the SAW Bundle features The Phlebotomozier Lethal Equipment piece, a special throwing knife will drill into your enemies upon impact. And oh yes, there will be blood… if it lands on target.  Rather end your enemy’s game with blood-red tracer fire? Two SAW-themed blueprint weapons – one Assault Rifle and one Shotgun – are included in this bundle, as well as a Cargo Truck skin, tricycle Charm, and four other pieces of personalization content.

The legacy of this cannibalistic maniac, whose mad and macabre reign of terror in 1974 was unlike anything ever seen before, is set to live on through the “Leatherface” skin for Velikan, as well as the “Family Heirloom” LMG blueprint, complete with a unique Stock attachment that allows an operator to wield the weapon like a chainsaw. As players are re-introduced to the malice of Leatherface, a clue as to what happened to the notorious murderer may even appear to those with a keen eye.

This bundle also includes the “Anybody Home?” melee blueprint that turns this Secondary into a one-handed hammer (with a bone-breaker on one side, and a meat tenderizer on the other side), which some hitchhikers claim is “the better way” of slaughtering cattle, as well as an SMG blueprint weapon, a vehicle horn, and five additional Texas Chainsaw Massacre-themed items.

Phew! That’s a lot of stuff! And we haven’t even got into all the new weapons and cosmetics. Here’s a full visual breakdown of all the free content included in The Haunting of Verdansk (click on the image for full resolution). 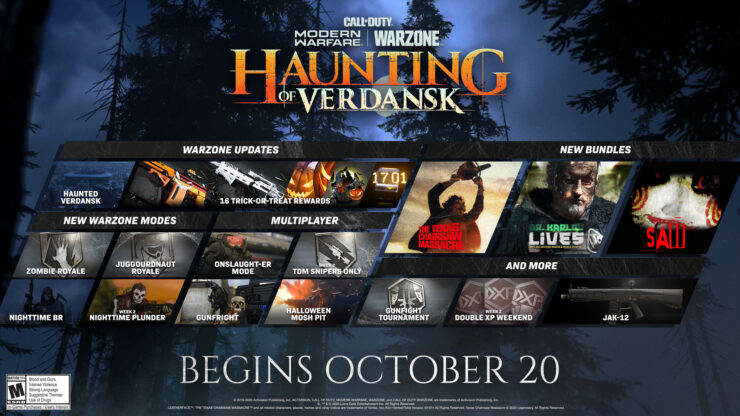 Call of Duty: Modern Warfare and Warzone are available now on PC, Xbox One, and PS4. The Haunting of Verdansk event kicks off on tomorrow (October 20) and runs until November 3.

Tesla scales back its warranty on used cars

Google is making using PDFs in Docs better and easier

PS5 and Xbox Series X in Stock at Walmart Canada This Week, Delivery…