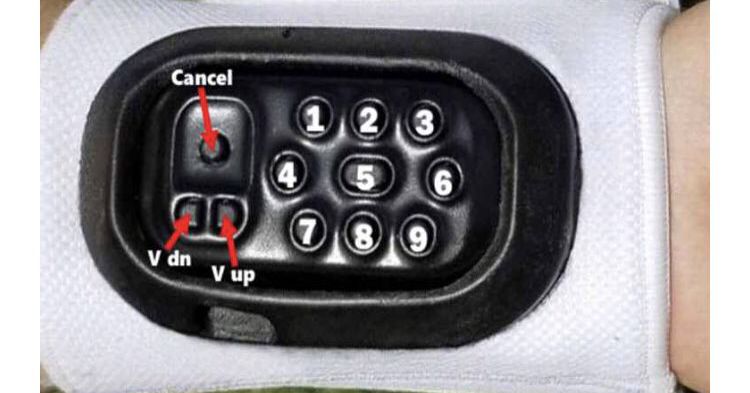 Baseball has a sign stealing problem — or at least, a technological one, seeing how reading another team’s pitches is technically legal, but using Apple Watches or telephoto cameras and then suspiciously banging on trash cans is very much not. But soon the MLB may try fighting fire with fire: on August 3rd, it plans to begin testing an encrypted wireless communication device that replaces the traditional flash of fingers with button taps, according to ESPN.

The device, from a startup called PitchCom, will be tested in the Low-A West minor league first. As you’d expect from something that’s relaying extremely basic signals, it’s not a particularly complicated piece of kit: one wristband transmitter for the catcher with nine buttons to signal “desired pitch and location,” which sends an encrypted audio signal to receivers that can squeeze into a pitcher’s cap and a catcher’s helmet.

The receivers use bone-conduction technology, so they don’t necessarily need to be up against an ear, and might theoretically be harder to eavesdrop on. (Bone conduction stimulates bones in your head instead of emitting audible sound.) That said, it sounds like introducing the tech may come with other risks. Here’s a list of restrictions as cited by ESPN:

Players found to be wearing a receiver while batting will be ejected; only the active catcher, and no other players or coaches, is allowed to use the transmitter; a backup transmitter is provided, but it must remain in the carrying case during games; and if players and coaches need to confer because of an issue with the device, they can notify the umpires and not be charged a mound visit.

MLB seems optimistic about the idea so far. “The PitchCom devices were tested in side-sessions during major league spring training, and the feedback from players, coaches, and front office staff was extremely positive,” reads part of an internal memo obtained by the Associated Press. “Based on those preliminary results, we are optimistic that these devices have the potential to be a viable long-term option to reduce sign-stealing risk and improve pace of play, particularly with runners on second base.”

I wasn’t able to find records for a startup named PitchCom, but one of its founders, a Craig Filicetti, appears to be the same one who sells “ProMystic” wireless tech for magicians and mentalists, such as a box of crayons that can wirelessly send a signal corresponding to the crayon that someone removes. ESPN cites Craig Filicetti and John Hankins as co-owners of Pitchcom, and two men by those names formed a “JHCF, LLC” in November 2020. Both ProMystic and JHCF have a Scottsdale, Arizona address in common.

Dexter Revival Gets Release Date, a Bloody Title and Synopsis

All Pirates of the Caribbean Movies in Order