When I was a kid, my father and I often watched VHS tapes of the ’90s X-Men series. He loved the mutants and how they faced similar adversities to what he dealt with in his life.

My father moved to Canada from Jamaica when he was 13, and as a young Black man in Toronto, he encountered a lot of racism. Just like many of the X-Men’s mutants, my dad faced discrimination because of what he looked like.

As a result of my dad’s influence, I’ve always loved superheroes, and the one I’ve seen the most adaptations of in my life is Spider-Man. Since 1967, several different Spider-Man TV shows have aired, and while I haven’t seen them all, I’ve watched a lot of them.

Growing up, I was fascinated by superheroes, but the vast majority of them — especially in animation — are white. While X-Men added some diversity with characters like Storm (my favourite hero ever) and Bishop, the focus has always been heroes like Jean Grey, Professor X, Wolverine and Cyclops. Series based on Batman, Superman and Spider-Man have always lacked diversity as well.

Diversity in superhero content — where the main character is a person of another race — is starting to get a lot better, thanks to films like Black Panther (R.I.P. Chadwick Boseman), 2021’s Shang-Chi and the Legend of the Ten Rings and TV series like Black Lightning, Marvel’s Luke Cage and the upcoming Ms. Marvel.

This is why I was ecstatic when I first saw Marvel’s Spider-Man: Miles Morales; finally, a superhero game exists where I can be Black.

Before Miles Morales, only one other video game has ever made me tear up. That title happens to be Insomniac’s 2018 Spider-Man when a crucial character, unfortunately, passes away.

Miles Morales was a completely different experience for me, however.

When I played it for the first time, just seeing Miles walking along the street listening to music, helping someone get their couch onto a moving truck, and walking with such joy made me feel overwhelmed. I was so happy to finally be playing a story-driven video game as a Black character that I started crying.

I’m the type of person who always tries to make my RPG characters Black when the option is available. For example, a single tear of joy rolled down my cheek when I made my Pokémon trainer Black for the first time, so playing as the Black Spider-Man, Miles Morales, was a dream come true.

Insomniac also did a good job with the character, and Nadji Jeter portrayed Miles excellently. Many of his mannerisms reminded me of my geeky but athletic little brother — who has just the normal amount swagger for a teen of any race. 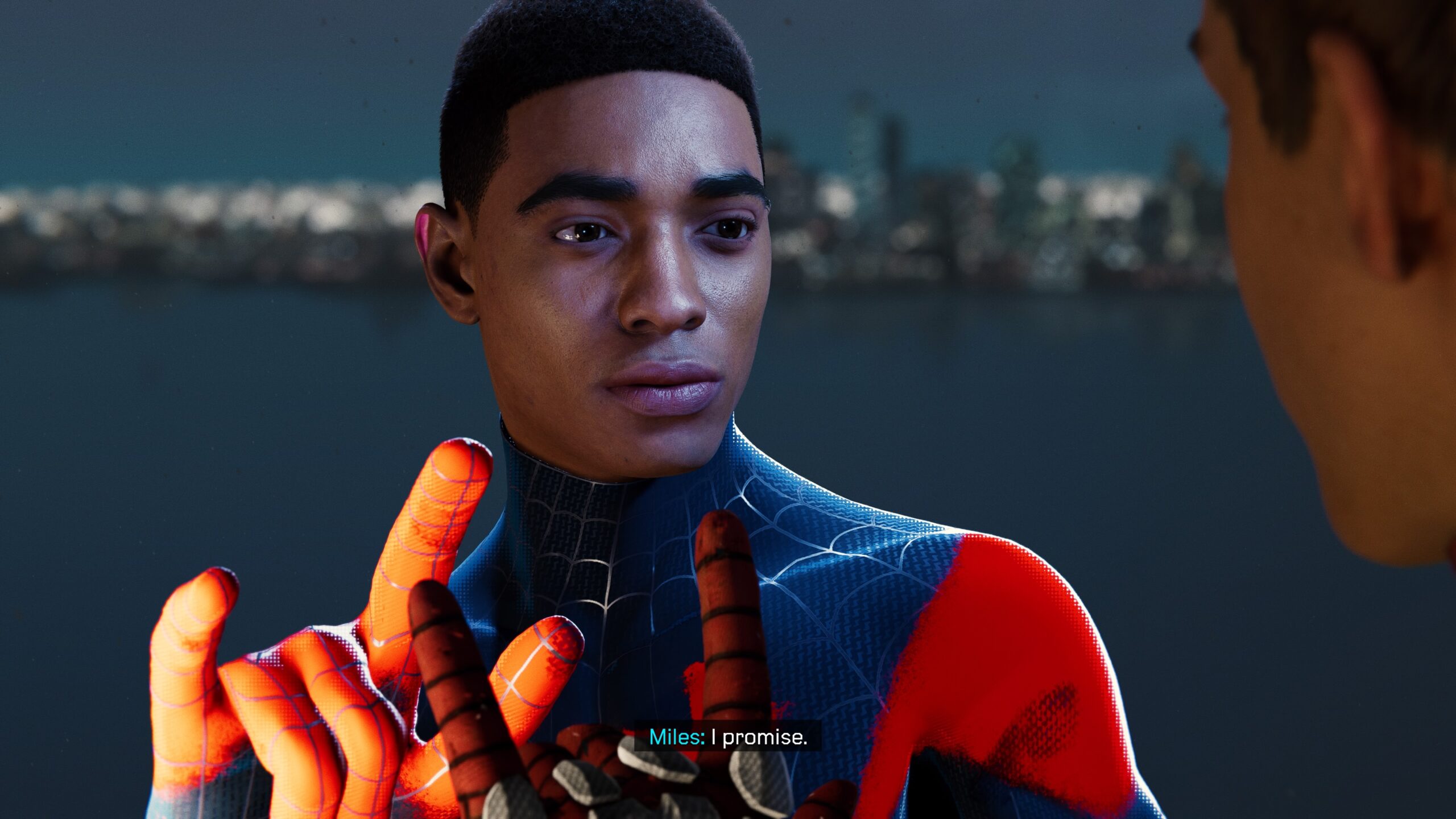 Being of African-American and Puerto Rican descent, Miles Morales is by no means a stereotype. He isn’t walking around low-riding, saying the N-word or using a gun. Miles is an ordinary teen; he likes basketball, won his school’s science contest, and goes to a prep school. He’s dorky, represented by him lowering his voice when talking to people he knows while in costume, and he’s taken an ASL class, so he’s able to speak to other characters in sign language. He’s also not that smooth with the ladies.

Miles does all this while being Harlem’s Spider-Man and helping out the people in his neighbourhood.

The second time I cried while playing Miles Morales was at the end of the game. This time, it wasn’t because of any particular event, but simply because Insomniac did such a great job of bringing Miles to life through a compelling story that stars an African-American/Hispanic protagonist. 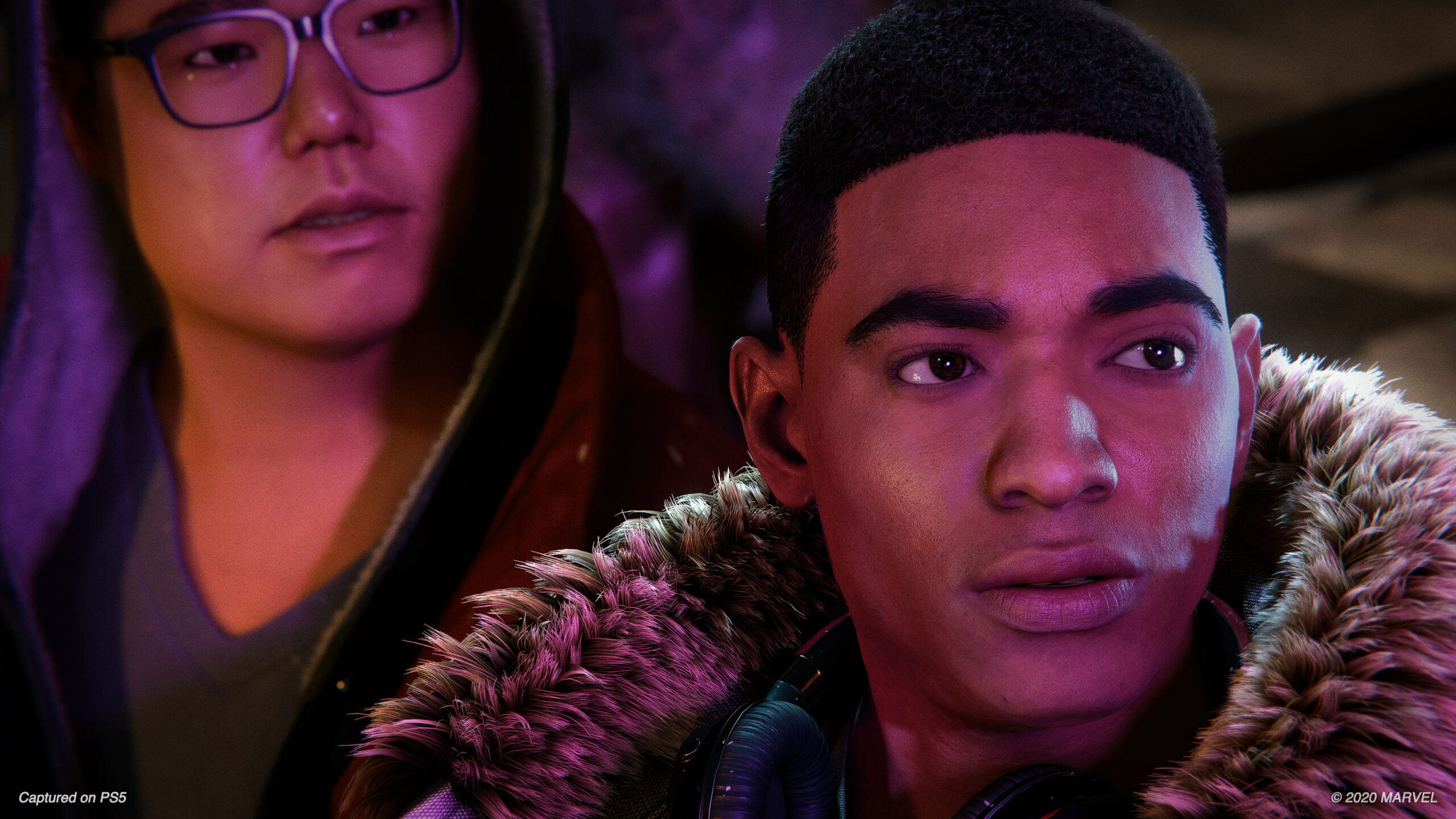 Miles Morales features a lot of inclusion, and I loved that it doesn’t feel like it’s pushing it in your face. For example, race isn’t a topic that’s brought up a lot in the game. It all felt natural despite Miles’ mom being Puerto Rican, his Korean best friend Ganke and his mentor Peter Parker being white.

At one point in the game, Miles meets a girl named Hailey, a person who is deaf. Similar to how race isn’t brought up often, Hailey isn’t defined by her deafness. She’s another black character who proves invaluable to the main storyline and a pretty cool sidequest, and I liked that there weren’t any awkward moments about it, either. While I don’t know sign language, I’ve watched quite a bit of content that focuses on the usage of ASL, and it looks like Insomniac did a lot of work to make the characters’ signs as realistic as possible — though I’m saying this based on my limited knowledge of the language.

On one occasion, Miles talks to Hailey in his Spider-Man suit, so it would have been nice if he raised his mask just over his lips so that she could read them, as his signing didn’t seem as good as the other character’s.

Additionally, the game has a couple of LGBT characters, such as Gloria, who works at F.E.A.S.T, and her girlfriend. Spider-Man: Miles Morales also doesn’t push this in your face much, though it’s also worth noting that neither character is very memorable. 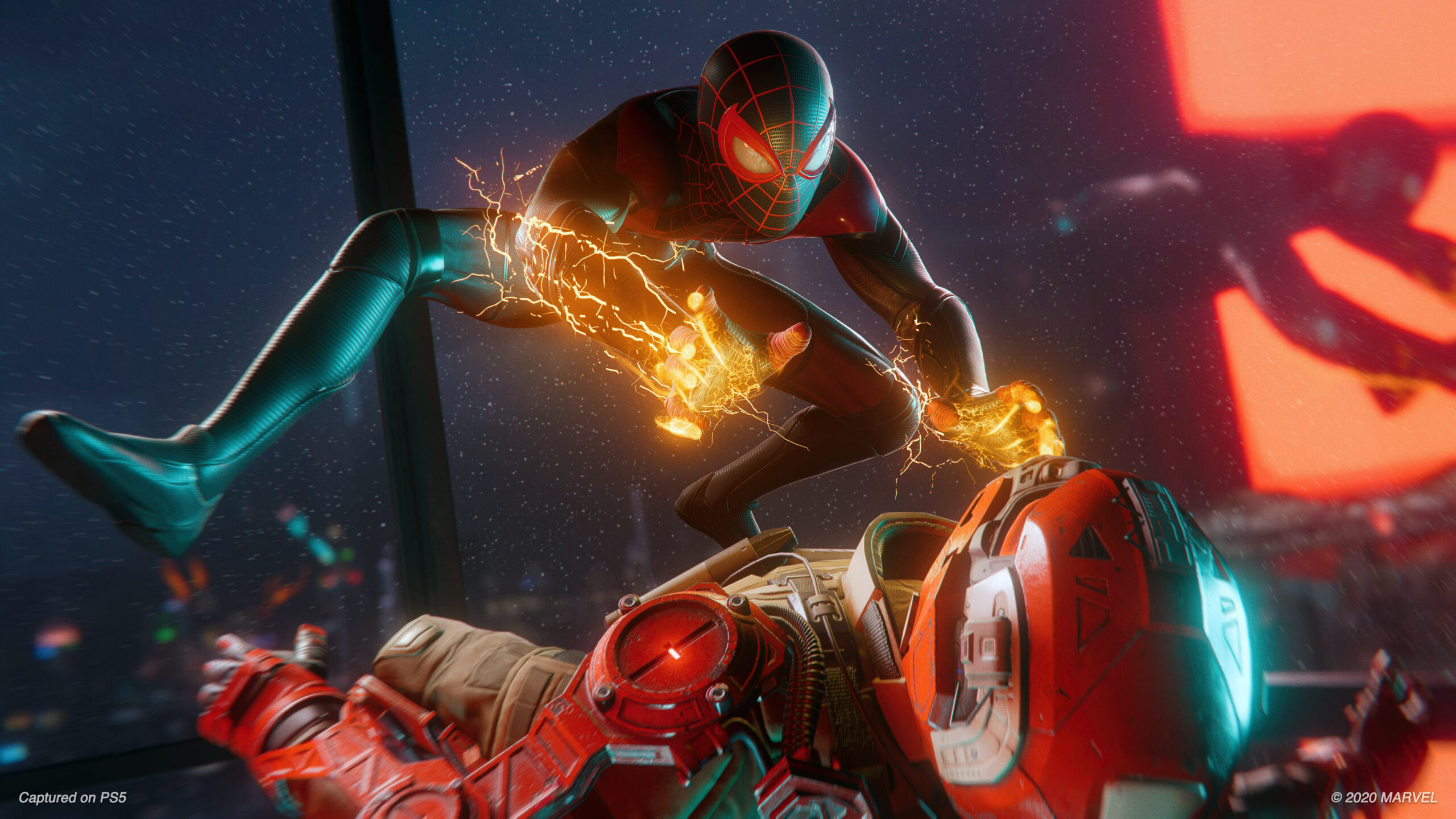 You’re first introduced to Miles in 2018’s Marvel’s Spider-Man, where you sometimes play as him on stealth missions without any powers, so they weren’t always fun.

However, Miles Morales isn’t a full successor to the developer’s original Spider-Man game and is more of an eight- to ten-hour expansion to the story. To be clear, it’s a completely separate game, but not a full experience.

Because it isn’t a full game, the storyline isn’t bloated and focuses on what’s important: Miles and his relationships with his mother, uncle, Ganke and a childhood friend that he reconnects with.

While some people might be offended that Miles Morales isn’t a complete standalone game, I feel like it’s an excellent appetizer of what to expect from the series in the future. That’s not to say that the next Spider-Man game needs to focus on Miles or else I’ll be upset, but it’s still a taste of the future for the younger Spider-Man.

And even though it isn’t a full game, Miles plays a lot differently than Peter did in the original Marvel’s Spider-Man title.

First, as a newer Spider-Man, Miles lacks some of the grace that Peter has. For example, you’ll sometimes see him stumble while landing, or when he’s performing a takedown from above, he looks like he might trip. Miles also has several powers that the original Spider-Man doesn’t. He has a ‘Venom Punch’ attack which allows him to strike with electricity, and he’s able to turn invisible with his Camouflage ability. So while Peter relies more on his gadgets and strength, Miles focuses on his Camouflage and Venom attacks, which felt more fluid to me. 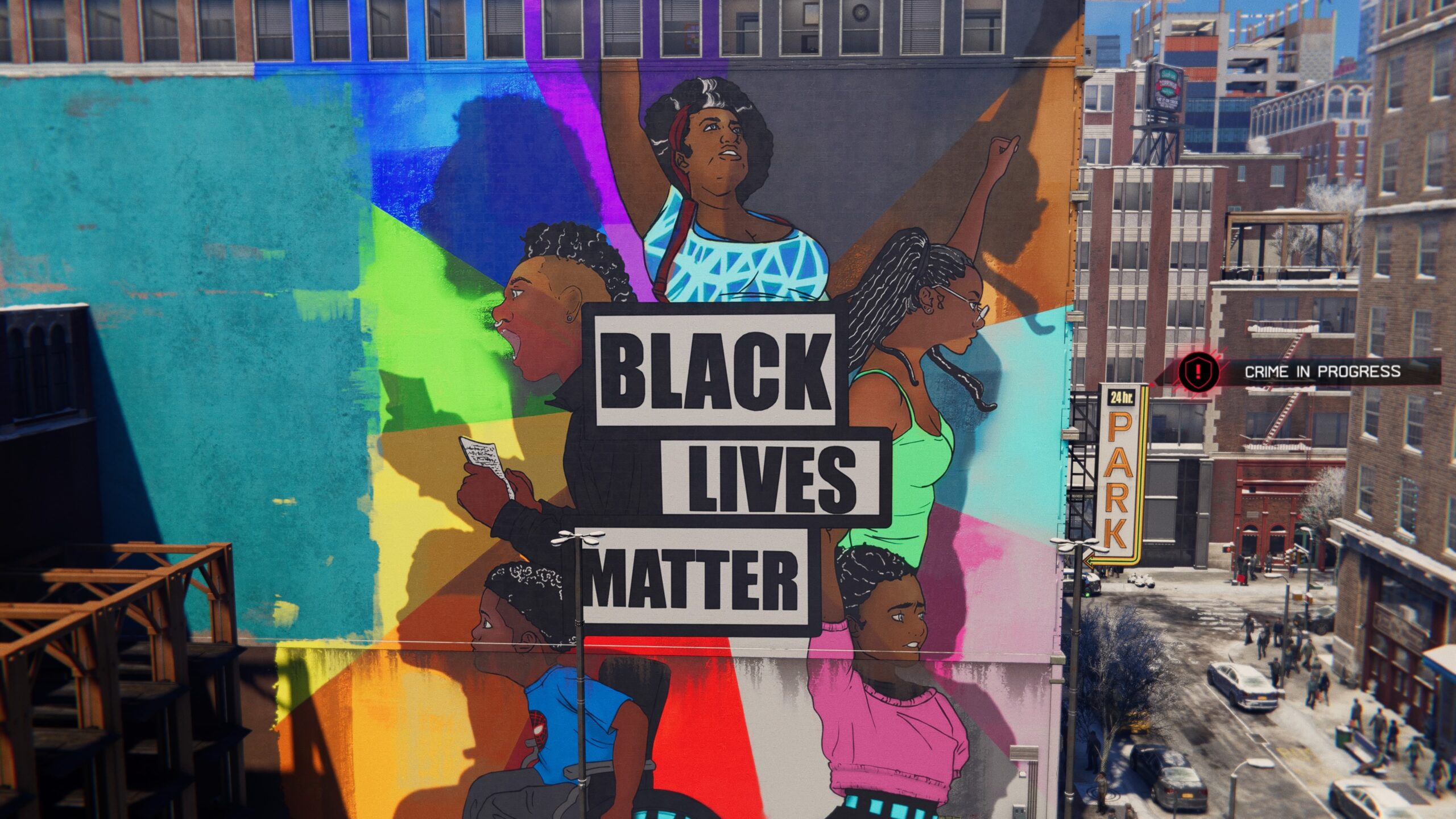 Racism has always existed, but 2020 has been a particularly strenuous year for Black people.

With the deaths of George Floyd, Breonna Taylor and many more at police officers’ hands in the United States, the Black Lives Matter movement has picked up more than ever throughout the year.

While I live in Canada, racism is still very present here, with the police beatings of Dafonte Miller and his recent trial being just one example. Plus, I have many friends and family members in the U.S., so I constantly worry about their safety.

And it’s not only cops killing us. COVID-19 deaths in the U.S. are higher in the Black community than any other race, according to the CDC and APM Research Lab.

In Spider-Man: Miles Morales, I found solace in a game that featured a Black cast that wasn’t worried about dying in these ways. Despite the game not mentioning police brutality or COVID-19, Miles Morales still offered respect to what’s going on in the real-world with a Black Lives Matter mural and a black and gold ‘Pride’ suit.

While I love Demon’s Souls and I’m eagerly waiting for Cyberpunk 2077, Marvel’s Spider-Man: Miles Morales is my game of the year.

Marvel’s Spider-Man: Miles Morales is now available on the PlayStation 4 and PlayStation 5.

For an in-depth look at Miles Morales, check out Brad Shankar’s review.

Port Royale 4 declares independence in its biggest patch to date