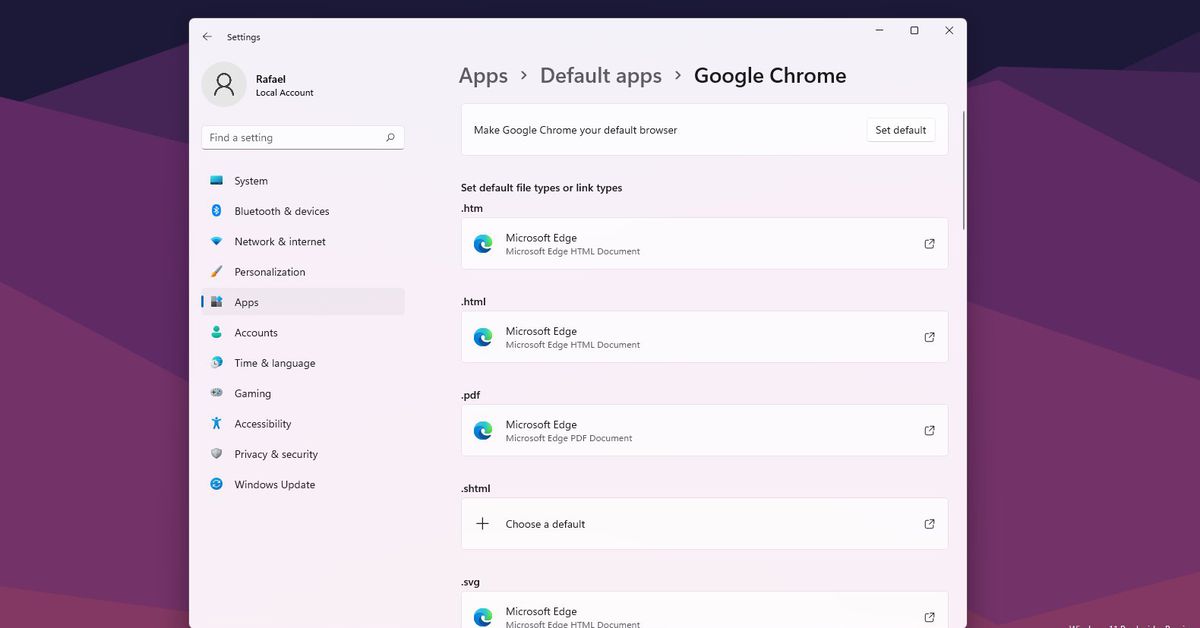 Microsoft is backtracking on changes it made to Windows 11 that made it more difficult to switch default browsers. A new test build of Windows 11 now allows users of Chrome, Firefox, and other browsers to set a default browser with a single button, which is a far simpler process.

Rafael Rivera, developer of the excellent EarTrumpet Windows app, discovered the new Windows 11 changes earlier this week. Instead of having to change individual file extensions or protocol handlers for HTTP, HTTPS, HTML, and HTM, Windows 11 now offers a simple button that lets people switch default browsers in a similar way to Windows 10.

Microsoft has confirmed the changes are intentional and are currently being tested. “In the Windows 11 Insider Preview Build 22509 released to the Dev Channel on Wednesday, we streamlined the ability for a Windows Insider to set the ‘default browser’ to apps that register for HTTP:, HTTPS:, .HTM, and .HTML,” explains Aaron Woodman, vice president of Windows marketing, in a statement to The Verge. “Through the Windows Insider Program you will continue to see us try new things based on customer feedback and testing.”

Microsoft originally defended its decision to make it more difficult to switch defaults, telling The Verge earlier this year that it was “implementing customer feedback to customize and control defaults at a more granular level.” Rival browser makers weren’t happy with the changes, however, and Mozilla, Brave, and even Google’s head of Chrome and Android criticized Microsoft’s approach to default apps.

While Windows 11 does currently offer a prompt when a rival browser has been installed, it’s only triggered when you click a link from outside a browser, try to open an HTML document, or attempt to access browser protocols and files. The prompt lets you open a file or link in a different browser, with a checkbox to always use this program. If you forget to check the box, you’ll have to dig into the settings app in Windows 11 and manually configure a bunch of options.

Microsoft is still testing these new Windows 11 changes that make it easier to switch default apps and browsers, but it’s not clear when they will be available to all users. We’re expecting to see these debut with a larger update to Windows 11 next year, but Microsoft hasn’t announced a release date and some features and updates are appearing ahead of the big annual drop of features.

Still, it’s encouraging to see Microsoft listen to the criticism and feedback around its Windows 11 changes. This u-turn comes amid anger over a new built-in “buy now, pay later” tool in Microsoft Edge, and Microsoft’s efforts to dissuade people from downloading Chrome.

The Internet is Gushing Over This Truly Bonkers Horror Film