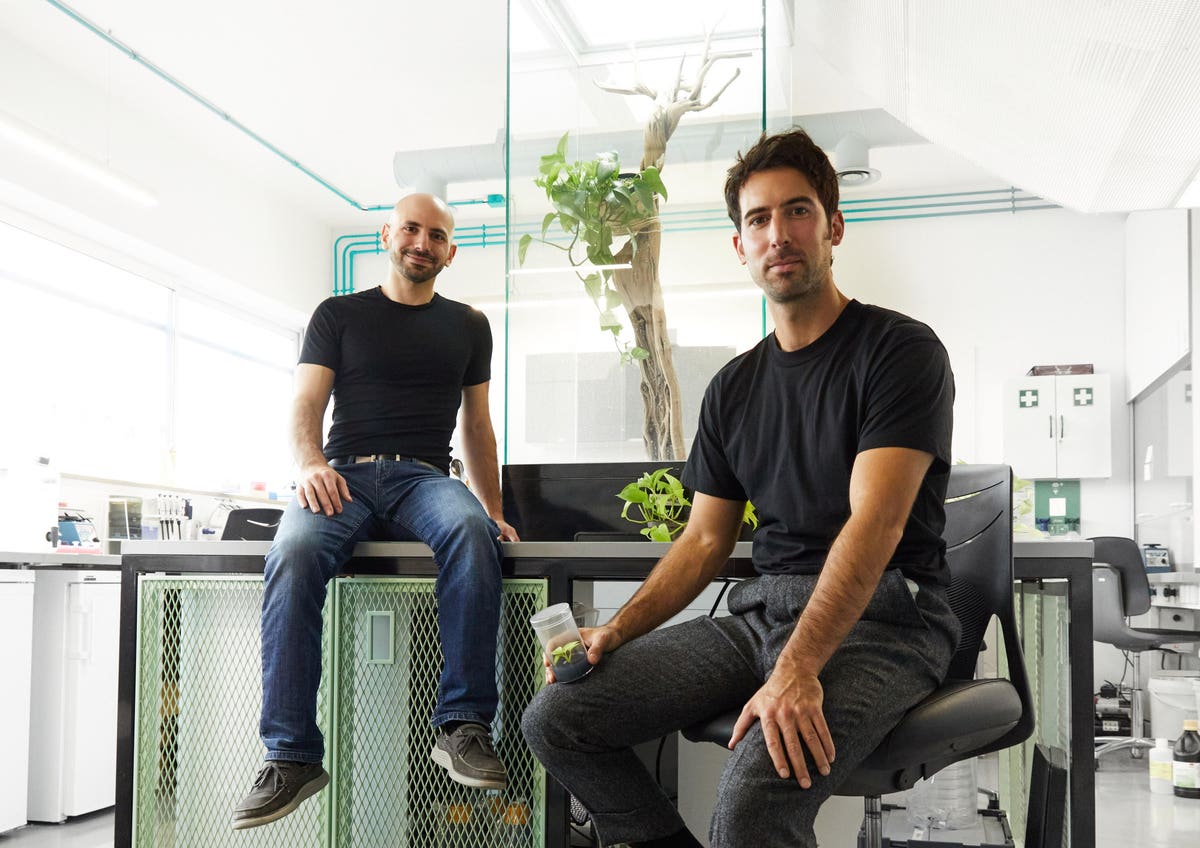 In a lab in Paris, Lionel Mora and Patrick Torbey have been designing a houseplant that can remove pollutants from indoor air, where volatile organic compounds like formaldehyde are a danger to human health. After four years of work, their company, Neoplants, is emerging from stealth Thursday with its first bioengineered houseplant, the Neo P1, which it says can remove 30 times more pollutants than a typical houseplant. Future versions, they believe, could be designed to get rid of even more.

“We call them plants with a purpose,” Mora, the company’s CEO, told Forbes in an interview in New York. “I don’t see anything more important than building a more sustainable future.”

Over the past decade, scores of synthetic biology companies have cropped up with the goal of designing better, more sustainable products thanks to biology, a trend that the Biden Administration’s recent biomanufacturing initiative hopes to accelerate. Meanwhile, the Covid-19 pandemic has made indoor air quality more important for consumers and businesses. Companies like R-Zero, which Forbes profiled in August, are using disinfecting light to clean inside air and have made progress selling their technology to schools and offices.

Since its 2018 founding, Neoplants has raised $20 million in venture funding from firms that include True Ventures and Collaborative Fund, as well as from entrepreneurs Dan Widmaier (Bolt Threads), Emily Leproust (Twist Bioscience), Niklas Zennstrom (Skype) and Arnaud Plas (Prose). The company, which is currently pre-revenue, expects to begin taking orders in early-2023 to ship plants to buyers later next year. It plans to target the U.S. as its first market and to sell to the enterprise market, including real estate developers and hotel owners.

“This is visionary and it’s straightforward. It ticks a box,” says Widmaier, who first met Mora and Torbey at a conference in London before the pandemic. “Plants are interesting because once you get the one that works you are just breeding plants. The nursery down the street does that all the time. I think that’s incredibly elegant and powerful in a world that needs to see new technologies from synthetic biology.”

While the spotlight recently has been on air filtration for Covid, the volatile organic compounds, or VOCs, that Neoplants is targeting—formaldehyde, benzene, toluene and xylene—have long been a huge problem indoors. Formaldehyde, used in manufactured wood and many common household products, can cause burning eyes, coughing, headaches and skin irritation even at low levels. The U.S. Environmental Protection Agency has found that levels of VOCs indoors, where we spend the majority of our time, are generally two to five times what they are outdoors. Neoplants is not targeting viruses, and Torbey says that “mechanical filters will always be better to filter viruses than plants.”

“The most powerful function we could give a houseplant would be to make it clean the air.”

Mora, 32, was born in Austria and grew up in the south of France, where his parents were both schoolteachers. Even as a kid, he had an entrepreneurial streak. As a teenager he sold business cards to hairdressers. After business school at Emlyon Business School in Lyon, France, he worked at Google as a product marketing manager for more than four years. He says he got itchy to do something that had a bigger societal impact. “It’s a typical Millennial syndrome, but I’m fine with it,” he says.

Torbey, 33, grew up on the outskirts of Beirut, Lebanon, where his dad was a pediatrician and his mom was a schoolteacher. He received his Ph.D. in genome editing from Ecole Normale Superieure in Paris. “When I was doing my Ph.D., I gave courses in how to create your dragon. How can you use these genetic tools to create something magical?” he says.

Despite their different backgrounds, they clicked when they met at the Station F startup incubator in Paris. Soon, Torbey broached the idea of building an organism that had a function. “We’re surrounded by beautiful houseplants, and we thought, ‘Well, this is a very simple iconic organism,’” says Mora, noting that 80% of households already have plants in their homes. “The most powerful function we could give it would be to make it clean the air.”

In 2018, they launched Neoplants. They settled on the pothos plant, commonly called Devil’s Ivy, a basic houseplant that’s extremely hardy and does well in a range of environments. Its big waxy leaves and high growth rate allow it to absorb a lot of pollutants. Those are big advantages for creating a commercial product. But they also faced a disadvantage. There wasn’t any significant research on the pothos. Another drawback: Ingesting pothos is poisonous, making it a bad option for those with pets. “We work on plants that no one has studied before,” Mora says. “This is one of the things that was probably the biggest challenge. You’re starting in the dark.”

In Neoplants’ lab, Torbey and his team sequenced the genome of the pothos and then developed dozens of prototype plants that refined the capabilities of the one found in nature. They enhanced the plant by engineering its molecular metabolism, allowing it to convert VOCs into plant matter rather than storing them as pollutants. They also worked on the plant’s microbiome, essentially supercharging the community of beneficial fungi and bacteria that live within the plant in order to more efficiently metabolize these VOCs. They also customized the soil of the new plant using biochar, a charcoal-like substance, to improve its efficiency in getting rid of pollutants. The process of modifying a plant like this is both conceptually straightforward and technically difficult.

During the interview, Mora pulls a small plant out of his bag that’s in an enclosed container. It looks like a common houseplant, similar to a philodendron. “This one is a golden pothos,” he says. “It’s very cute and very beautiful.”

The actual plants will be far larger once they’re ready for sale. The Neo P1 sits on a custom-designed tall stand that both maximizes its air-cleaning properties and allows it to be watered far less often. Initial testing, conducted in partnership with Ecole Mines-Telecom of Lille University, showed the new plant was up to 30 times more effective at removing VOCs from the air than the most efficient plants found in nature. “Our first product is equivalent to 30 regular houseplants,” Mora says. “We’re very proud of that.”

Though based in Paris, Neoplants has set up a U.S. company, and Mora says he’s now finalizing a deal with a major houseplant grower in Florida to turn the lab-researched plants into a commercial product. The new plant, which needs to receive approval from the U.S. Department of Agriculture under its regulations for genetically modified ornamental plants, will sell for $179, including the self-watering stand and three months of drops to enhance the microbiome.

“Plants are interesting because once you get the one that works you are just breeding plants.”

After that, Mora figures on regularly launching new products and adding new features to its existing plants. To do future research, the company is currently building an advanced 12,000-square-foot research lab in the Paris suburb of Saint-Ouen-Sur-Seine that’s expected to open in November..

How much more efficient could their bioengineered plant ultimately be remains an open question. “I don’t want to feel stupid in 10 years,” Torbey says. “I really don’t know what’s the limit. Technology when it comes to plants is so much in its infancy.”

Over the long term, the duo hope to develop bioengineered plants that can fight climate change outdoors through carbon capture, a far more complex undertaking than designing houseplants. The technology they’ve developed might also be usable for soil decontamination, Mora says. As he says: “Our strategy is to start working on a use case where we can release a product to market as fast as possible, and allow us to move into carbon capture with scientific credibility.”

Denial of responsibility! TechCodex is an automatic aggregator of the all world’s media. In each content, the hyperlink to the primary source is specified. All trademarks belong to their rightful owners, all materials to their authors. If you are the owner of the content and do not want us to publish your materials, please contact us by email – [email protected]. The content will be deleted within 24 hours.
air filtrationeuropean startupsindoor air pollutionlionel moraNeoplantsPatrick Torbeypollution-killing plantssustainability
0
Share