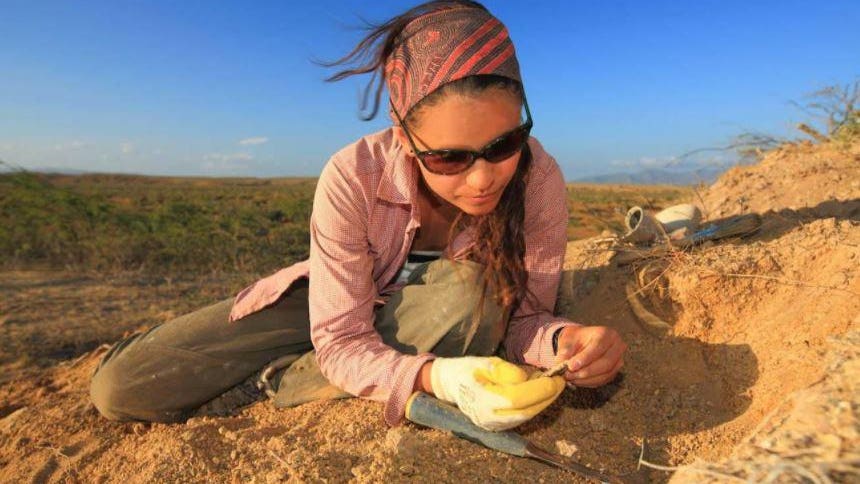 Camila Martinez, one of Colombia’s few paleobotanists, studies plants fossils from an ancient era of Earth’s history— which can also teach us about what could happen to Earth’s biosphere as carbon levels rise in the atmosphere.

Martinez, now a professor at EAFIT University in Medellin, Colombia, says she had the option to study plant fossil from North America or Patagonia, but studying her own country had a special meaning.

“I thought that if I didn’t study them, no one else will and they will end up forgotten in boxes,” she says, “In the end they trusted me and today I can tell the story these fossils were hiding: the earliest record of a tropical dry forest in South America.”

Martinez says  couple months before she began her PhD, she had the opportunity to participate in a paleontological salvage project during the construction of a dam, in Santander, Colombia.

“I was lucky because one of the major findings of this project was a beautiful fossil flora from the Eocene,” she says, “The age and the quality of the fossils immediately called my attention because the Eocene is a geologic epoch characterized by dramatic climate changes and atmospheric carbon dioxide concentrations like those that we expect in the upcoming centuries if we keep releasing carbon emissions at the same rates we do today.”

Martinez says fossils plants are key because they can be used to estimate what the climate and carbon dioxide concentrations were millions of years ago.

“You can also reconstruct these past ecosystems and get ideas about those lineages that are already pre-adapted to the climatic conditions we are expecting in the near future,” she says.

Tropical Past, Present and Future

Martinez says tropical South America is the most biodiverse region on Earth.

“If we don’t study this region, we are missing most of the story about life on Earth, its history and evolution,” she says, “The biodiversity and climate change problems that the world is facing right now cannot be addressed without integrating knowledge from all regions.”

History has shown over and over, Martinez says, expeditions from outsiders can only bring to the surface a small part of all that is already know and yet to be discovered.

“We must learn to investigate through collaborative networks between international, national, and local institutions and people, to materialize knowledge and discovery into problem solving,” Martinez says, “As one of the few paleobotanists from Colombia, I feel that I can use what I have learned abroad and integrate it with years of fieldwork experiences to create projects that bridge the knowledge of immense past of tropical regions, climate change, biodiversity and the importance of science to the non-academic audience and policy makers.”

Office in the Forest

Martinez was born in Bogota, Colombia and says her interest in Biology came only when she was about to graduate from high school.

In 2009, she finished her undergraduate biology degree at the Universidad de los Andes in Bogota and then in 2011, a master’s degree at the same institution.

“Throughout those years I also had the opportunity to participate in different research projects at the Smithsonian Tropical Research Institute in Panama and that inspired me even more to pursue an academic career,” she says, adding that she would go in to do her PhD in Plant Biology at Cornell University.

“Looking back to my first thought of what being a biologist mean, I think I wasn’t wrong: I have had many temporary offices in the middle of forests and deserts too, and I had traveled a lot, but I wish we have had more opportunities to know about careers that are less known and definitely, examples of women pursuing them,” she says.

Another paleobotanist from the Global South is South Africa’s Aviwe Matiwane who is cataloging fossils of a plant that can provide us with a glimpse back in time to the climate and even food chains of a time before the dinosaurs.

Matiwane, says Glossopteris was an early example of a gymnosperm, that is, a plant that uses an exposed seed to reproduce, rather than a fruit.

Denial of responsibility! TechCodex is an automatic aggregator of the all world’s media. In each content, the hyperlink to the primary source is specified. All trademarks belong to their rightful owners, all materials to their authors. If you are the owner of the content and do not want us to publish your materials, please contact us by email – [email protected]. The content will be deleted within 24 hours.
Aviwe MatiwaneBotanyCamila MartinezColombiaEAFIT UniversityEarth SciencesFossilPaleobotany
0
Share

Clerk Trailer Follows the Life and Career of Kevin…

A big leap forward in using iron catalysts for…