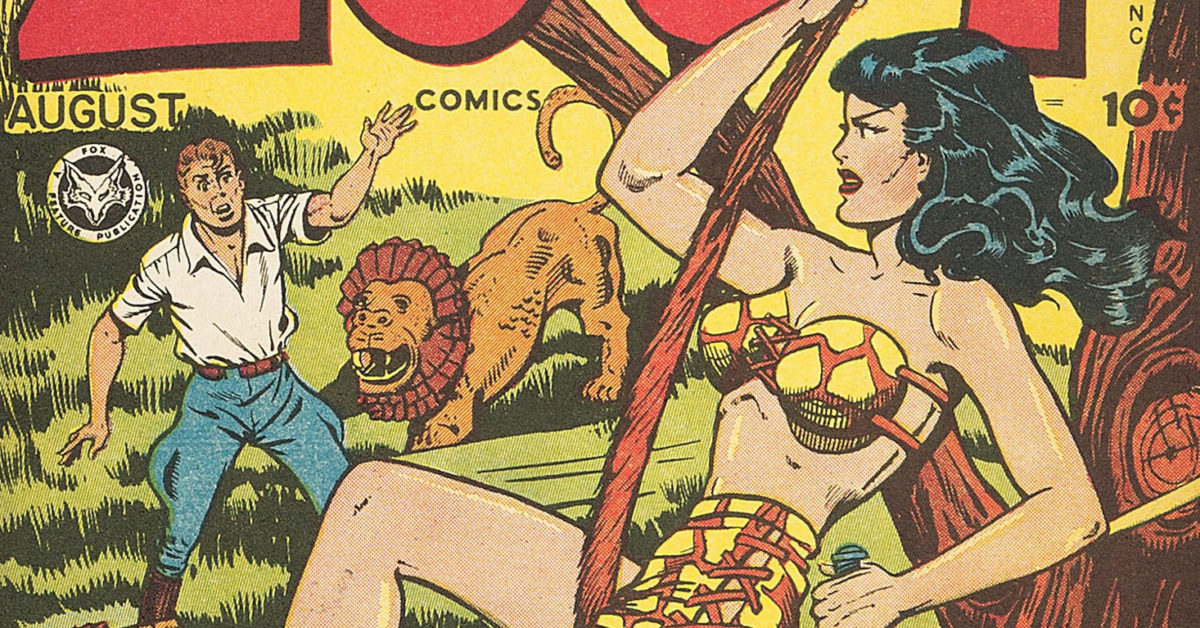 One of the most important comic book artists of the Golden Age, Matt Baker is best remembered for his “Good Girl” style artwork on numerous Fox Feature Syndicate titles, and for his beautiful work on St. John Publications romance titles.  Perhaps most well known for his work on Fox’s Phantom Lady and St. John’s It Rhymes with Lust, Baker was a prolific artist throughout the late 1940s through the early 1950s.  Fox Feature Syndicate’s Zoot Comics contains another good example of Baker’s work in the era on the character Rulah, Jungle Goddess.  Matt Baker’s work has been highly sought after for decades, and there’s an excellent example in Zoot Comics #8 (Fox Features Syndicate, 1947) Condition: VG- up for auction in the 2022 June 26-27 Sunday & Monday Comic Books Select Auction #122226 at Heritage Auctions.

Rulah first appeared in Fox’s Zoot Comics #7 in 1947, her creation is generally credited to Baker.  Her name was originally given as Jane Dodge, an adventurous pilot who crash-landed her airplane in the African jungle.  Making her way to a nearby village, she outwits the machination of a rival village and is proclaimed a goddess.  Ultimately, she is forced to defeat a leopard with her steel knife and is given the name Rulah by the villagers.  Zoot Comics was renamed Rulah, Jungle Goddess by issue #17, and the character also appeared in All Top Comics.

The character was made memorable by artistic contributions from Baker, Kamen and others, her second appearance by Baker in Zoot Comics #8 is an excellent example of the series, and there’s aZoot Comics #8 (Fox Features Syndicate, 1947) Condition: VG- up for auction in the 2022 June 26-27 Sunday & Monday Comic Books Select Auction #122226 at Heritage Auctions.   If you’ve never bid at Heritage Auctions before, you can get further information, you can check out their FAQ on the bidding process and related matters.

Most people hide minor purchases from partner, and…