For months now rumors have been swirling that a Mass Effect Trilogy remaster or “HD remake” (the original games were already HD, but you get the point) is in the works, but EA has yet to announce anything. Many expected the title to be announced at the EA Play Live event back in June, but obviously, that didn’t happen. Back in August reliable insider Jeff Grubb hinted at an October release for the Mass Effect Trilogy revival, but warned it wasn’t set in stone…

I know the plan for sure was to announce [Mass Effect Trilogy] in early October, release it later in October. So, good news. Maybe bad news, it’s 2020 and maybe that could start to slip. Nothing for sure yet. It’s real, I know it’s real. I’ve seen more than enough evidence to know it’s real, but it’s still 2020 and they haven’t announced it yet. EA’s never said anything about this, BioWare’s never said anything about this, so if it does slip I give you permission to be mad at me.

Well, we may have fresh evidence that Mass Effect Trilogy is indeed coming our way soon. Portuguese retailer Gaming Replay recently listed Mass Effect Trilogy Remastered for Xbox One, PS4…and Nintendo Switch. Jeff Grubb previously hinted a Switch version was in the works, but might not be available at launch. Perhaps that’s changed. The Gaming Replay listings have been removed, but, of course, the Internet never forgets (thanks to the folks at Video Games Chronicle for the screencap). 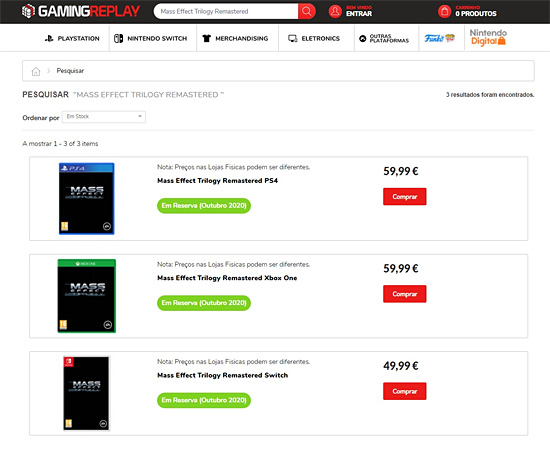 Of course, take this all with a grain of salt for now, but the source of previous Mass Effect Trilogy Remastered rumors have been reliable, and these kind of retail leaks turn out to be the real deal surprisingly often.

If Mass Effect Trilogy Remastered does end up coming out this year, will you be picking it up? Or are you more interested in new RPGs like, say, Cyberpunk 2077?