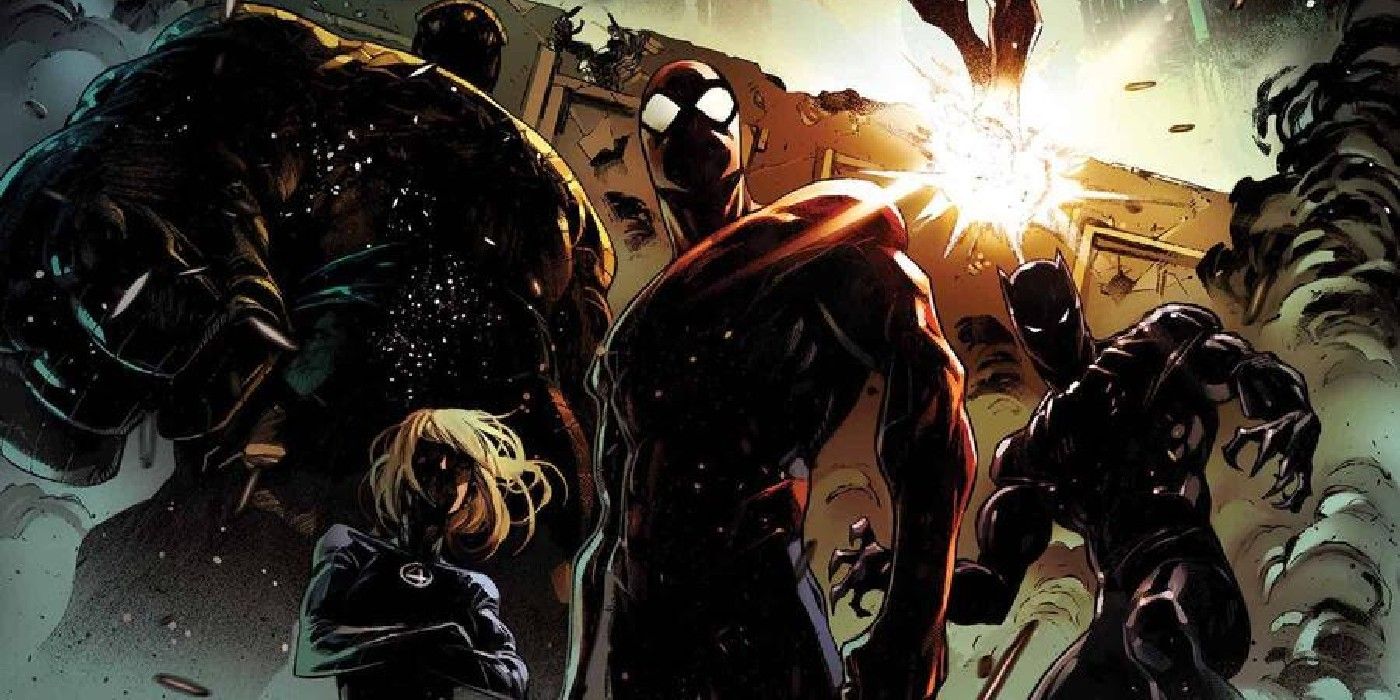 Marvel Comics is teasing promotional art by Ryan Stegman for their Dark Ages event beginning in September 2021, previously delayed due to COVID-19.

Marvel’s Twitter has alerted people that the long-delayed “Dark Ages” event will be happening this year. Marvel Comics‘ previously teased this event in Free Comic Book Day’s X-Men #1 but it was delayed by COVID-19. The out-of-continuity story was originally scheduled to come out in Fall 2020 but will now begin in September 2021.

The “Dark Ages” event is written by Tom Taylor, the writer of DC’s Injustice: Gods Among Us and Marvel’s All-New Wolverine. He’s joined by artist Iban Coello, who has worked on Marvel titles such as Venom and Deadpool & The Mercs for Money as well as DC titles like Justice League Beyond 2.0. The color artist is Brian Reber, a colorist for Marvel’s X-Men Legacy and Spider-Man/Deadpool. The preview for the Dark Ages event in FCBD’s X-Men #1 revealed that, at least in New York City, Marvel’s heroes have been left without electricity. This is especially bad news for Tony Stark aka Iron Man, who is hundreds of miles up in the sky investigating a mysterious tremor when the event happens, meaning he’s left falling high and blind in his suit. The excerpt ends with the narration “Before everything stopped. Before the lights went out . . . forever.”

A three-tweet long thread was released by Marvel Entertainment teasing the long-delayed “Dark Ages” event. The three tweets featured artwork by comic book artist Ryan Stegman, who’s previously illustrated Marvel’s Venom. He’s back to form with the promotional images kicking off with an image of Spider-Man in an altered suit. The costume in question looks a bit bulkier with some belts seeming to keep pieces of it put together.

The second image features Iron Man, who readers of FCBD’s X-Men #1 already know will be hit hard by this event. It doesn’t help that Tony is essentially the Robocop of the Marvel Universe. This ties in with the quote on the promotional images, “Who were you when the lights went out?” This seems to say that in this “Dark Age,” the way some characters go about their daily lives, whether it be saving people or getting their daily dose of cat memes, will be changing, for better or worse, ultimately changing them at their core as a person. But amidst all the talking of what this event could mean is also speculation of who the third and final character appearing in these tweets is. He looks to be a combination of Carnage and Venom, though some users make jokes that he looks like a venomized Spawn or Nightwatch.

Since this is an out-of-continuity event, it leaves plenty of room for Taylor and Coello to play with the world they’ve been given. Considering Taylor is responsible for writing the best-selling Injustice comics, there is a lot of hype that this story will be well worth the wait. At this point, readers are still being left mostly in the dark about this event, but hopefully “Dark Ages” will remain on schedule and step out into the light come September 2021.

Nicole D’Andria works as a freelance writer/editor specializing in comics. She adapted Miraculous: Tales of Ladybug & Cat Noir to comics and writes her own ongoing comic book series, Road Trip to Hell. Nicole works as a freelance comic editor for Tapas Media and Scout Comics. She also serves as an Associate Editor for the scholarly journal Clio’s Psyche. She writes a series of interviews showcasing Kickstarter creators for Comic Frontline. Previously, she worked as Action Lab Entertainment’s Submissions Editor and Marketing Director. Find out more about her on the website, http://comicmaven.com.

Denial of responsibility! TechCodex is an automatic aggregator of the all world’s media. In each content, the hyperlink to the primary source is specified. All trademarks belong to their rightful owners, all materials to their authors. If you are the owner of the content and do not want us to publish your materials, please contact us by email – admi[email protected]. The content will be deleted within 24 hours.