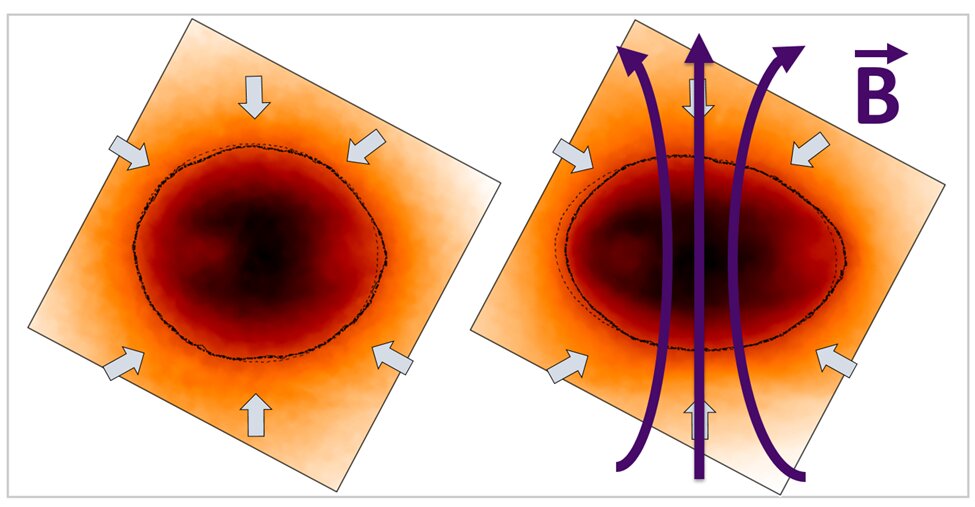 Nuclear fusion is a widely studied process through which atomic nuclei of a low atomic number fuse together to form a heavier nucleus, while releasing a large amount of energy. Nuclear fusion reactions can be produced using a method known as inertial confinement fusion, which entails the use of powerful lasers to implode a fuel capsule and produce plasma.

Researchers at Massachusetts Institute of Technology (MIT), University of Delaware, University of Rochester, the Lawrence Livermore National Laboratory, Imperial College London, and University of Rome La Sapienza have recently showed what happens to this implosion when one applies a strong magnetic field to the fuel capsule used for inertial confinement fusion. Their paper, published in Physical Review Letters, demonstrates that strong magnetic fields flatten the shape of inertial fusion implosions.

“In inertial confinement fusion, a millimeter-size spherical capsule is imploded using high-power lasers for nuclear fusion,” Arijit Bose, one of the researchers who carried out the study, told Phys.org. “Applying a magnetic field to the implosions can strap the charged plasma particles to the B-field and improve their chances of fusion. However, since magnetic field can restrict plasma particle motion only in the direction across the field lines and not in the direction along the applied field lines, this can introduce differences between the two directions that affect the implosion shape.”

Over the past decade, several physicists investigated the possible effects of magnetizing fusion implosions. Most of their studies, however, were numerical in nature and did not test hypotheses in an experimental setting.

Bose and his colleagues thus decided to conduct a series of tests to empirically determine what happens to the shape of inertial fusion implosions under a strong magnetization. Their experiments were specifically designed to explore the properties of strongly magnetized plasmas, by producing unique plasma conditions. In these conditions, the plasma ions and electrons are both magnetized.

“It is worth noting that the magnetization of plasma ions is very difficult to attain and has not been studied at high power lasers,” Bose explained. “To conduct our tests, we used an extremely high 50T magnetic field, much higher than the ones used in previous experiments, and used shocks to drive the implosion experiments at the OMEGA laser facility. We found, for the first time, that this field flattened the shape of the implosion, such that it became more oblate.”

The researchers carried out their experiments at the OMEGA laser facility, located at the Laboratory for Laser Energetics in Rochester, New York. Specifically, they applied high B-fields (i.e., with strengths 1000 times higher than those of typical bar magnets), to a millimeter-size spherical capsule, which was heated to over 100 million K using a laser-driven shock.

“The shock heating and applied B-field produced unique plasma conditions with strongly magnetized electrons and ions which were important for the experiments,” Bose said. “Through simulations, we then determined that this oblate shape is caused by the suppression of heat flow (perpendicular to the direction of the magnetic field) in the strongly magnetized plasma.”

The recent work by this team of researchers provides new valuable insight about inertial fusion implosions and the effects that magnetic fields can have on them. In the future, the method they outlined could be used by other teams to produce strongly magnetized electrons and ions in experimental settings, using high-powered lasers.

“Most notably, we were the first to observe that the applied magnetic field flattened the implosion shape,” Bose added. “In our next studies, we plan to use the ‘recipe’ outlined in our paper to conduct more experiments aimed at producing strongly magnetized electrons and ions to investigate the effect of magnetization on transport properties.”

Annapurna Interactive to host a games showcase next month