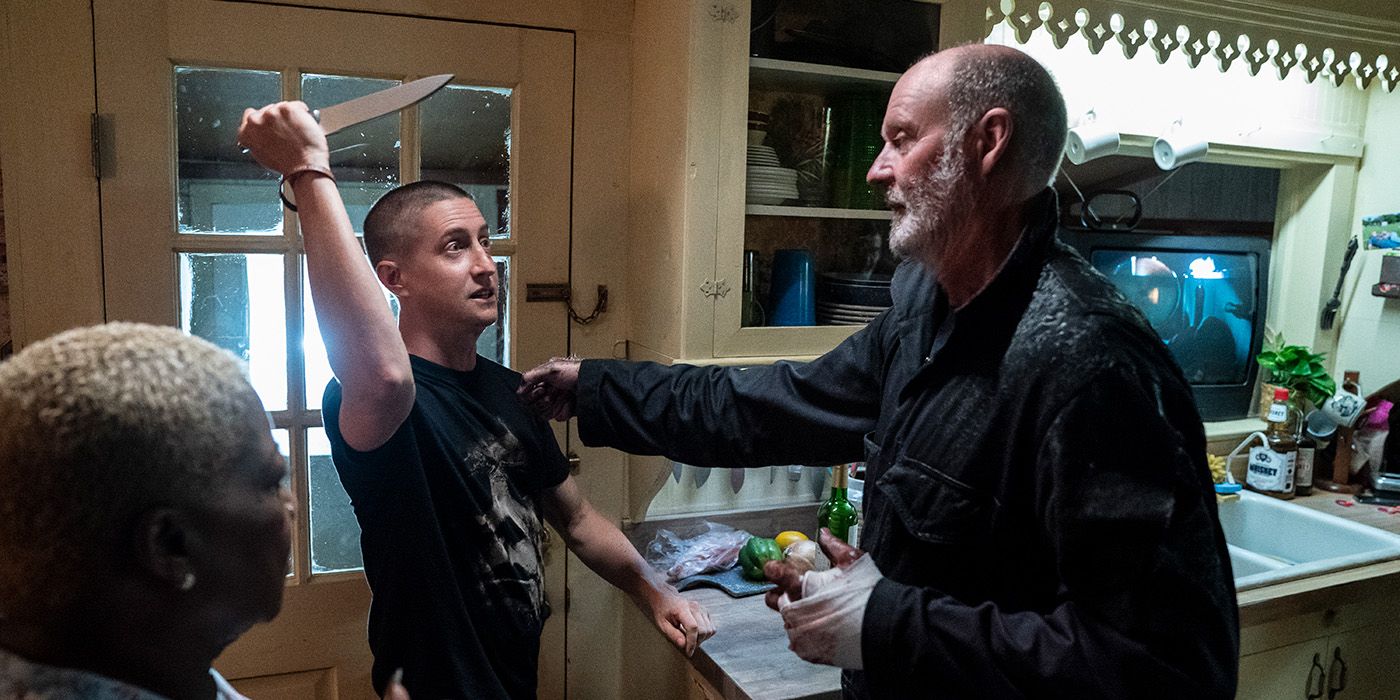 The wait is finally over for terror to return to Haddonfield, Illinois with Halloween Kills as Michael Myers escapes the trap set by Laurie Strode in the 2018 reboot and continues his murderous rampage. Returning for the ride is Jamie Lee Curtis, Andi Matichak, Judy Greer, James Jude Courtney, Will Patton, Omar Dursey, Dylan Arnold, Charles Cyphers, Kyle Richards, and Nancy Stephens.

To celebrate the release of the new chapter, Screen Rant took part in a press roundtable interview with Halloween Kills co-writer/director David Gordon Green and producer Jason Blum to discuss the film’s social relevance and bloodier action in comparison to the 2018 film.

I know many fans including myself are very excited to see people like Kyle Richards and more OGs return, but did anyone need any convincing? And how you feel about fans clamoring for people like Josh Hartnett and Danielle Harris to maybe pop up in the next one somehow?

David Gordon Green: Strangely, it didn’t, nobody needed convincing. It was a funny request to reach out to folks and I don’t know that it was expected. Charles Cyphers has been retired for years and to be able to convince him to come back and reprise a role that he created so many years ago was exciting.

And with Kyle Richards, it’s just so fun to think that she was seven or eight years old when she was in the original film and here she is playing that role and slipping into an echo of the Laurie Strode character. We don’t have any big intentions for any sort of clever callback characters in Halloween Ends, but you never know, sometimes my nostalgia gets the best of me so we’ll see.

This film has a bit of a theme about misinformation and the way mob mentality sort of negatively impacts a community. I was wondering if that was the game plan for you guys, way back when you designed this trilogy or was it something that came to mind through current events or through media and the news?

David Gordon Green: Well, we filmed it two years ago, so it’s interesting to think about it with that perspective. It was when we were finishing the film and headlines of similar subjects were starting to happen that we felt, “Oh, this is really relevant.”

Then COVID happened and puts us on the shelf for a year and now in a strange way, with the public consciousness and the awareness and the conversations that people are having, I feel like in a strange way we’ve taken a genre slasher movie and felt like it’s landed in a time of some sort of cultural relevance that is coincidental but is fascinating as a filmmaker to be a part of those dialogues.

A lot of people talking about the movie are having a blast in just how violent it is and it feels like the kills have really been ramped up to 11 and people are even calling back to the violence of Rob Zombie’s films. I was curious, can we talk about upping the ante, David, and if perhaps you felt that you weren’t going far enough or you were starting to push the limits? Because it really does get gnarly.

David Gordon Green: It’s also very subjective, in entering the film and in the script phase, we had no intentions of making a graphically violent movie. It was certainly ambitious and aggressive from a physical and stunt logistical level, but it wasn’t until we were filming the sequences and figuring out where to place the camera and seeing how effective some of the makeup and killing effects were that we were so fortunate to work with a great makeup and effects artist like Chris Nelson.

When we’re in the editing room, and we’re navigating where the subtlety might live, all of a sudden the editor Tim Alverson and I just kind of threw up our hands and said, “Subtlety is not this film. Perhaps it will return but it is not in a movie called Halloween Kills. So let’s just have fun with it. Let’s give the audience something to scream at and eat popcorn too and have a good time at the movies.”

So often in slasher franchises we move on from movie to movie and kills to kills and we don’t really deal with the aftermath very often, especially from an emotional perspective. I was wondering if you could talk about addressing that in this film.

David Gordon Green: I do feel like I’m drawn as a writer and director to making sure that there’s an emotional core to these characters and as abstract and chaotic as some of the violence might get and grotesque as it gets, oftentimes acknowledging that within the reality of these characters. I think moments where we acknowledge what the reality of the trauma is, and as Jamie so eloquently can speak to the survivors of these events, making sure there’s moments that we really feel the humanity underneath the surface of this movie monster.

Halloween has been around for about 40 years or so, and so when dealing with this trilogy, what were the elements that you really wanted to create that separated not so much Halloween from the other movies, but kind of modernized it, and what were the things that were really essential that you still wanted to keep?

David Gordon Green: Well, I think there’s the essential DNA of three things: Michael Myers, Laurie Strode, and the theme, the score from John Carpenter. So having those three elements, now we can have our creative muses, we can take our inspirations, we can travel wherever we want with a narrative, because our mythology is in place with those three creative elements. So to me it’s just a wonderful playground to be able to take legacy characters from Carpenter’s 78 film, some of the new characters that we created in our 2018 movie and take them on an explosive journey through Haddonfield.

I’m curious, as far as the writing aspect, how does one look at something like John Carpenter’s classic film and create a new path after all these other films have been made to take us on a journey to where we’re ultimately going to get a satisfying conclusion to Laurie’s peril?

David Gordon Green: Well once you get over the intimidation of it, because those are some heavy shoes to fill, and realize that we have the support of a great team from Jason and our friends at Blumhouse and all of our technicians that surround us, it’s basically Danny McBride and I and a new writing collaborator on each of the three chapters of our trilogy from Jeff Fradley, Scott Teems, Chris Bernier, and Paul Logan.

We really workshopped the scripts and we talked about the creative opportunities and the obstacles, you can always write yourself into a corner and then you need someone to look to and say, “Okay, now how do we get out?” Whether it’s Michael being trapped in the basement or Laurie being stabbed in the gut, these are dramatic tools that we’ve reached in to utilize for our narratives and then we have to find solutions to evolve the story of all these characters and make these characters, that are so iconic at this point, mythological characters that we as viewers, as fans, as an audience, want to return to.

A term used in the franchise is pure evil, so for Halloween Kills, what is pure evil according to your direction?

So Michael is the essence of pure evil, Laurie is the essence of pure good and then Halloween Kills is a movie that explores the blurry line. What happens when the community starts to misunderstand, misrepresent, confuse what is good, what is evil? It’s nice to have the extremes defining good and evil and this movie is about that, that confusion and chaos.

Next: Halloween Ends Theory: The Perfect Setting For The Final Chapter

California’s Activision Blizzard Lawsuit Is Being Accused Of Ethics Violations

Motorola has not one but two interesting Moto G…