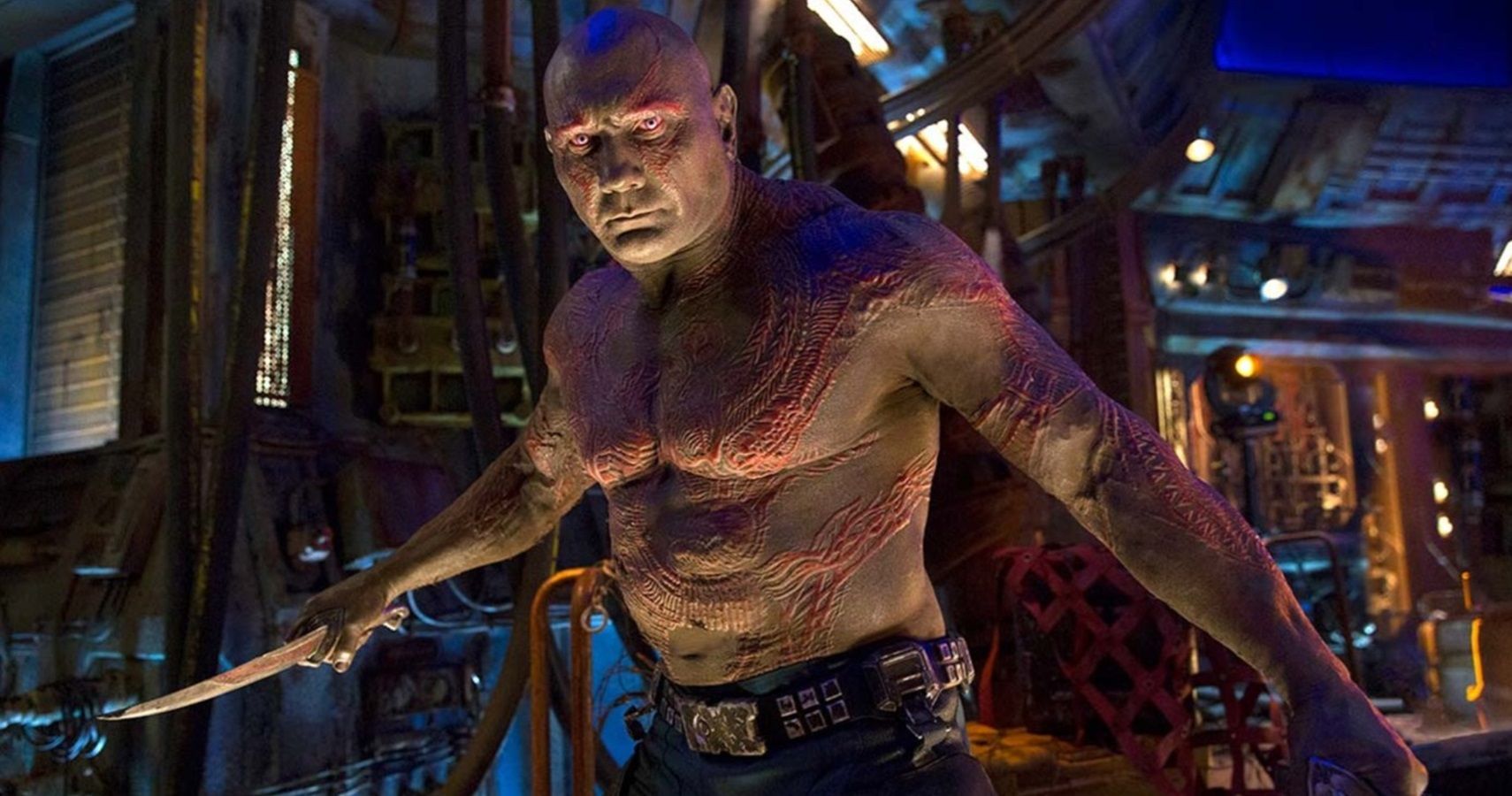 Director James Gunn reveals that he would love to write an R-rated solo movie about Guardians of the Galaxy character, Drax the Destroyer.

In the first Guardians of the Galaxy movie, Drax is a powerful ex-mercenary hellbent on seeking revenge after his home planet of Kylos was attacked by Thanos. Ronan the Accuser, the primary villain of the film, led Thanos’ armies to Kylos and murdered half of the Kylosian population, including Drax’s wife and daughter. He becomes an ally to Star-Lord and the other guardians, and eventually softens up his tough-guy exterior to the rest of the team. Drax is a fan-favorite character within the MCU, largely due to his hyper-literal nature and dry humor. His next appearance will be in the highly anticipated Phase 4 team-up film, Thor: Love and Thunder. But unfortunately, Dave Bautista announced that he would not be coming back to the MCU after Guardians of the Galaxy: Volume 3, which is slated to release in May 2023.

In an interview with The Direct, Gunn told reporters that he would love to make an R-rated Drax solo movie. His take on the character would feature a more unhinged “barbarian Drax,” and would certainly be a first for the MCU, as the franchise doesn’t have any R-rated outings as of yet. Gunn’s full quote can be read below:

“I could go off and make a Drax movie that’s R-rated, that I would love to do, like barbarian Drax. But the ‘Guardians’ movies are fables, and I don’t think of them like that. I don’t write them like that. It’s a different type of movie, and you can have some gore and some scary darkness in there and things like that, which is good, but it’s not the rock and roll of ‘Suicide Squad.’”

Gunn is certainly no stranger to a darker, raunchy side of filmmaking, and it would be interesting to see how he could apply some explicit themes to the MCU. His work on previous projects like 2019’s Brightburn and 2004’s Dawn of the Dead prove that Gunn isn’t afraid to dip into R-rated territory. His upcoming DCEU movie, The Suicide Squad, earned an R-rating by the MPA due to its depictions of gore, violence, and yes—full-frontal nudity. Margot Robbie (Harley Quinn), Idris Elba (Bloodsport), John Cena (Peacemaker), and others star as the notorious anti-heroes, working side-by-side under the name Task Force X. The film follows the squad after they are ordered to infiltrate Jotunheim, a Nazi-era prison where the extra-terrestrial Starro the Conqueror is being held in a laboratory.

Whether it’s a DCEU or a MCU project, Gunn’s work is famous for its witty back-and-forth dialogue, dark humor, and some truly great characters. While not much is known about the upcoming Guardians of the Galaxy installment, it will be Bautista’s (and likely Gunn’s) last collaboration with Marvel Studios, meaning audiences are bound to get some top-notch Drax moments before his departure. While its unknown if the character of Drax will be recast for future projects after Bautista’s exit, one thing’s for sure: an R-rated Drax solo film written by Gunn would be an epic addition to the MCU.

More: Every Marvel Hero Joining Guardians Of The Galaxy

Amanda is a news writer for the Movie/TV team at Screen Rant. A Chicago resident, she’s a lover of all things pop culture. Some of her favorites include Star Wars, the MCU, and anything Wes Anderson. She recently graduated from Roosevelt University with a degree in Journalism & Media Studies. Amanda found a passion for film journalism after working as the Arts & Culture Editor for her school newspaper, the Torch, where she attended film premieres and wrote reviews. At Screen Rant, Amanda continues to do what she thinks she’s best at: screaming about movies and TV shows.

You’ve heard of Live Caption, but the Pixel 6 is getting Live Translate too

Razer gets its opto-mechanical keyboard right on…

Cows Can Be Toilet Trained, A New Study Suggests.…