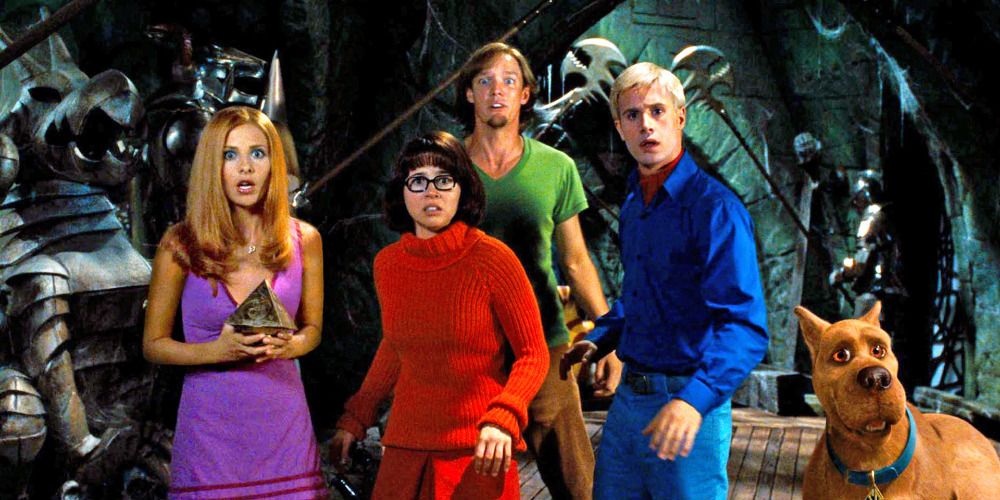 James Gunn is one of the most popular directors working today. With critical hits like Guardians of the Galaxy and The Suicide Squad, Gunn has quickly won over the hearts of comic book fans everywhere with his unique blend of humor and character-driven storytelling. However, before he hit super stardom, he was best known as the screenwriter for the 2002 and 2004 live-action Scooby-Doo movies. In recent years Gunn has been open about his time working on this iconic property and what a third film would have looked like. Now Gunn thinks Warner Brothers would be behind a rated-R Scooby-Doo 3 if he asked to do it.

Gunn recently responded to a fan on Twitter who was asking about what would have to happen for a third film to get made. The fan shared an interview that Matthew Lillard aka Shaggy did with Toofab where the actor expressed interest in a R-rated reboot with the original cast. Freddie Prinze Jr. who played Mystery Inc. leader Fred wasn’t very optimistic, responding, “Rightly or wrongly they don’t have the guts to make that movie”. This is where Gunn chimed in saying, “I think they’d do it if we asked. I just don’t think I have the time right now!”

Reboots are all the rage these days. Whether it’s Ghostbusters, Star Wars, or The Munsters it feels like every major franchise under the sun is trying to make the most out of this nostalgia driven era. Because of that, the live-action Scooby-Doo duology is prime for the reboot treatment. The first Scooby-Doo film, which just celebrated its 20th anniversary, was one of the most underrated gems to come out of the 2000s. It was a film that was clearly altered from its more adult oriented version that Gunn originally had, but that didn’t stop it from defining the franchise for a new generation. It didn’t matter that the film was panned by critics at the time, this was an experience that was truly ahead of its time. Whether it was the pitch perfect casting, the brilliant soundtrack, or Gunn’s zany wit, the 2002 film was a love letter to Scooby-Doo while also being a clever parody of the franchise as a whole. Even though it wasn’t rated-R or even PG-13, the film got away with a lot, and it would have definitely not been PG today.

RELATED: The Scooby-Doo Movies We Didn’t Get: Jim Carrey as Shaggy, Isla Fisher as Daphne and More

The film was successful enough to get an equally fun sequel Scooby-Doo 2: Monsters Unleashed in 2004, but that sequel never did well enough for a third film to happen. However, the foundations are here for an experimental rated-R reboot. Especially if you’d seen Scooby-Doo’s deleted scenes and Gunn has proven his brilliant adult sensibilities in both The Suicide Squad and Peacemaker. Gunn seems to have a great working relationship with WB, so it could very well be in the cards. The 50 plus year old franchise has been geared more towards kids throughout its life span with its latest film Scoob! only adding to that narrative. However, Scooby-Doo’s most memorable work has always skewed more dark with the best examples being the animated classics Scooby-Doo on Zombie Island and Scooby-Doo and the Witch’s Ghost.

Like Gunn said, he’s currently very busy with Guardians of the Galaxy Vol. 3 and his various DC projects like Peacemaker Season 2. He might be the busiest director in Hollywood, but there’s no harm in asking. In the humorous words of Fred, “what could possibly happen by ringing a doorbell.” Who wouldn’t want to see a rated-R Scooby-Doo 3 with Gunn behind the camera? In a world where Michael Keaton is back as Batman, stranger things have happened. However, while we imagine the potentially blood-soaked possibilities of a rated-R Scooby-Doo 3, you can watch the first two live-action Scooby-Doo mysteries on HBO Max now. Check out the trailer for the first film below:

Swiggy announces permanent work-from-anywhere policy: Who will have to come to office, and not