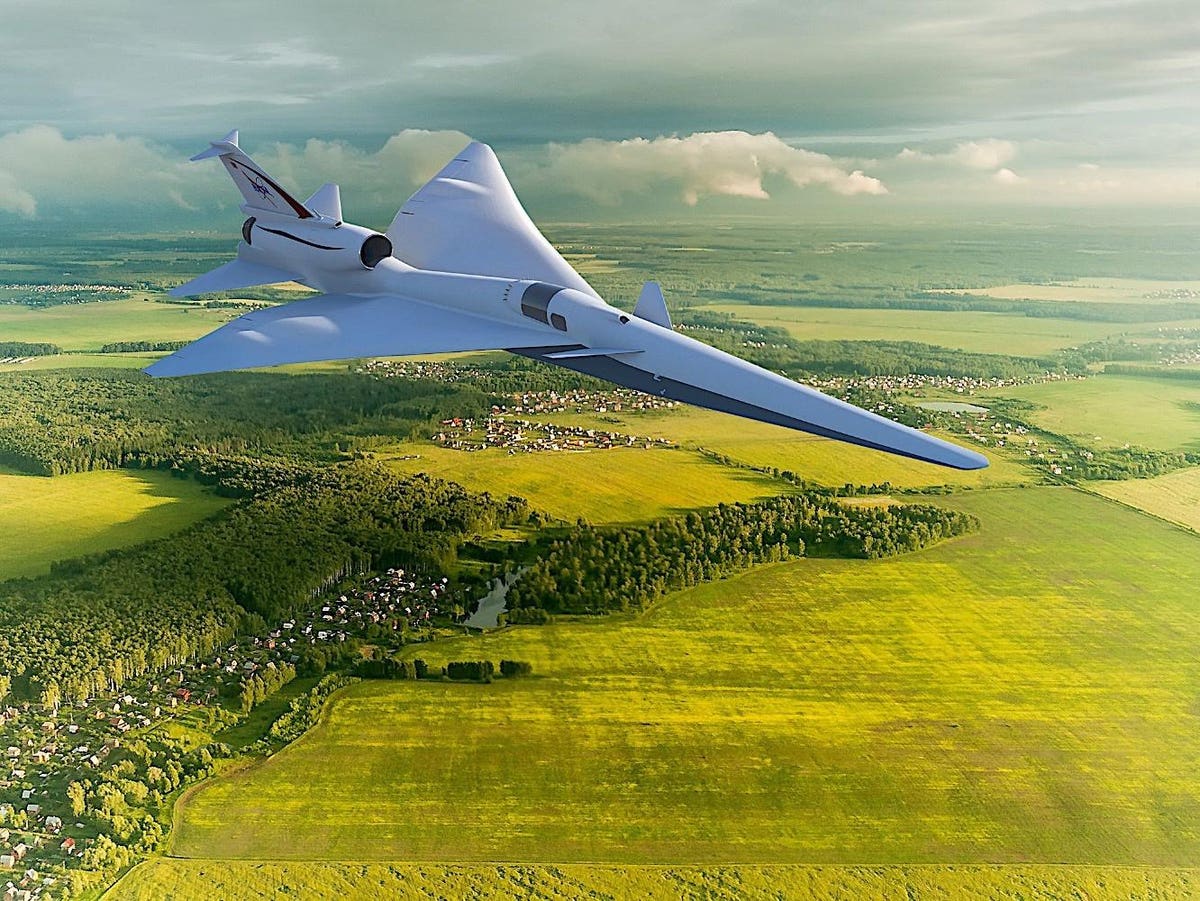 NASA’s X-59 Quiet SuperSonic Technology (QueSST) demonstrator has a long, needle-nose shape well suited to minimizing sonic booms but no forward canopy for a pilot to look through. The Agency plans to get around that problem with the first artificial vision system in an aircraft with no forward view.

When the X-59 begins flight testing in 2022, its mission will be to prove whether a combination of airframe shaping, engine placement and operational techniques can reduce loud sonic booms created by aircraft flying at supersonic speed to a quiet thump. To do that, the X-59 will fly at 55,000 feet at Mach 1.4, (925 mph) over different terrain and different communities in the U.S. starting in 2024.

As it does so, its pilot will rely on a NASA-developed eXternal Vision System (XVS) as his eyes to see forward-quarter air traffic and other in-flight obstacles not sufficiently indicated by outside air traffic control systems like ADS-B (Automatic Dependent Surveillance-Broadcast) or onboard sensors like a Traffic Alert and Collision Avoidance System (TCAS).

In early September, NASA completed developmental testing of XVS outside of the QueSST airframe. Now it’s time to install the system into the X-59 which is in-build at Lockheed Martin’s
Palmdale, California facility. Installing the XVS components should be done by late November-early December but integrating the system will continue until the first flight in August 2022.

NASA’s XVS subsystem lead, Randy Bailey, calls the artificial vision system “the last line of defense” in the see-and-avoid domain where the pilot can use XVS to see another air vehicle coming at him. “Way before we get to that point we have ATC [air traffic control] and ADS-B information assuming the other [air traffic] is on it,” he explains.

Not surprisingly, the X-59 will file a formal flight plan with the FAA every time it flies despite the reality that most of its flights will be in daylight VFR conditions. Though the sun may shine brightly outside, the X-plane’s pilot will only see it from the cockpit through side windows or “transparencies” as NASA calls them.

Why No Forward Window?

A look at artwork of the supersonic transports proposed by Boom Supersonic and the now defunct bizjet maker Aerion shows both plan/planned forward-looking cockpit windows. Even Boom’s XB-1 demonstrator has a forward looking window for the pilot.

The X-59 dispenses with a forward canopy to maintain its long needle nosed shape Bailey says. He points to the Concorde which got around the problem of a long, vision obscuring nose by physically articulating it downward for takeoff and landing.

“That mechanism was extremely heavy. We started looking at [the vision problem] at NASA under the High Speed Civil Transport program back in the 1990s.”

NASA concluded that an articulating nose was not only too heavy but too complex and costly for the relatively affordable low-boom X-plane it wanted to design. “We wanted to make an ‘electronic window’ and we thought the technology had matured enough,” Bailey explains.

The shape of the X-59 is critical to its low-boom characteristics. Its single-pilot cockpit section is actually taken from the rear of the two-place Northrop T-38 advanced trainer. “How Boom overcomes the challenge of visibility over the nose is up to them,” Bailey says. It’s worth noting that the proposed supersonic Overture airliner isn’t focused on noise. The company is called “Boom” after all.

As can be seen in the title image, the main 4K camera resides atop and slightly ahead of the cockpit, semi-flush with the surface to reduce drag. It’s augmented with synthetic vision capability, allowing the pilot to artificially see through fog and clouds as in some airliners. It’s not a primary feature of the system however and the X-59 won’t often be flying through vision-obscuring weather.

A second camera underneath the nose provides a part-time downward forward view. It extends for the takeoff/landing phases of flight and, like landing gear, retracts for cruise. The primary camera offers a 20-degree vertical by 30-degree horizontal view of the outside. That’s not a lot but the pilot can look to 180 degrees, left and right, through the X-59’s side windows.

Inside the cockpit the 4K XVS monitor is directly in the pilot’s line of sight atop a pair of multi-function instrument displays behind the control stick. Small quarter-windows in the front cockpit section offer an oblique forward view of the outside but are obstructed by the canards on the nose.

“We could have gone with a higher resolution [display] for more capability but the cost and schedule would have been more risky so we stayed with something more attainable,” Bailey says. He adds that high resolution is necessary “but not sufficient [alone] for equivalent [artificial vision]. Contrast capability is the next most important component.”

NASA’s faith in XVS is based on test flying done from its Langley Research Center in Virginia. Boeing
expressed similar confidence in the remote vision system it launched with its KC-46 aerial refueling tanker. That system has proven only partly effective and a costly headache for Boeing and the Air Force.

XVS has a different task Bailey maintains and NASA has a deeper artificial vision background than Boeing. “We’ve been doing this for quite a while so we are confident that [XVS] will work as shown and as-proved to-date.”

The proof stems from flight testing in which XVS was installed in a NASA UC-12B (a Beechcraft King Air). An XVS-enabled pilot/observer sat in the rear cabin with a monitor but no forward view. Another observer/test subject sat in the right-front co-pilot’s seat looking out the front cockpit windows as normal. A safety pilot flew the UC-12 from the left-front pilot’s seat.

The XVS and visually-enabled observers were tasked with spotting other aircraft, usually flying an opposite heading toward the UC-12, the toughest sort of targets to discern visually. All aids like ADS-B and TCAS were turned off.

“We showed that the person using XVS actually had superior performance to the person looking through the windows,” Bailey says.

The flights were done in good weather generally below 10,000 feet in a variety of head-on near-collision approach type scenarios using a variety of targets including small general aviation Cirrus SR-22 and Lancair single-engine aircraft.

“Itty bitty white airplanes are hard to see,” Bailey confirms. “That’s the hardest traffic to see so that’s what we tried to simulate as best we could.”

XVS works well for targets transiting across the path of the enabled aircraft – from left to right across the pilot’s field of view for example. As such, limited time was spent validating its effectiveness in such scenarios.

The X-59 is expected to operate seamlessly with routine air traffic in all classes of airspace as it climbs up to its supersonic speed run altitude. With a projected 1000 flight-hour test program in store, it will be exposed to other traffic far more than previous X-planes.

As it collects the sonic data which NASA intends to disseminate to industry and the FAA, it will also be a test mule for artificial vision, similarly informing the world about XVS’ potential. Bailey and his colleagues have already talked with NASA’s space side about potential application of XVS to spacecraft.

They have yet to talk with the growing body of commercial spaceflight providers but they’re getting requests from these and others Bailey confirms.

“I’ve continued to get more and more comfortable with the XVS through flight tests and our X-59 flight simulators,” he says. That, in turn, comforts Randy Bailey who says he’s more than ready to see QueSST get its eyes.

“We’ve been doing this for a while with a lot of research programs. This is the first time [artificial vision] is going into an operational vehicle. We want to see our teenager go out and play.”

Denial of responsibility! TechCodex is an automatic aggregator of the all world’s media. In each content, the hyperlink to the primary source is specified. All trademarks belong to their rightful owners, all materials to their authors. If you are the owner of the content and do not want us to publish your materials, please contact us by email – [email protected]. The content will be deleted within 24 hours.
eXternal Vision Systemlockheed martinLow BoomNASASupersonicX-59X-59 Quiet SuperSonic TechnologyX-plane
0
Share