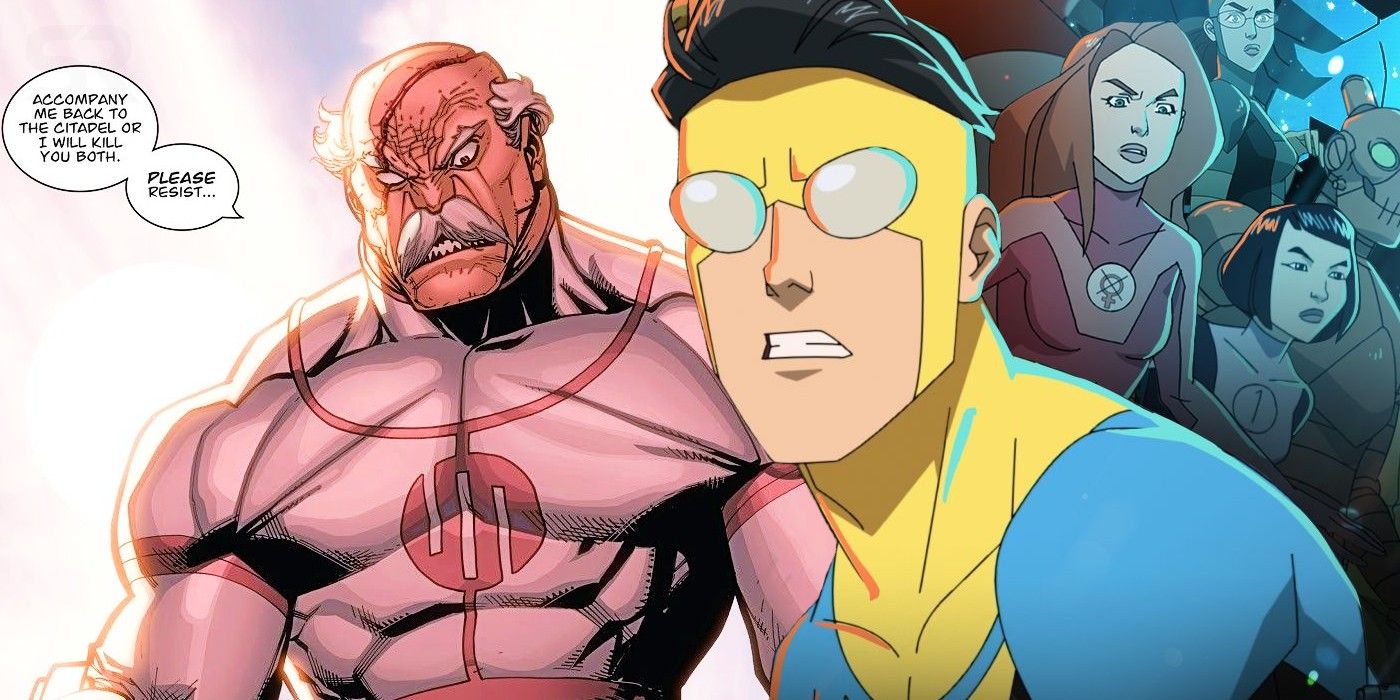 Invincible creator Robert Kirkman teases the animated show will make changes to Conquest’s story when the character properly debuts. Amazon Prime Video and Kirkman teamed up to bring his hit Image comic Invincible to the small screen a few years ago. The arrival of the show at the beginning of 2021 introduced a brand new audience to Mark Grayson (Steven Yeun), Omni-Man (J.K. Simmons), and the sprawling superhero world that exists around them.

The success of Invincible and acclaim to its first season gave Amazon the confidence to renew the series for two more seasons already. The season 1 finale ended with one of the comic’s most memorable sequences, the destructive battle between Invincible and Omni-Man. But, Invincible season 1 ended by also teasing several different storylines for the future. A closing montage hyped multiple villains that Mark Grayson will have to fight next, but the finale also teased the arrival of another dangerous foe: the Viltrumite warrior known as Conquest.

Details on Invincible season 2 and season 3 are still largely being kept under wraps, but the comics should provide fans with a general idea of where Kirkman’s story will go next. During his [email protected] 2021 virtual panel, Kirkman revealed which characters from the comics he is most excited to introduce who weren’t featured in season 1. Without any hesitation, he responded that Conquest is the “obvious answer” and teased some of the exciting changes to his story that he’s already cooking up.

Look, the obvious answer is Conquest. I think that we’re all looking forward to seeing Conquest. We got a small glimpse of Conquest in season one, and hopefully we’ll be seeing him very soon. I know there’s a lot of tweaks to that story, a lot of enhancements to that story that I’m very excited about that I’ve been cooking up. So I can’t wait for that.

Conquest is certainly one of the most menacing threats Mark Grayson faces during Invincible, so his introduction on the show will bring a whole new level of pain to the lead character. Like any other Viltrumite, Conquest hails from Viltrum and is one of the race’s leading figures when the events of the comics take place. He pushes Mark Grayson to some dark places as well, and Conquest plays a central role in some shocking moments and fights during his tenure. There’s a lot more to his story, but going into those details very well could spoil major moments in Invincible, even with the changes Kirkman plans to make.

That said, it will be interesting to see exactly what parts of Conquest’s story Kirkman is keen on changing. He has not been afraid to change Invincible from the comics early on in major and minor ways. The first season moved up certain events in Invincible’s life and altered other characters and moments too. Kirkman even said during the panel that he thinks Invincible season 2 and 3 will be even better than what viewers have seen already, which will be quite the accomplishment based on the praise the show has received. While he didn’t confirm if Conquest will be in season 2, it is heavily implied this will be when he’ll enter the picture and dramatically change Invincible‘s story.

MORE: Invincible: The Truth Behind Omni-Man & The Viltrumites Explained