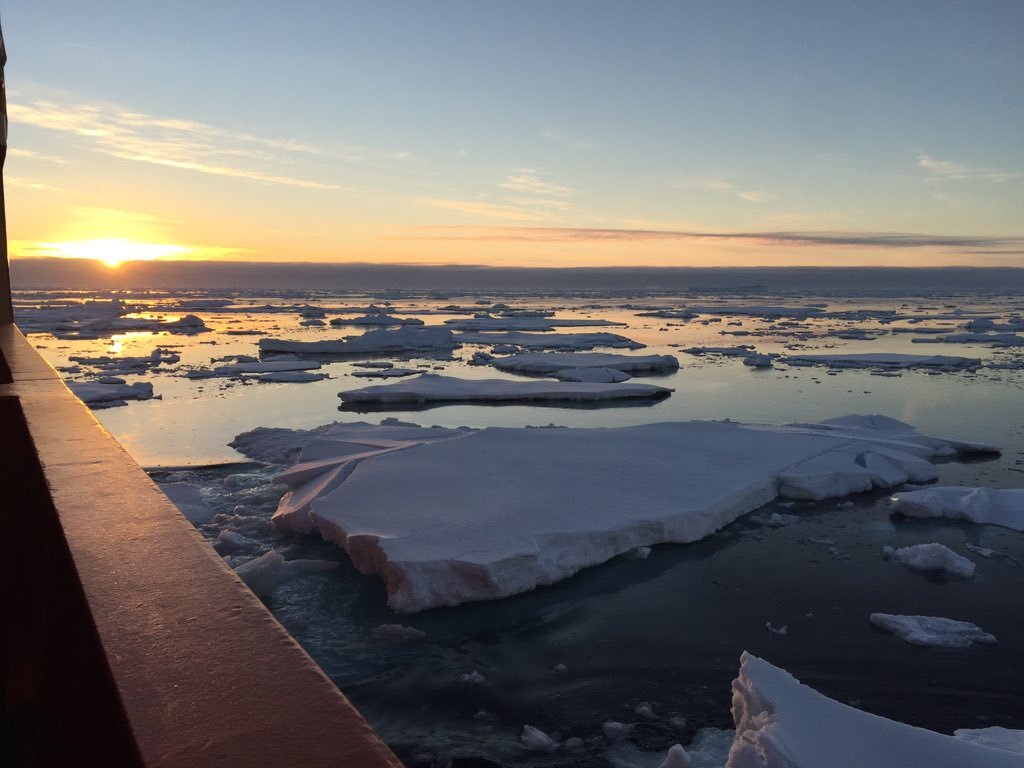 An investigation of how an Antarctic ice sheet melted thousands of years ago will improve contemporary climate models and projections of rising sea level, according to a recently published study with contributions from The University of Alabama.

Led by the University of Tokyo, researchers identified the mechanism for large-scale melting and retreat of the West Antarctic Ice Sheet 9,000 to 6,000 years ago, and current conditions suggest this mechanism is also a major driver of extensive melting events over the past 30 years, according a paper published in Nature Communications in May.

The research team analyzed sediment samples from the seafloor near part of the ice sheet in the Amundsen Sea.

“The samples were actually collected during my first expedition to Antarctica many years ago, and from tiny fossils in sediment on the seafloor, we were able to show that warm ocean water melted an ice shelf from below thousands of years ago,” said Dr. Rebecca Totten, UA assistant professor of geological sciences. “The great thing about this collaborative study is that we applied a new chemical technique to those samples and found that earlier periods of atmospheric warming were also really critical to the stability of major glaciers in Antarctica’s past.”

The team’s work revealed an influx of warm and moist air from an “atmospheric river” blowing over the ice sheet from the Pacific Ocean was triggered during a massive glacial retreat roughly 11,000 years ago. Recently, a similar band of humid air has been observed over the South Pole, causing temperatures to rise close to 14 degrees Fahrenheit, or about 70 degrees higher than normal, in March 2022.

Climate scientists are focused on the stability of the West Antarctic Ice Sheet, which is experiencing drastic changes each season that signal its response to a changing climate, as its melting is a major contributor to global sea-level rise, possibly raising sea level by 5 meters if melted away.

However, attention has been mostly focused on warm seawater flowing against the ice sheet, and less was known about whether atmospheric conditions were directly causing surface melting in this region.

Totten, a marine geologist and paleontologist, searches for microscopic clues to the past ice behavior by searching through the mud offshore for tiny, single-celled plankton. By studying what the ice sheet and ocean left behind, her team can inform models of how the West Antarctic Ice Sheet will behave in the future.

“It’s just like stepping back in time because each layer of sediment tells you about a different time period and how the ocean and glaciers were changing,” she said.

Specifically, Totten and her students look for the remains of microscopic, single-celled organisms, called diatoms and foraminifera, that have been preserved in these offshore sediments for thousands of years. The abundance of the microfossil remains and the species that were living at different intervals provide clues about the water that nourished them.

Totten’s work, alongside the new chemical analysis of sediment at the Atmosphere and Ocean Research Institute of the University of Tokyo, reveals that not only did warm seawater melt ice shelves from below, but atmospheric warming melted major regions of West Antarctica in the past due to warming through atmospheric rivers.

Building a fuller picture of the ice sheets’ behavior in the past, especially during major events in global climate change, will provide information for predictive models of ice stability and global sea-level rise, which will ultimately impact populated coastal areas in Alabama and the northern Gulf of Mexico.