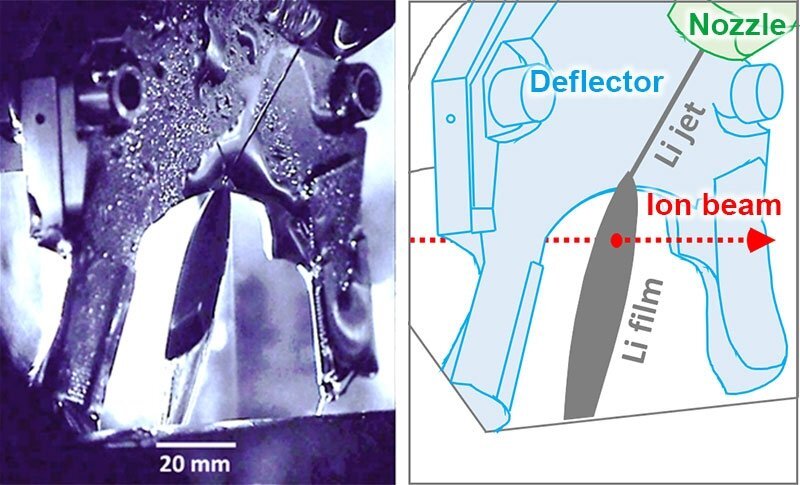 The Facility for Rare Isotope Beams (FRIB) accelerates heavy-ion beams at beam power up to 400 kilowatts into a target to create rare isotopes for scientific research. A charge stripper plays an essential role in this process. It strips additional electrons from the charged-particle beam to accelerate it more efficiently.

FRIB’s beam is too powerful for a conventional charge stripper made of carbon foil. This type of charge stripper would suffer severe thermal and radiation damages, limiting its lifetime and beam power. To overcome this, FRIB developed and demonstrated a state-of-the-art liquid-lithium charge stripper. Since it is self-replenishing, this new charge stripper is a superior heat remover and cannot be damaged by radiation.

A liquid-lithium charge stripper has a double advantage: It can produce as high a charge state as a solid charge stripper and last indefinitely. This new technology will help FRIB accelerate heavy-ion beams up to 400 kilowatts, and open new possibilities in various other high-power accelerator developments.

However, the conventional carbon stripper is the bottleneck, limiting beam power. In this research, a liquid lithium film with a thickness of 10–20 micrometers (about one-tenth the thickness of a human hair), flowing at more than 50 meters per second (180 kilometers per hour or 112 miles per hour) was stably formed in the accelerator beamline at FRIB, a Department of Energy (DOE) Office of Science user facility at Michigan State University.

Xenon, argon, and uranium beams were applied to the film, and its stability and stripping capability were measured. The results showed the lithium film was an effective heavy-ion stripper even with the uranium beam. Together with the success of an earlier high-power demonstration experiment at DOE’s Argonne National Laboratory, the research showed for the first time that the liquid-lithium charge stripper can significantly increase the accelerator power beyond the present limit.

The research is published in Physical Review Letters.