In Spain, dozens of villages struggle for drinking water 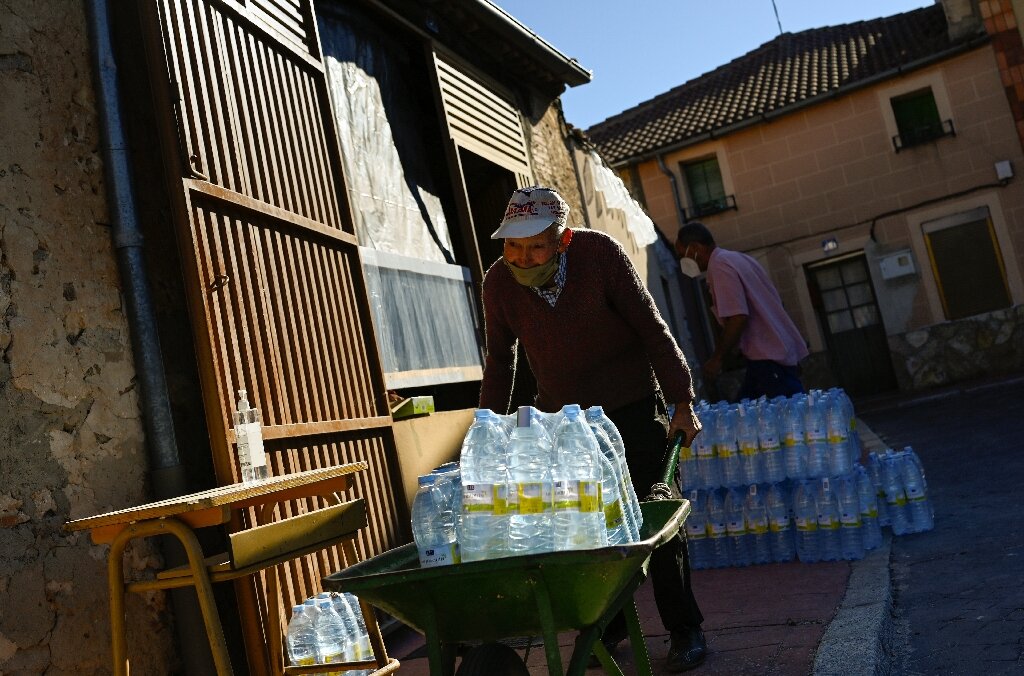 Less than two hours from Madrid, 76-year-old Francisca Benitez has to brush her teeth every night with bottled water because her village has no supply of drinking water.

In Lastras de Cuellar in the central Castilla y Leon region, nitrates and arsenic have made the water undrinkable for the village’s residents, who number 350 in winter and nearly 1,000 in summer.

And across the country, dozens of villages are suffering the same fate because groundwater resources are at risk from agricultural pollution, a lack of water quality controls and drought.

Every Monday, the villagers walk to the main square in Lastras to buy multipacks of mineral water in 1.5 litre bottles, sold at a discounted price, which some take away in wheelbarrows.

Alejandro Martin, 17, is there to help his 95-year-old grandfather bring home the precious resource which is then poured into a pan so they can prepare coffee.

Outside, clusters of empty plastic bottles dangle from the balconies alongside banners demanding access to drinking water.

“This is not normal in the 21st century!” protests Mercedes Rodriguez, 41, who belongs to a local residents association.

Mayor Andres Garcia also points to the “lack of (public) funding” which has slowed down a project to ensure drinking water supplies by the end of the year.

In Castilla y Leon alone, 63 municipalities were without running water in March, according to the region’s main television station.

National figures are not available.

According to the health ministry, a 2019 study of national water resources found that 67,050 samples—some taken from the same place on different dates—were undrinkable.

Nitrate levels are a cause for concern, with nearly three out of 10—28 percent—of Spain’s groundwater monitoring stations registering a concentration close to or above the potability threshold.

Fully 22 percent of Spain’s overall surface area—which covers 506,000 square kilometres (195,000 square miles)—is exposed to nitrate pollution due to the nature of the soil or through agricultural activities, the environment ministry says.

And many are increasingly blaming agricultural pollution for the water crisis.

Lierta, a tiny village in the northeastern Aragon region, has been deprived of drinking water since 2018 because of nitrate pollution and residents are currently fighting plans to set up a new farm for 3,000 pigs.

Under a scorching sun, a lone dog can be seen drinking from a fountain in a landscape dominated by vast golden wheatfields that are dotted with pig farms.

In this area, there are already “close to 20,000 pigs and just 50 villagers”, says 68-year-old Bernard Mas, a member of the residents’ association that has just managed to get the farm project suspended for a year.

In a country where pork products reign supreme, “intensive livestock farming and huge macro farms are a real problem” for local water quality due to the pollution from manure, says Luis Babiano, head of the Spanish Association of Public Water Supply and Sanitation Operators (AEOPAS).

But excess nitrates in water sources are mainly the result of “fertiliser use in agricultural activity” which is “the main problem” in the countryside, an environment ministry report found late last year.

“In rural areas, water resource management is lacking and residents of some small settlements may be drinking non-potable water without knowing it,” the report said.

And such concerns have even reached Brussels with the European Commission last year issuing an ultimatum, warning Spain to improve its water quality control or face heavy fines.

In the long term, drought could also jeopardise the quality of Spain’s water resources, especially as the impact of climate change gathers pace.

If the quantity of water decreases but the level of harmful substances does not, proportionally it means the level of such pollutants in Spain’s water resources increases, explains Babiano.

In Lastras, Rodriguez fears that the water shortage could spell the end of their little community.

“A village that doesn’t have water is destined to disappear. Who is going to come and live in a village where they don’t have tap water?” she wonders.

“Who is ever going to set up a business here?”