Humankind Gets a Release Date, is Coming to Stadia and You Can Try it Now

Humankind is a game I’m very interested in. Not that it should come as a surprise, strategy games are always my thing. The very first time I got a look at it was when it was revealed at Gamescom last year, where I was able to preview it and also interview Jeff Spock, the narrative director of Humankind. Recently I was also able to get hands-on with the OpenDev sessions, which I also wrote about.

But this piece isn’t about a hands-on or an interview (though one is coming), this is about some other big news. What is that? Well, we now have a release date for Humankind, pre-orders are now available, including that of a digital deluxe edition, and we now know that it will be launching on Stadia at the same time as it will be on the PC. 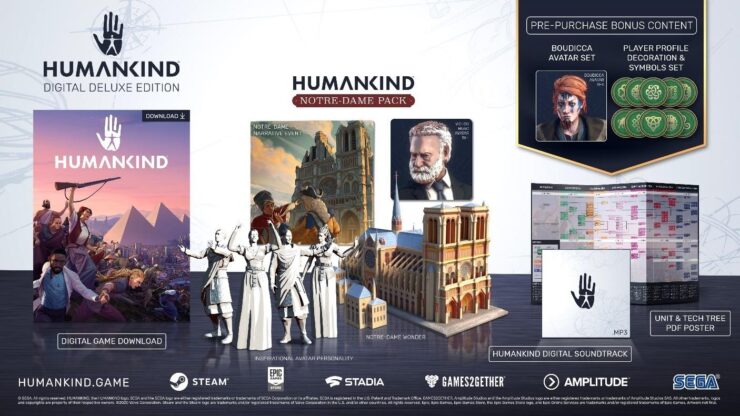 Let’s talk about Stadia first. Yes, Humankind will be coming to stadia when the game launches in April 2021. Okay, so we don’t have an exact launch date, but we know it’s going to be in April. For those curious how the game is going to play on Stadia, or for those of you with Stadia and wanting something to try out, Amplitude and SEGA have now released a Stadia exclusive OpenDev session.

What can you do in this session? Play the first 100 turns of the game as it stands right now. Specifically, this is what the devs are saying you’ll find in the OpenDev session:

You’ll traverse the Ancient Era as the Nubians, and then, for the very first time, play through the Classical Era as whichever of the 10 available cultures you’d like to choose.

From what you’ve played, you can give feedback to the developers at Amplitude and let them know what works and what doesn’t. Having spoken to the team, you’ll find my interview by the end of the week, this is something the team really pays attention to. The best part about it, if you don’t have Stadia, you can sign up for the free month and get access to this session.

As for the pre-orders/pre-purchases and deluxe editions of Humankind. If you pre-purchase the game, you’ll gain access to this content:

Cyberpunk 2077 Shows Off Its Vehicles and Styles, Stadia Version Release Date Locked Down

Should you go for the Digital Deluxe Edition of Humankind, this is what you’ll find:

There will also be a physical version of the game at select retailers, featuring either a steelbook or eco-friendly packaging. This version will also feature a physical version of the unit and tech tree, rather than the digital deluxe version. Also, this version will feature a two-sided decision coin, should you find yourself not sure which direction to go with your empire.

Again, Humankind will be releasing on the PC and Stadia in April 2021. Also, stay tuned for an interview I had with the developers on this news and more.

Here’s how Android apps will work on rollable phones, including…

Motorola looks to be developing new desktop, TV interfaces for its…

Fall Guys Is Getting A Doomguy Costume Soon