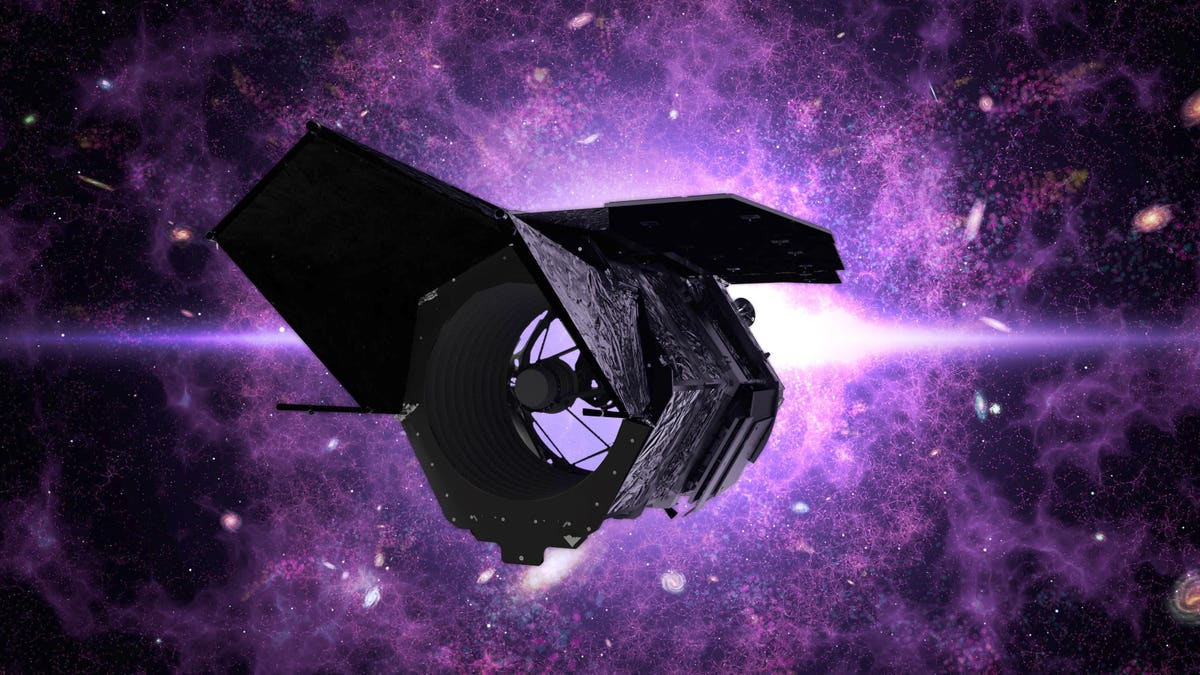 The James Webb Space Telescope (Webb) will, on July 12, 2022, become an instant icon when NASA and ESA publish a collection of “first light” photos.

However, it’s another as yet little talked about space telescope that could become the successor—as proven by a simulation by scientists of the kind of “mega-exposures” it will be able to capture.

The simulation was generated using a new synthetic catalog of galaxies to create a “mock” universe. Go visit the team’s interactive website and you can zoom and pan across the full-resolution image (it’s incredible!).

What is the Nancy Grace Roman Space Telescope?

Although the Roman is often compared to the Hubble because it will have the same size mirror at 2.4-meters, Roman’s wide-angle lens will give it 100 times the field of view that will allow it to map the Milky Way and other galaxies 100 times faster than Hubble.

However, its wide-field space telescope could work in its favor. “Roman has the unique ability to image very large areas of the sky, which allows us to see the environments around galaxies in the early universe,” said Nicole Drakos, a postdoctoral scholar at the University of California Santa Cruz, who led the study published in The Astrophysical Journal that contained the simulation. “Our study helps demonstrate what a Roman ultra-deep field could tell us about the universe, while providing a tool for the scientific community to extract the most value from such a program.”

As a reminder, here’s the iconic Hubble Ultra Deep Field, as taken by the Hubble Space Telescope almost 20 years ago. It transformed our view of the early universe, revealing galaxies that formed just a few hundred million years after the Big Bang.

What is the Hubble Ultra Deep Field?

It’s one of the deepest images of the cosmos ever obtained and shows almost nearly 10,000 galaxies. Requiring 800 exposures taken 11.3 days and 400 orbits of the Hubble Space Telescope around Earth, it was taken between September 24, 2003 and January 16, 2004.

The galaxies in this image are of all different ages, sizes, shapes and colours. About 100 are the among the most distant known, some of them existing when the universe was just 800 million years old.

“The Hubble Ultra Deep Field gave us a glimpse of the universe’s youth, but it was too small to reveal much information about what the cosmos was really like back then as a whole,” said Brant Robertson, an astronomy professor at the University of California Santa Cruz and a co-author of the study. “It’s like looking at a single piece of a 10,000-piece puzzle.”

He thinks Roman could give us 100 ore pieces of that puzzle, thus giving a fuller picture of what the early universe was like and opening up new scientific opportunities.

So what could Roman produce to rival that iconic image? Here’s the synthetic image that visualizes what a Roman ultra-deep field could look like:

And here’s an annotated version:

The 18 squares at the top of this image outline the area Roman can see in a single observation, with insets in the lower half of the image zooming-in

Excitingly this simulated image contains 10 million galaxies back to when the universe was only about half a billion years old.

Each of the 18 images would take about a week to expose for in order to capture the incredibly faint light.

It will enable astronomers to delve into the “epoch of reionization,” a period when the first light from stars and galaxies spread ultraviolet energy around a universe then just a half a billion years old.

Formerly known as the Wide Field Infrared Survey Telescope (WFIRST) until being re-named the Roman after Nancy Grave Roman, NASA’s first chief astronomer who was also known as the “mother” of the Hubble telescope.

According to NASA, the Roman has an expected development cost of $3.2 billion and a maximum cost of $3.9 billion.

Denial of responsibility! TechCodex is an automatic aggregator of the all world’s media. In each content, the hyperlink to the primary source is specified. All trademarks belong to their rightful owners, all materials to their authors. If you are the owner of the content and do not want us to publish your materials, please contact us by email – [email protected]. The content will be deleted within 24 hours.
Hubblejames webb space telescopejwstNancy Grace Roman Space TelescopeNASARomanWebb telescope
0
Share