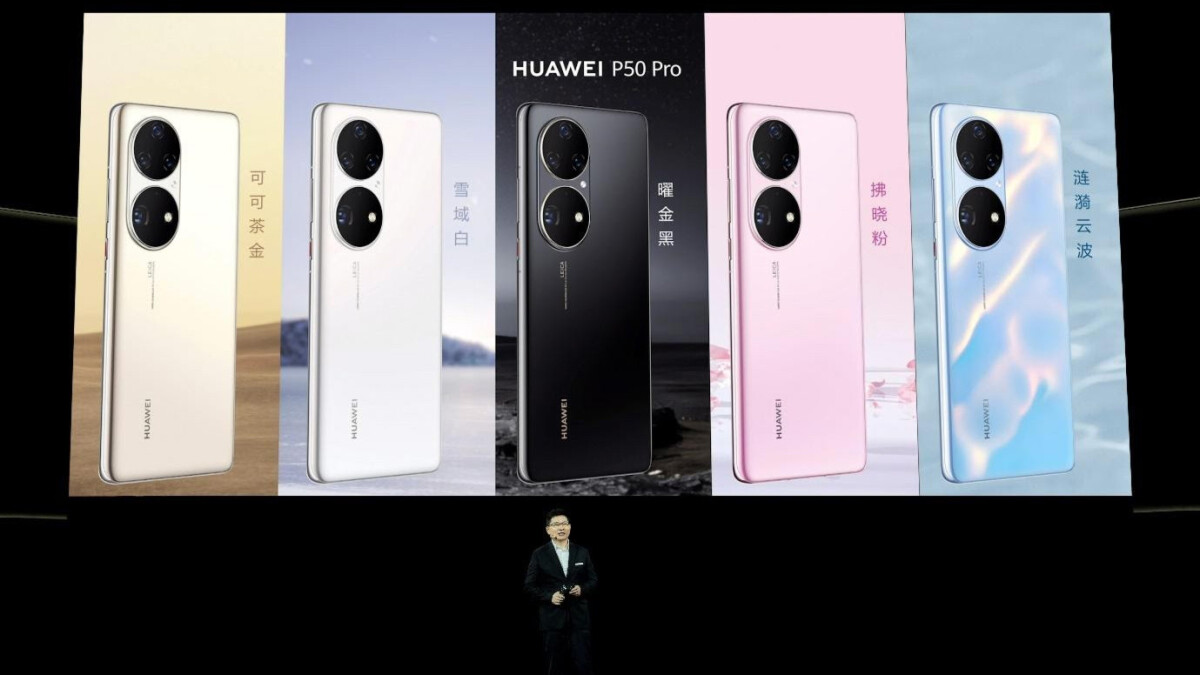 Months behind schedule for reasons that are obvious, the Huawei P50 series was announced in China this morning with HarmonyOS on board and a sophisticated camera system.

A new design language for the Huawei P50 and P50 Pro

From a design perspective, Huawei has scrapped most of what it implemented on the flagship Huawei P40 series in 2020 and created a new look that does its best to stand out from the crowd.The Huawei P50 duo feature updated screens that incorporate a smaller, centered punch-hole for the selfie camera. For reference, the previous-gen models used a pill-shaped cutout that was positioned in the top-left corner.

A 6.5-inch flat OLED panel has been chosen for the vanilla Huawei P50 model. It offers a 90Hz refresh rate with a 2,770 x1,224p resolution and is paired with nice reductions to the thickness of bezels, in particular the forehead and chin.

The Huawei P50 Pro, on the other hand, boasts a curved-edge 6.6-inch 2,770 x1,228p OLED display with a smoother 120Hz refresh rate. The same effort has been made to minimize the bezel thickness.

On the back of both smartphones is a new stadium-shaped camera module (Huawei’s calling it a Dual-Matrix Camera) that incorporates two circular bumps covered in glass and up to four sensors depending on the model. More on those cameras below.

Huawei is going all-in with the cameras, again

Huawei has built a reputation for creating camera powerhouses and that continues with the Huawei P50 series, potentially some of the best camera phones of 2021.

On the P50 Pro, a 50-megapixel f/1.8 sensor with OIS acts as the main shooter. It sits next to h a 40-megapixel monochrome sensor for extra detail and a 13-megapixel ultra-wide-angle camera. If that wasn’t enough, the flagship also includes a 64-megapixel f/3.5 telephoto camera that supports 200x digital zoom.

If the standard Huawei P50 is the smartphone you’re interested in, there’s no reason to be disappointed. It uses a triple-camera system that borrows the main and ultra-wide cameras from the Pro model.

The only downgrades on the Huawei P50 are the telephoto snapper, which offers a 12-megapixel resolution and is limited to a still-impressive 80x digital zoom, and the lack of a monochrome sensor.

As for the all-important selfie cameras, Huawei has selected a 13-megapixel f/2.4 sensor for both the Huawei P50 and P50 Pro. The only difference being that OIS is included on the Pro device.

5G connectivity is quickly becoming the norm, but the Huawei P50 series skips on the next-gen connectivity standard and instead settles for 4G LTE. The reason for this is likely the ongoing US trade sanctions, which limit Huawei’s ability to purchase 5G chipsets.

Powering the Huawei P50 is a special 4G version of the Snapdragon 888 that Qualcomm has created for Huawei. It sits next to 8GB of RAM as standard and the choice of 128GB or 256GB of internal storage.

That Snapdragon chipset is also used inside the Huawei P50 Pro, though some units in China will use the Kirin 9000 4G instead. Huawei’s most expensive smartphone will only be available with 8GB of RAM and 256GB of storage.

Completing the package is a 4,100mAh battery on the Huawei P50 and a larger 4,360mAh cell on the P50 Pro. Both support 66W fast charging, while the P50 Pro also adds 50W wireless charging. An IP68 water and dust resistance rating is included.

As for the software side of things, Huawei has chosen to ship its next flagships with HarmonyOS 2 pre-installed instead of Android 11.

A Popular Ryan Reynolds Movie Is No Longer Getting A Sequel