How This Year’s Drought, Extreme Heat Are Impacting America’s Crops 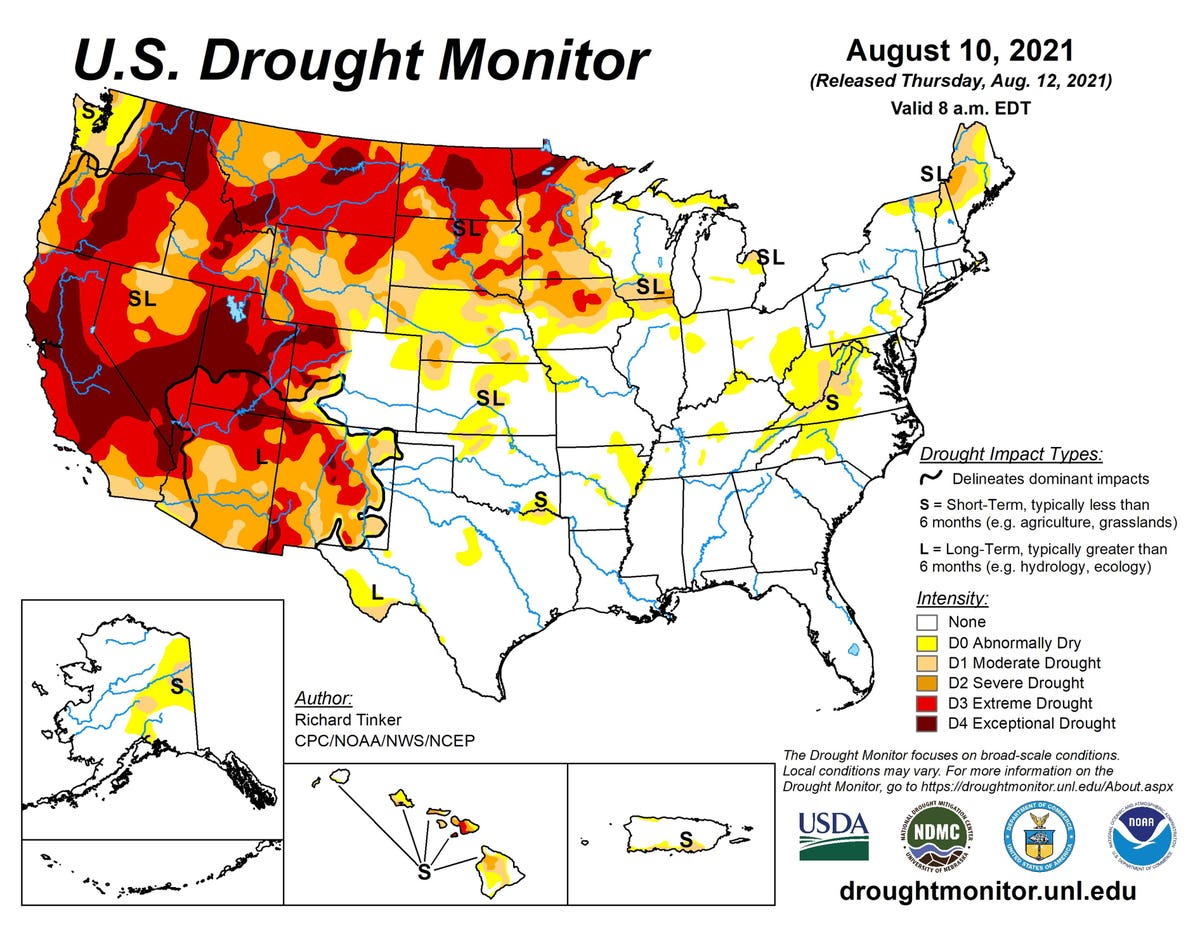 After coming out of the second wettest year ever recorded, much of the Northern Plains and western region of the country have been experiencing severe drought in what may be the driest year ever recorded. Drought has many impacts on the ecosystem, water systems and related management, the overall economy, fire management, and maybe most notably, agriculture. While the impacts of drought vary depending on how long and how intense the drought is, this year’s drought will have longstanding impacts on the agriculture industry.

The U.S. Drought Monitor, which analyzes and updates the drought situation across the U.S. each week has been showing all areas west of the Rockies and the states of North and South Dakota and Minnesota in some category of drought since the middle of 2020, and that is having an impact on today’s crops. While most row crops are planted in the spring, there are a select group of crops — including a type of wheat — that are planted in the fall, go dormant in the winter, then pop up in the spring. Crops like this can take advantage of a wetter winter or early spring, and can avoid harsher weather in the summer that would make yields suffer. Yet, because of last year’s drought conditions, fall planting didn’t offer the best start for many wheat farmers, as the dry conditions made it difficult for the young plants to develop a good root system prior to going dormant over the winter. The spring wheat planting isn’t faring any better as the ongoing drought through the spring and summer is causing problems.

In particular, the extreme temperatures that rose over 100 degrees Fahrenheit for some areas of the Pacific Northwest and Northern Plains exacerbated the drought and forced wheat crops to use more soil moisture to keep from wilting. According to John Baranick, an agricultural meteorologist with DTN*, in some instances, farmers found that the cost of harvesting the crop was higher than the price they will get for the grain, and have either abandoned those fields or have turned to cutting it early for animal feed. That is especially true as livestock pastures are underperforming due to the drought and there is an increased need to find feed or unload livestock.

Wheat is not the only crop suffering damage this year. The Corn Belt states of Minnesota, South Dakota, and especially North Dakota have seen mostly small and isolated rainfall events instead of large clusters of thunderstorms, known as mesoscale convective systems (MCSs). This area of the country relies on MCSs to provide much of the rainfall throughout the summer months since large weather systems that produce widespread light to moderate precipitation are rare compared to the other seasons. With weather patterns place so far this summer, those MCS events have been rare and so the region has continued to fall farther into drought this summer.

Baranick says the most important moisture window for corn is during its reproductive stages, which typically falls from mid-July to early August. This year, the drought has persisted throughout that time frame and corn conditions in Minnesota, South Dakota and North Dakota continued to fall, Baranick continued. As of August 3, theses states were at almost 100% covered by some form of drought, and North Dakota was nearly completely covered by severe drought on the U.S. Drought Monitor.

This has had a major impact on corn thus far, likely resulting in yield decreases. That’s not the only impact though, as the plants have gone through uneven and stunted growth, weed issues, insect problems, nutrient deficiencies, and a reliance on increased irrigation for some. All of these additional impacts increase the costs of inputs for farmers, and when coupled with the decreasing yield output, it’s a double-whammy of negative effects, Baranick said.

The effects of the drought are not over yet, however. With the Pacific Ocean forecast to trend toward La Nina again, the potential for even more limited rainfall across the West and Northern Plains is causing worry for farmers, not just for this year, but for next season as well. Back-to-back years of drought and poor crop yields, so there is recent evidence this could occur again and will be closely monitored.

*This author works for DTN.

Denial of responsibility! TechCodex is an automatic aggregator of the all world’s media. In each content, the hyperlink to the primary source is specified. All trademarks belong to their rightful owners, all materials to their authors. If you are the owner of the content and do not want us to publish your materials, please contact us by email – [email protected]. The content will be deleted within 24 hours.
cornDrought Monitorextreme heatmeteorologistNorthern PlainsrainU.S.weather
0
Share

Grimoire of Souls’ is coming exclusively to Apple Arcade