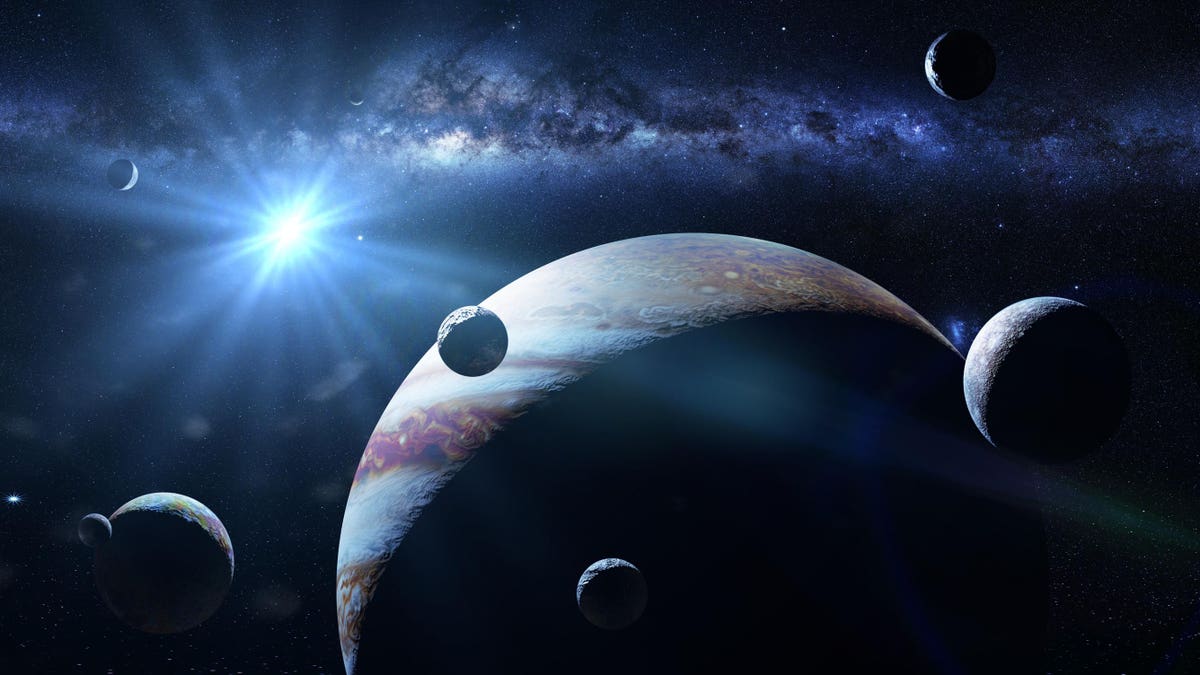 Earth hit the astrobiological jackpot some 4 billion years ago when a Mars-sized impactor slammed into our nascent planet and coalesced into our anomalously large Moon. Why was this so important?

Because over billions of years our Moon’s gravitational influence on Earth ensured that our planet’s obliquity (or axial tilt) remained stable enough to spawn the first complex life and ultimately sentient beings like us.

But a new paper accepted for publication in The Astronomical Journal expands on previous research indicating that Earth’s tilt can also be influenced by gravitational perturbations caused by other planets within our own solar system.

The most influential of all, the paper’s authors argue, is Jupiter —- our solar system’s behemoth located beyond the Main Asteroid Belt.

The paper details new dynamical computer models that demonstrate that Earth-like planets are likely to be sensitive to the orbital characteristics of a giant companion planet within the same solar system.

“We often take Jupiter for granted but having a giant planet like Jupiter can have a profound effect on the habitability of terrestrial planets like Earth,” Stephen Kane, a planetary physicist at the University of California, Riverside and one of the paper’s co-authors, told me. Our paper shows that there are many locations of Jupiter that would make Earth far less habitable than it is now, he says. But there are also some locations that would make Earth more habitable, by enabling more locations where water is able to be sustained in a liquid state, says Kane.

But Pam Vervoort, the paper’s lead author and a doctoral candidate in earth and planetary science at the University of California, Riverside, has a slightly different take.

Planetary architecture, including the presence of a giant companion planet such as Jupiter, determines how the long-term climate of an exoplanet evolves, Vervoort told me. It is common to assess the habitability of an exoplanet during one point in its orbital evolution, she says. But we should really consider how the climate (and habitability) varies over astronomical timescales and assess whether a planet can be considered habitable now and if it was habitable in the more distant past, she notes.

How would such cycles play out on other earths circling sunlike stars?

A highly oblique planet could form ice belts near the equator while a low obliquity planet may have ice caps at the poles, says Vervoort. This would result in rigorous long-term climate cycles, she says. It has been proposed that a planet could even oscillate between a ‘snowball state’ and ‘ice free state,’ says Vervoort.

In our own Solar System, Jupiter causes Earth’s orbit to vary between phases of near circularity to slightly more elliptical in shape, says Vervoort. The eccentricity plays an important role in climate because a planet on a more eccentric orbit receives more stellar energy annually compared to a planet with a circular orbit, she says. On Earth, for instance, changes in eccentricity are linked to the coming and going of Ice Ages roughly every 100,000 years, she notes.

The cycling in and out of Ice Ages wouldn’t have occurred if it wasn’t for Earth’s tilted axis (obliquity) and the constantve changes to earth’s orientation (precession), says Vervoort. Obliquity and precession determine how much seasonality each latitude experiences, she says. Earth breaks out of an Ice Age when the Arctic summer insolation is high enough to melt the northern ice caps, says Vervoort. This happens when Earth’s orbit is more elliptical, and the Arctic is tilted to the Sun during its closest approach, she notes.

Is obliquity the unsung factor in the habitability equation?

Modern observational technology currently prevents us from constraining the obliquity angle of known exoplanets, says Vervoort. But I would not rule out the possibility of life emerging on an exoplanet with extreme obliquity variations over hundreds of millions of years, she says. Even on highly oblique planets, life could originate in hotspots where the conditions may be just right, she notes.

As for having a large gaseous planet in one’s solar system?

“Having a giant planet as a neighbor to an exoearth is a blade that cuts both ways,” said Kane.

Denial of responsibility! TechCodex is an automatic aggregator of the all world’s media. In each content, the hyperlink to the primary source is specified. All trademarks belong to their rightful owners, all materials to their authors. If you are the owner of the content and do not want us to publish your materials, please contact us by email – [email protected]. The content will be deleted within 24 hours.
EarthJupiterMoonStephen Kane
0
Share