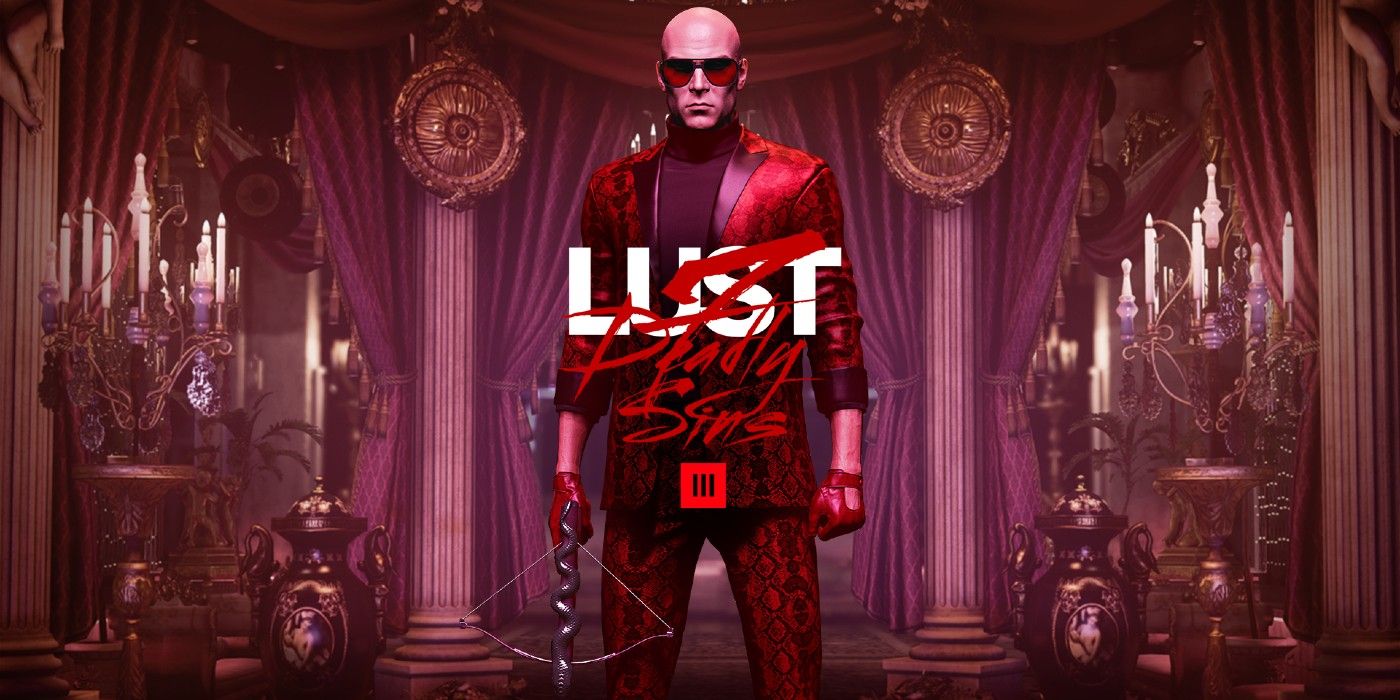 The latest of Hitman 3’s Seven Deadly Sins DLCs has been revealed, which sees Agent 47 head into a world of lust and treachery in a striking new suit.

Developer IO Interactive has released a new trailer for the upcoming Hitman 3 DLC – Seven Deadly Sins: Lust – which includes a first look at Agent 47’s eye catching scarlet suit, as well as his new and lethal weapons. The World of Assassination trilogy concluded with Hitman 3 in January 2021, to waves of critical and commercial success. After a mere week on the market, IOI revealed that sales of Hitman 3 had already covered the cost of the game’s entire development.

Since then, IOI has been releasing a variety of new content for Hitman 3. So far, along with game updates, fans have been able to partake in several new DLCs, each centered around one of the Seven Deadly Sins. These have comprised of Greed, Pride, and Sloth thus far, with the final sins being revealed at a later date. Each DLC has offered additional mission content for Hitman 3’s players, including new outfits, weapons and escalations. These have incorporated a rather gregarious mirrored suit named “The Narcissist” in the Pride DLC (where players found themselves under the instruction of a particularly pompous peacock) and an overlarge frog moneybox in the Greed DLC. And now, Hitman 3 fans have their first look at the fourth act within the Seven Deadly Sins collection – Lust.

Related: Why Hitman 3 Is The Last Hitman Game (For A While)

In the brand-new teaser for the Hitman 3 Lust DLC, fans get a closer look at just what will be available to them when it arrives later this month. As with previous installments within the Seven Deadly Sins collection, Agent 47 is once more decked out in a striking new suit. This time, the deadly assassin is robed in “The Scarlet Suit,” which, as the names suggests, is a deep crimson snake skinned number. Along with this new ensemble, Agent 47 will also be equipped with new weapons to add to his arsenal, including “The Serpent’s Tongue” and “The Serpent’s Bite,” on the DLC’s release. And, of course, there will be the customary Hitman 3 escalation to play through, this time entitled “The Lust Assignation.” The full trailer can be watched below.

Along with adding new content to the final installment to its World of Assassination trilogy, IOI has also been working on Project 007, an upcoming James Bond videogame that will focus on the spy’s origin story. It is currently unclear if, when the Seven Deadly Sins series concludes, IOI will continue to add more updates for Hitman 3, or if its attentions will turn from the ICA’s Agent 47 to focus more intently on the British Government’s illustrious Agent 007 instead.

Next: Hitman Games Will Return After Agent 47 Has “A Bit Of A Rest”

Is Storm In Black Panther 2? Who Michaela Coel Could Be Playing

Victoria is a freelance writer from the UK with a love of good games, bad films and buffet breakfasts. Affectionately known as Lady V, when she tells people she writes about gaming news, they assume she is talking about pheasants and shotguns. She is not.
You can follow her on Instagram and Twitter via @lilchopshopgal