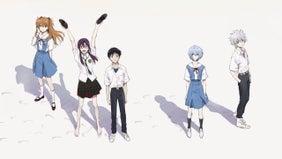 He said this during a San Diego Comic-Con panel today, reflecting on the 16 years it took him to finally end the series, saying he’d like to make more live-action movies before he returns to animation, adding that “nothing has been decided yet.”

“Making a live-action video is totally different from animation,” he said. “Because I can do a lot of things that I can’t do with animation, that’s why I’m really looking forward to it. I want to do things that are only possible in live-action.”

Anno is no stranger to live-action films, having started with Love & Pop in 1998 and continued with films such as Shiki-Jitsu, Cutie Honey, Shin Godzilla, and most recently, Shin Ultraman. However, he’s spent a meaningful chunk of his career focusing on Neon Genesis Evangelion and its subsequent related projects instead.

As a part of the Comic-Con 2021 panel, Anno spoke about Evangelion: 3.0+1.0 Thrice Upon a Time, which is airing in the West next month. We reviewed the finale when it debuted in Japan earlier this year, and found it to be an overall hopeful, positive, and satisfying end to the saga.

Rebekah Valentine is a news reporter for IGN. You can find her on Twitter @duckvalentine.

How to Use The Neutrino-Gun (& What It’s For)