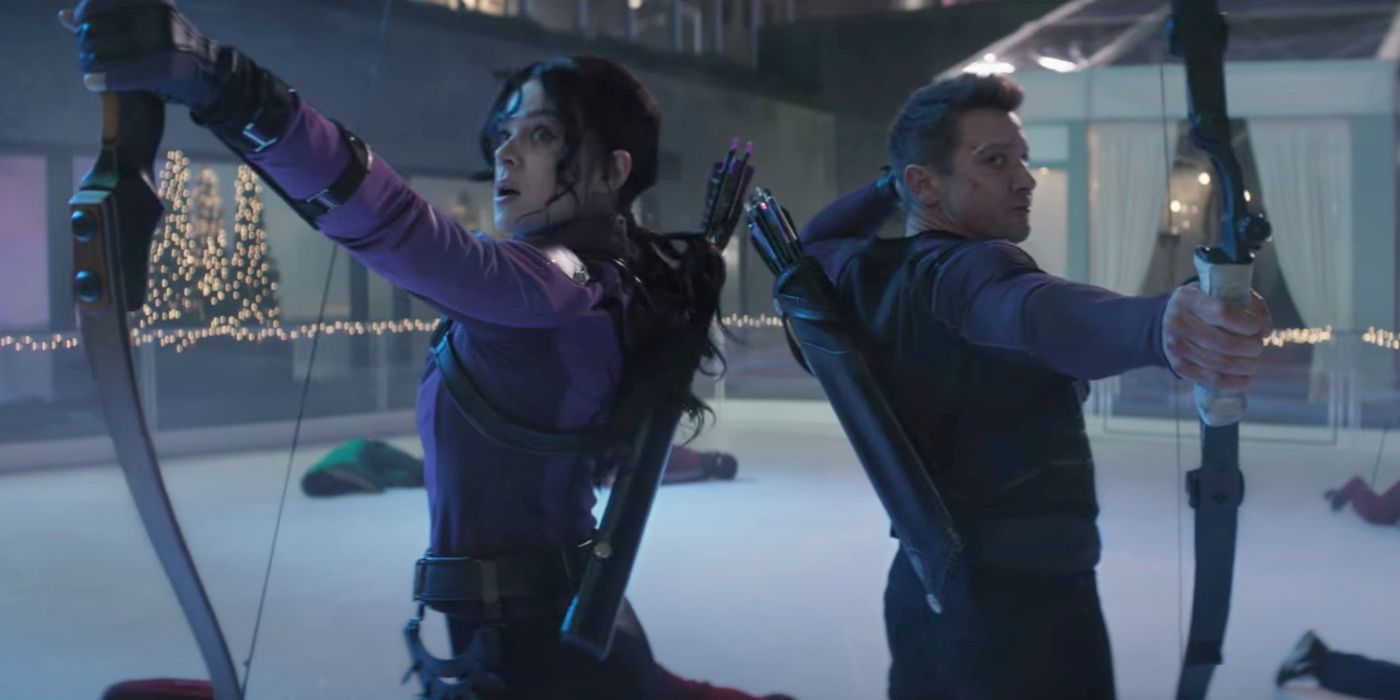 As the premiere date for Disney+’s Hawkeye inches closer and closer, the streamer continues to release new footage and information about the upcoming series — including a brand new teaser, showcasing the festive holiday cheer of Marvel’s newest series. Disney+ revealed the new trailer, which features more footage of Hailee Steinfeld as Kate Bishop, and what looks to be some staple comics moments for Hawkeye, including the Tracksuit Mafia and Clint Barton’s (Jeremy Renner) bag of “trick arrows.”

The new teaser highlights Barton’s difficulty balancing life with his family with the villains out for his hide — a result of his streak as Ronin in the five years between Avengers: Infinity War and Avengers: Endgame. All he wants to do is spend a decent Christmas in New York with his family, but anyone who’s ever seen a holiday film knows that Christmastime in the Big Apple is never easy, no matter what way you swing it.

This new Hawkeye footage also gives us a glimpse into the working relationship between Kate Bishop and Barton, who doesn’t seem to understand her twenty-something attitude or her obsession with him, particularly considering his past as a vigilante during The Snap. All set to Andy Williams’ “It’s the Most Wonderful Time of the Year,” the teaser also reveals that the first two episodes of Hawkeye will be able to stream when the series premieres on November 24, as opposed to a single-episode premiere.

This means that the series will only run for five weeks, as opposed to the usual six we’ve seen for shows like Loki and The Falcon and the Winter Soldier, but perhaps it has something to do with The Book of Boba Fett, and the fact that its Disney+ premiere lines up exactly with Hawkeye’s finale, leaving no episode overlap during an already busy holiday season. Either way, the six-episode series looks jam-packed with enough action to keep superhero fanatics happy with the last Marvel series premiere of the year.

Hawkeye also stars Vera Farmiga, Fra Fee, and Florence Pugh, and will premiere exclusively on Disney+ on November 24. Check out the brand new teaser below.

KEEP READING: ‘Hawkeye’: Who Is Kate Bishop? Everything to Know About Hailee Steinfeld’s MCU Character

Chances For Life On Venus Diminish In New Study

Apple Watch Series 8 Could Have Three Sizes Instead of Two

BT reveals next broadband upgrade plans, is YOUR…