Has Apple shrugged off its reputation for poor battery life? 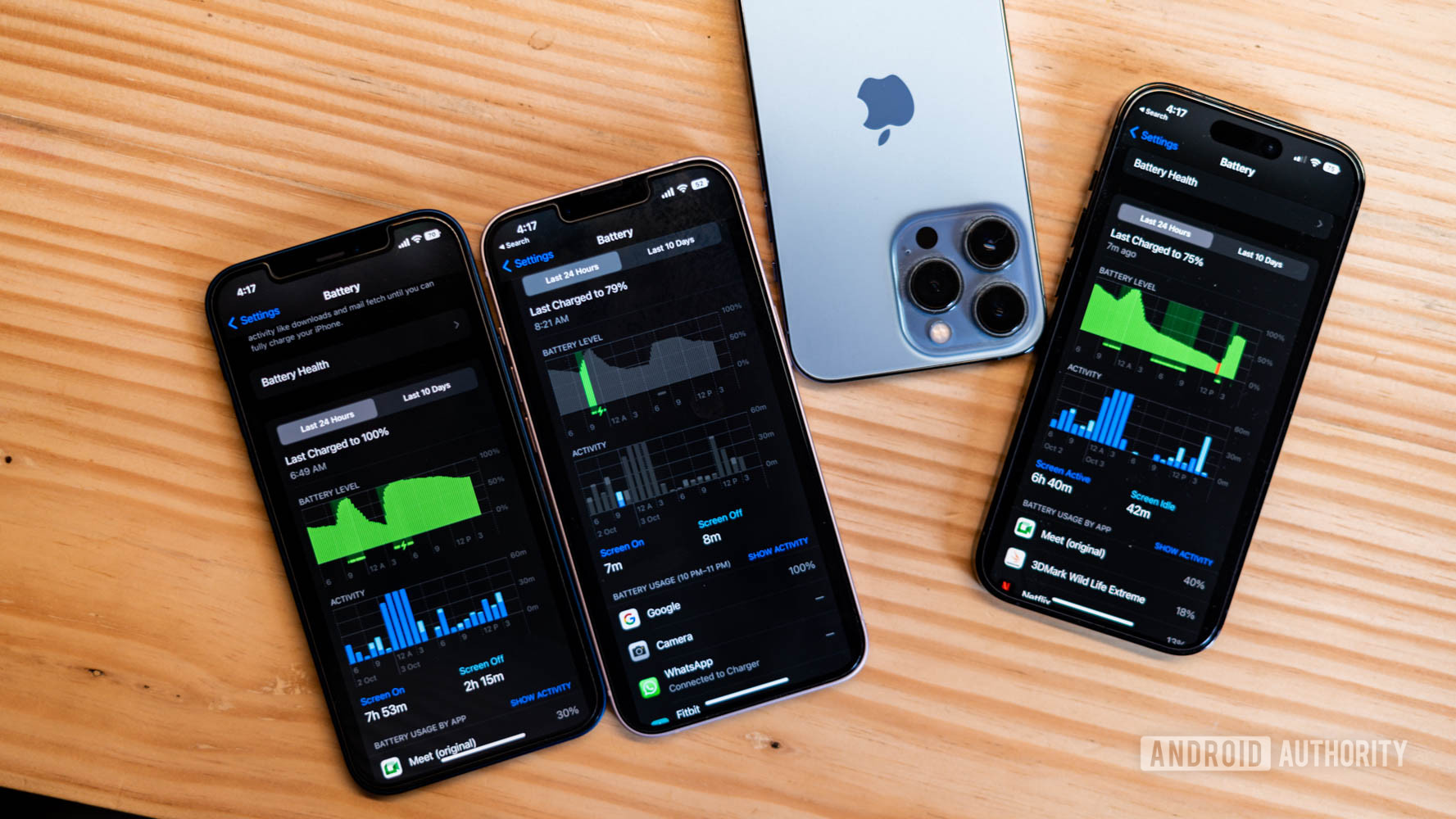 Apple has often ridden a fine line balancing powerhouse and “optimal” specs for years now, and nowhere has it been more apparent than in battery sizes. However, as you can guess, high-end computing and small battery sizes do not correlate to excellent battery life, and the iPhone has cultivated a bit of a reputation for delivering sub-par longevity.

Previously, if you wanted maximum battery life, the Max variant of the iPhone was your only safe bet to get some extra battery juice in your phone. But something seemingly changed with the iPhone 13 series. Sure, the phone continued to set new performance records, but the overwhelming focus was on efficiency. At its recent launch event for the iPhone 14 series, Apple once again talked about improving efficiency with its latest and greatest A16 Bionic chipset. So, what’s the deal? Does the iPhone chug battery life, or does it finally slug it out of the park with all-day longevity?

Are you satisfied with your iPhone’s battery life?

To test if Apple has once and for all shrugged off its reputation for poor battery life, Android Authority brought three generations of iPhones to the lab to determine once and for all if the days of terrible battery life when using iPhones are finally behind us. Here are the results.

While the Max-sized models have generally fared well with battery life, it’s the regular-sized iPhones that usually suffer. For our test bench, I sourced the iPhone 12, iPhone 13, iPhone 13 Pro, and iPhone 14 Pro to ensure a reasonable sample size of some of the most popular iPhone models. Meanwhile, my colleague Robert Triggs pitched in with data from the iPhone 14 to complete the data set.

Everyone’s smartphone usage pattern varies, and I’m firmly of the opinion that an arbitrary screen-on-time figure doesn’t necessarily indicate the kind of battery life you will get out of your phone. Moreover, there’s too much variance in battery capacities across iPhones, so the overall screen-on time or standby time wouldn’t make much sense without added context. Instead, we need to test efficiency.

Testing efficiency can give us a lot more data than an arbitrary screen-on time.

For our tests, we settled on a series of scenarios that gauged how much the battery dropped with 40 minutes of intensive gaming simulated via the 3DMark WildLife stress test, two hours of video streaming on Netflix, an hour of video calling, and an hour of music streaming from Apple Music — consecutively. All tests were conducted with displays calibrated to 350 nits to ensure a level playing field.

The test setup might not replicate your exact usage, but the heavier-than-average use should give us an idea of edge-case scenarios. Additionally, most users should expect slightly better overall battery life from their phones than the tests suggest.

Looking at the results, it is easy to see an overlying trend of improvements in battery efficiency. A cursory glance at the overall battery consumption at the end of our tests indicates a dramatic reduction in power consumption with the iPhone 13 series. Meanwhile, the iPhone 14 series largely continues the same trend. The iPhone 14 Pro, specifically, doesn’t quite match the benchmark set by last year’s Pro model but isn’t too far off either. However, adding a larger battery helps it achieve roughly similar longevity. That said, the results aren’t quite cut and dry.

Our iPhone 13 and 14 handsets survived the stress test with plenty of battery to spare.

Let’s start with some context. The A14 Bionic in the iPhone 12 was Apple’s first processor to be built on TSMC’s 5nm manufacturing line, but despite the efficiency gains that come with the smaller transistors, the discrete modem and dramatic bump in CPU performance over the A13 chipset meant that battery life suffered. In our tests, the phone dropped almost 30% charge over a 40-minute simulated gaming session and an additional 22% during a 40-minute Google Meet phone call.

While these figures sound relatively inefficient, the iPhone 12 was still, by and large, an all-day phone and could compete with and sometimes beat the best Snapdragon 888-based smartphones in terms of battery life.

The iPhone 13 series is where we start observing a sharp improvement in battery life. Apple’s shift to TSMC’s second-generation N5P process for the A15 Bionic helped it achieve significantly better performance-per-watt on the processor’s efficiency cores. This is particularly noticeable in our video call test, where the iPhone 13 consumes just 18% battery life, compared to 22% on the iPhone 12. That’s a 20% difference and speaks volumes about the more efficient GPU and CPU configuration. The gains continue in gaming, where the iPhone 13 drops just 24% charge over 40 minutes of intensive gaming, compared to 30% on the iPhone 12.

The A15 Bionic equipped iPhone 13 series improved battery efficiency by as much as 20%.

The A15 Bionic also sports an updated video decoder block which should theoretically result in more efficient video decoding, but we didn’t see much of an improvement there, and the iPhone 13 used up 10% charge during an hour of Netflix streaming. Overall, the A15 processor made substantial improvements to enable full-day use and, for many users, multi-day use.

Switching over to the iPhone 13 Pro, most of the same battery trends carry over, but there are a few notable differences. The phone proves even more efficient at video streaming, which can be tied to battery gains made via the variable refresh rate-enabled LTPO display. Battery consumption while video streaming dropped down to 6% compared to 10% on the iPhone 13, likely because of the lower refresh rate.

Read more: Now is the right time to buy the iPhone 13

The iPhone 13 Pro improves battery life further, despite packing a smaller battery, thanks to a variable refresh rate display.

Combined with the upsized batteries, the iPhone 13 series could significantly outpace the iPhone 12 lineup in terms of battery life. Interestingly, the iPhone 13 Pro sported a smaller battery than the regular model but could deliver similar longevity to the iPhone 13, thanks to the variable refresh rate display that dramatically reduced power consumption in several scenarios.

Switching over to the 2022 series, the iPhone 14, in particular, exhibits a slight enhancement in longevity. The phone packs the same A15 Bionic chipset with an additional GPU core as last year’s iPhone 13 Pro but drops the variable refresh rate display. As a result, battery consumption sees a slight uptick in tasks like video streaming, where the display remains locked to 60Hz.

On the other hand, the iPhone 14 shows significantly improved efficiency with gaming. Cumulatively, the results are similar to that of the iPhone 13 Pro despite the lack of a variable refresh rate panel.

The iPhone 14 Pro is an outlier in our efficiency tests, but the larger battery helps.

This brings us to the outlier, i.e., the iPhone 14 Pro. This year, only the Pro-variant is sporting the new A16 Bionic processor built on TSMC’s N4 fabrication process. Apple claims that the efficiency cores on the A16 Bionic use a third of the power of competing products, but our tests show that the higher clock speeds eliminate much of the gains made with battery efficiency.

In most of our tests, the iPhone 14 Pro tracks roughly in line with the iPhone 13 Pro except for the video calling test. We clocked a 21% drop in battery life here which is a noticeable increase over the iPhone 13 Pro and iPhone 14. This could potentially be due to the new display sporting a panel area above the Dynamic Island. While this would consume a bit more battery life, it doesn’t entirely explain a 4% increase. That said, the iPhone 14 Pro is known to have a battery-related bug, and we’ll circle back for another round of tests once an update has been rolled out.

Looking at the broader trends with Apple’s chipset engineering, it is clear that performance, and more specifically, performance-per-watt, is improving, but absolute gains are slowing down. To be sure, Apple leaped forward with the iPhone 13 series, both with performance and efficiency, and has continued the trend with the iPhone 14. However, many of those gains in power efficiency are also a by-product of elements like more frugal displays, be it through absolute power consumption or the ability to downclock the refresh rate. We’ve seen similar benefits for Android smartphones sporting LTPO displays too.

With nine to 10 hours screen-on time, battery life is no longer a reason to put off an iPhone purchase.

Unlike previous years, Apple is also finally increasing battery sizes, which helps mitigate some of the effects of battery-guzzling components. What can’t be denied, however, is that the iPhone has shed its image of battery inefficiency. Even the most inefficient smartphone on our test bench, the iPhone 12, ended the benchmark session with about 35% charge leftover — despite the grueling benchmarking session.

With a more typical use case, nine to 10 hours of screen-on time is not out of the picture for the latest iPhone 14 series. That’s a particularly astounding figure, keeping in mind Apple’s lead in performance and a battery that is a third smaller than most equivalent Android phones. If battery concerns have previously put you off, don’t fret, longevity is no longer a reason to avoid Apple’s iPhone.