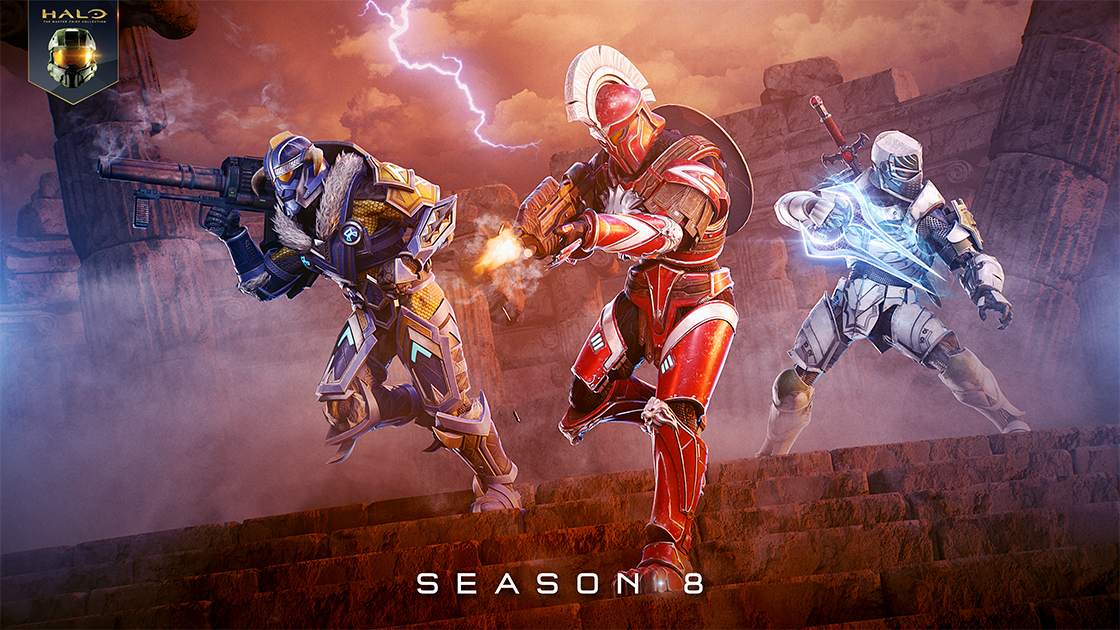 The marquee addition to Season 8 is the addition of Halo: Combat Evolved and Halo 3 to the Custom Game Browser, giving those who like creating their own Halo experiences much more to play around with.

100 new tiers of customization options are coming to Halo 3 as well, including armor, back accessories, visors, and customization options for weapons and vehicles. These armors are inspired by pieces from Greek, Norse, and medieval European history–a major change from previous armor set offerings. You can try your newly customized armor on Icebox, a map for Halo 3 that is a reimagining of Halo 2’s Turf.

Other notable improvements include graphical and audio fixes for most of the games offered in the Master Chief Collection, as well as new color blindness options in the Accessibility menu and new golden moa statues in Halo 3 specifically that tie to certain challenges. The full patch notes are posted below.

A new map for Halo 3 arena modes, “Icebox,” is now available in matchmaking and custom games. Icebox is a reimagining of the multiplayer map “Turf” from Halo 2.

The Custom Game Browser (CGB) has been improved to include Halo: Combat Evolved and Halo 3, as well as updates to filters, search options, and updates to the Create, Browse, and Search pages.

UPDATES TO VIEW MODEL OFFSETS FOR WEAPONS ACROSS ALL MCC GAMES

View Model Offset settings are now available in the Settings under Gameplay. They can be set by weapon category and are available for all games within Halo: The Master Chief Collection.

Changes to how view model offsets appear in-game have been made in response to community feedback. You can read more about the implementation of View Model Offsets in this weekly MCC Development and Flighting Update.

CAMPAIGN COLLECTIBLES IN THE HALO 3 CAMPAIGN

Golden moa statues have begun appearing in Halo 3 missions in locations that change every week. These can be collected by shooting them and are tied to challenges.

Halo: Combat Evolved and Halo 3 now support vehicle and weapon customizations during missions if this option is toggled on in the campaign mission options.

For Halo: Combat Evolved, the heads-up display (HUD) can now be toggled between the classic or remastered HUD, and scaled manually or automatically to your display’s resolution with the Auto HUD Scale setting.

For Halo: Combat Evolved and Halo 2 Classic, the Gamma settings for classic and remastered campaign visuals are now separate settings. This allows visuals even closer to the original games.

PLAYER REPORTING IN SCOREBOARDS AND ROSTER

Scoreboards during and after a match now include the ability to report a player.

Steam accounts can now be linked to Xbox accounts in the player profile menu when playing on Steam. This populates the friends list with Steam friends.

PC players can now save or upload Forged map and game variant files from their recent custom games. A new “File Share Trust Level” has been added in Settings under “Gameplay.” It is set to “Official” by default but can be switched to “Friends” or “Anyone.”

Many improvements come from Halo Insiders feedback and Halo Support tickets submitted by our community. Thank you for participating and please keep submitting tickets! Here are the many fixes in this update:

Sony Direct PS5 restock today: what time and how to get the email invite

The Duke Of Edinburgh’s Award adds esports as part…