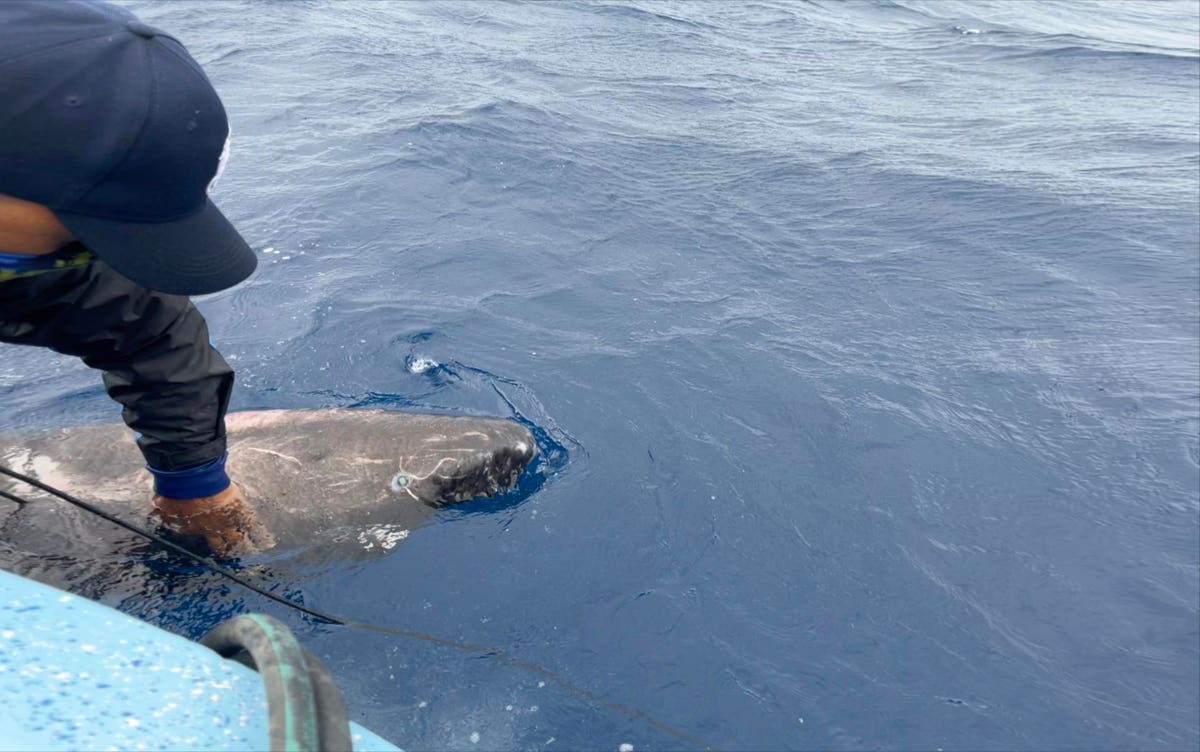 “At first, I was sure it was something else, like a six gill shark that are well known from deep waters off coral reefs,” Devanshi Kasana, a Ph.D. candidate in FlU’s Predator Ecology and Conservation lab, said in a press release. “I knew it was something unusual and so did the fishers, who hadn’t ever seen anything quite like it in all their combined years of fishing.”

Kasana was remarking on the large, peculiar animal tugging at the end of their line. Once called one of “nature’s least elegant inventions” by the New Yorker, the lumpish Greenland shark (Somniosus microcephalus) is largest fish in the Arctic Ocean — and the only shark found there year-round! Famous for their lengthy life span, and the worm-like parasites found on their eyes that eventually render blind, these sharks are surprisingly magnetic.

But their charming personality doesn’t explain why this shark was now bobbing on the side of a fishing boat in western Caribbean waters off the world’s second longest barrier reef. Kasana was working with local Belizean fishermen to tag tiger sharks (Galeocerdo cuvier) when the discovery was made. This? This definitely wasn’t a tiger shark.

But at first, Kasana didn’t know she had reeled in a Greenland shark. She texted Dr. Demian Chapman — her Ph.D. advisor and Director of Sharks & Rays Conservation Research at Mote Marine Laboratory & Aquarium — to share the news.

Thinking it was a six gill shark, she was caught off guard by her advisor’s response when he said it wasn’t that at all. It was a visitor from the Arctic! Or was it? Greenland sharks remain somewhat of an enigma to science. What is known about them is they tend to prefer the frigid waters of the Arctic and North Atlantic oceans, but they could be trolling the depths of the ocean all across the world. There is just so much scientists don’t know about them yet.

While Kasana and the team weren’t expecting to ever see a Greenland shark, they believe this recent discovery shows how partnerships can oftentimes pave the way for unexpected and intriguing new discoveries.

“Great discoveries and conservation can happen when fishermen, scientists and the government work together,” said Beverly Wade, Director of the Blue Bond and Finance Permanence Unit in the Office of the Prime Minister of Belize. “We can really enhance what we can do individually, while also doing some great conservation work and making fantastic discoveries, like this one.” Wade is eager to see what other fascinating discoveries the waters of Belize hold, as Kasana’s Ph.D. research is funded by Ellen DeGeneres’s The Ellen Fund, through the Endangered campaign. This campaign also provides support for Mote, FIU’s Predator Ecology and Conversation lab, the Belize Fisheries Department, and the shark fishing communities to expand on the shark monitoring efforts. Specifically, they are all focused on reducing shark catch and protecting shark populations. The collaborations don’t just extend from Florida and Belize, with a world Greenland shark expert University of Windsor Associate Professor of Biology Nigel Hussey giving the team four satellite tags in case another Greenland shark pops up. Chapman joked he would buy some lotto tickets if they catch another sleeper shark.

Denial of responsibility! TechCodex is an automatic aggregator of the all world’s media. In each content, the hyperlink to the primary source is specified. All trademarks belong to their rightful owners, all materials to their authors. If you are the owner of the content and do not want us to publish your materials, please contact us by email – [email protected]. The content will be deleted within 24 hours.
ArcticBelizeCaribbeanCoral ReefsGreenland sharkNaturesharkSharks
0
Share