This year we’ve seen smartphones with top-of-the-line specs like Samsung’s Galaxy Z Fold 2 and Note 20 Ultra, with odd gimmicks like the LG Wing and great designs like the LG Velvet. Google’s latest ‘flagship’ — and I use that term lightly — doesn’t fit any of these categories.

Instead, some might consider the phone boring or simple.

Yet, from my initial experience with the device, I can say that Pixel 5 might be all most people need from a smartphone, despite it lacking several features that some would come to expect from the company’s flagship.

When talking about Google’s latest smartphone, it’s important to remember that the phone only costs $799 CAD outright, which is pretty spectacular considering the manufacturer’s Pixel 4 series started at $999.

Over the past year, I’ve used and reviewed various smartphones, but the device I always go back to is the Pixel 4 XL. Now that I finally have the Pixel 5, I can confirm that the handset offers benefits over its predecessor, despite its less powerful Snapdragon 765 processor, lower screen resolution and smaller size.

In my less than a week with Google’s new flagship, the most significant upgrade I’ve come across so far is its battery. The Pixel 4 XL featured a 3,700mAh cell, and when I first reviewed the phone, I noted that I was able to squeeze out 16 hours of battery life with a bit more than five hours of screen time. During the five hours, I spent an hour listening to music, less than an hour of watching videos and, most of the time, scrolling through Instagram and other social media platforms.

My experience with the Pixel 5’s battery life has been so much better. On one occasion, the phone lasted 18 hours, with nine and a half hours of screen usage. My display usage included nearly two hours of video consumption, and almost a three-hour car drive typing in Google Docs, plus the time I spent scrolling through Instagram and Reddit, as well as messaging friends on Discord.

Google was able to get far better battery life out of the Pixel 5 thanks to its larger 4,000mAh battery, smaller screen size, and lower pixel resolution. And it’s probably worth noting that I use the phone’s ‘Adaptive Battery,’ so the battery should improve over time. Further, I utilized auto-brightness and I’ve yet to turn on the phone’s ‘Extreme Battery Saver’ mode. 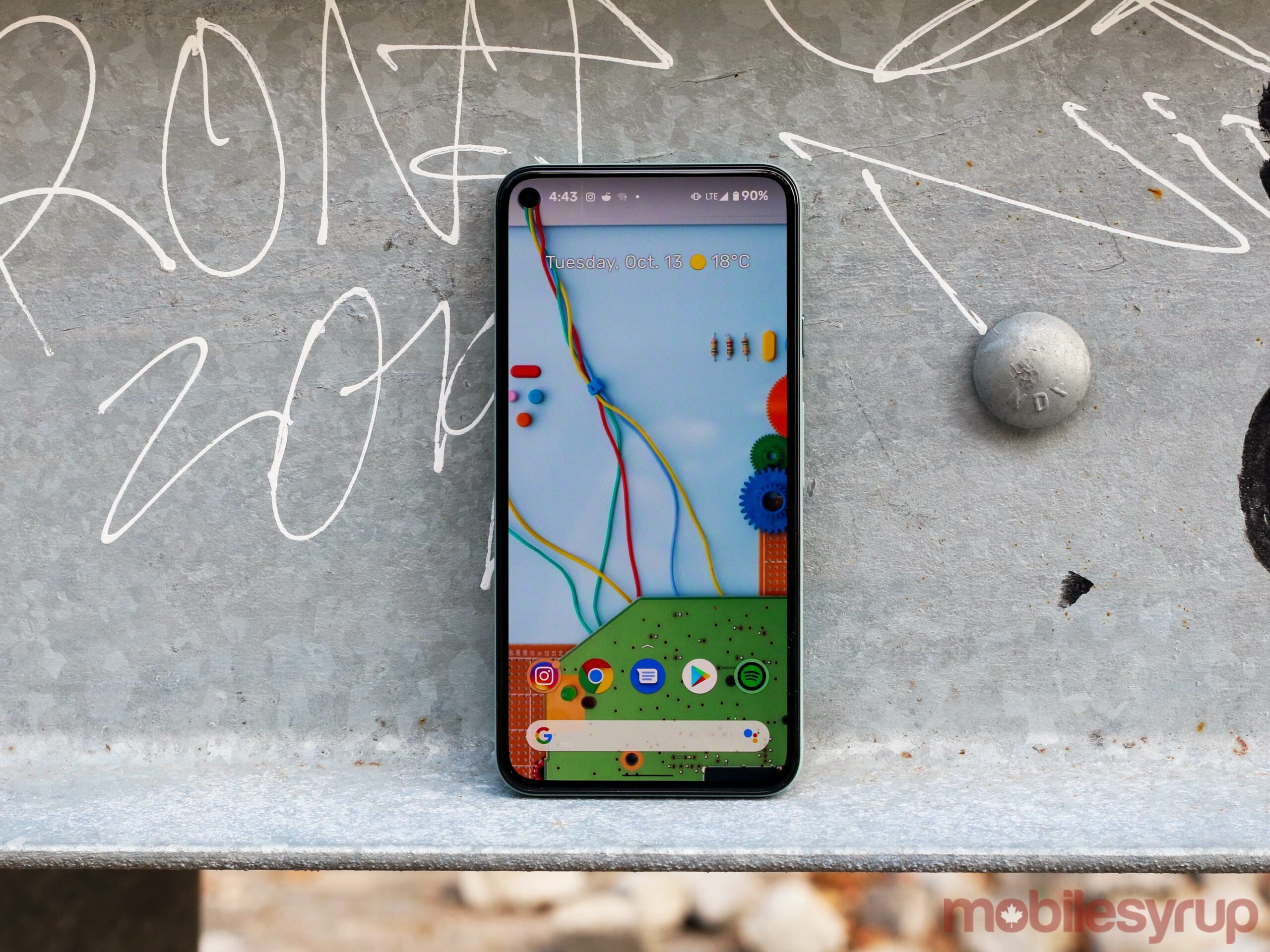 Another major change with the Pixel 5 is its appearance from the front.

The Pixel 4 series featured large bottom and top bezels, which made the handset look outdated. The Pixel 5, on the other hand, sports bezels that are a lot smaller, like many other high-end flagships on the market. Also, a hole-punch camera in the top right helps the device look much more modern than its predecessor.

This handset has been able to handle anything I’ve thrown at it so far, including watching videos on YouTube and Netflix, scrolling through Instagram and Reddit, keeping 20 apps open at once and playing games like Among Us and Limbo. I definitely think I need more time to put it through its paces, but so far, it stands up against smartphones with the higher-performing Qualcomm Snapdragon 865 processor.

I also like the feeling of the Pixel 5’s hardware. The smartphone’s rear is aluminum instead of glass, which is weird, and I can’t make up my mind yet regarding whether it feels more or less premium. Still, what I like about it is how sturdy the phone feels in my hand. Typically, smartphones feel fragile, and you’re constantly worried about dropping them, but the Pixel 5’s metal back helps it feel durable. However, I still wouldn’t advise dropping the handset, considering it lacks a MIL-STD grading. With the material, you won’t get any fingerprints or smudges on it either. It’s worth noting that the camera bump on the device is pretty tiny, allow the device to sit nearly completely flat. 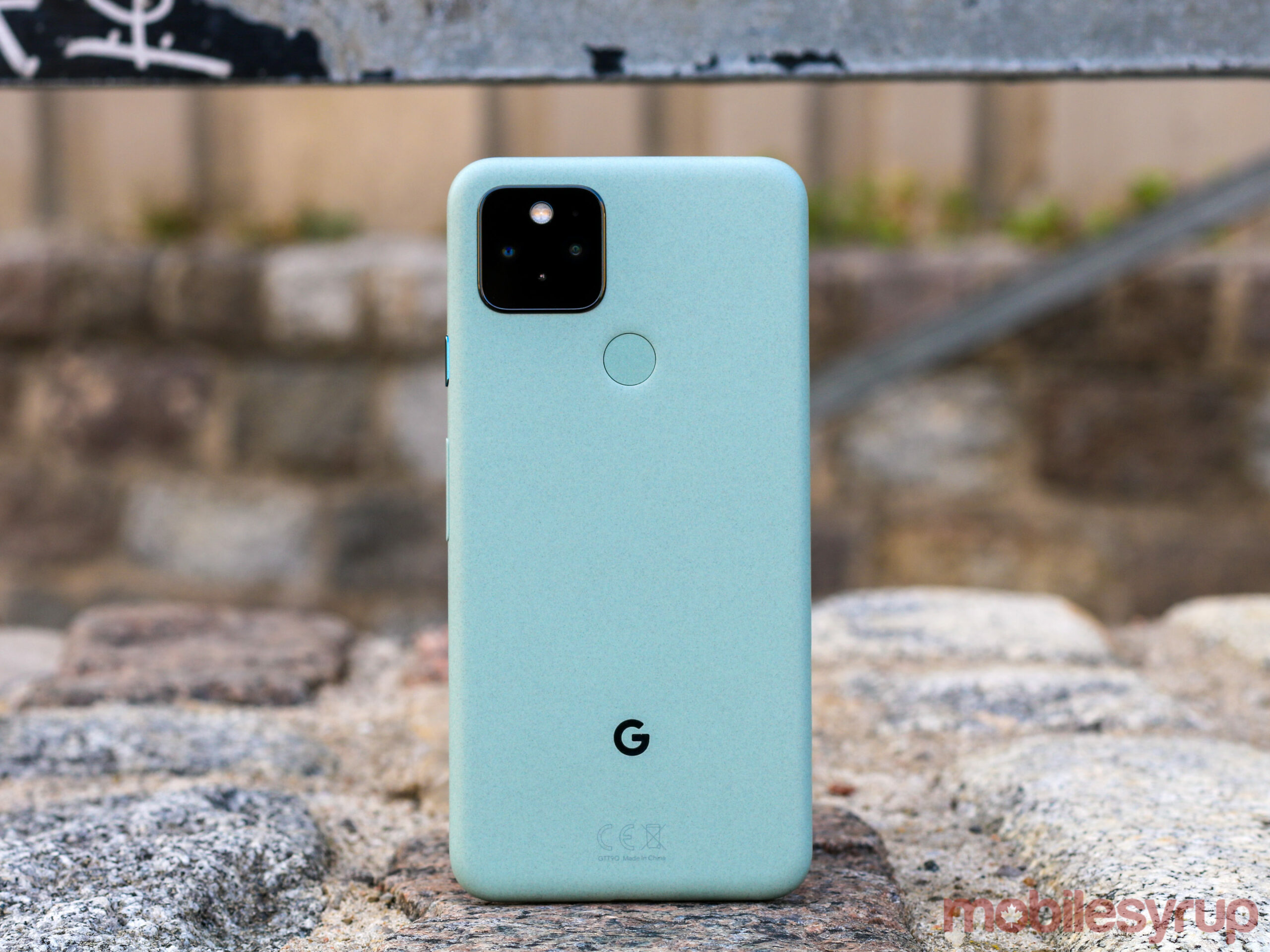 What’s odd about the backing of the smartphone is its rear-facing fingerprint scanner given this is a 2020 flagship smartphone. That said, the sensor’s indent isn’t that deep — which doesn’t impact usability, but how easy the sensor is to find with your finger — but I don’t find this to be much of an issue for me.

The sensor, called Pixel Imprint, is a lot quicker and more accurate than in-screen fingerprint scanners and Google’s Face Unlock. Since I’ve been using the sensor, I’ve had only one instance where it told me to scan again, and that’s after hundreds of unlocks. With this in mind, while it seems odd that the phone uses this older technology compared to an in-screen scanner, it might actually be a plus. 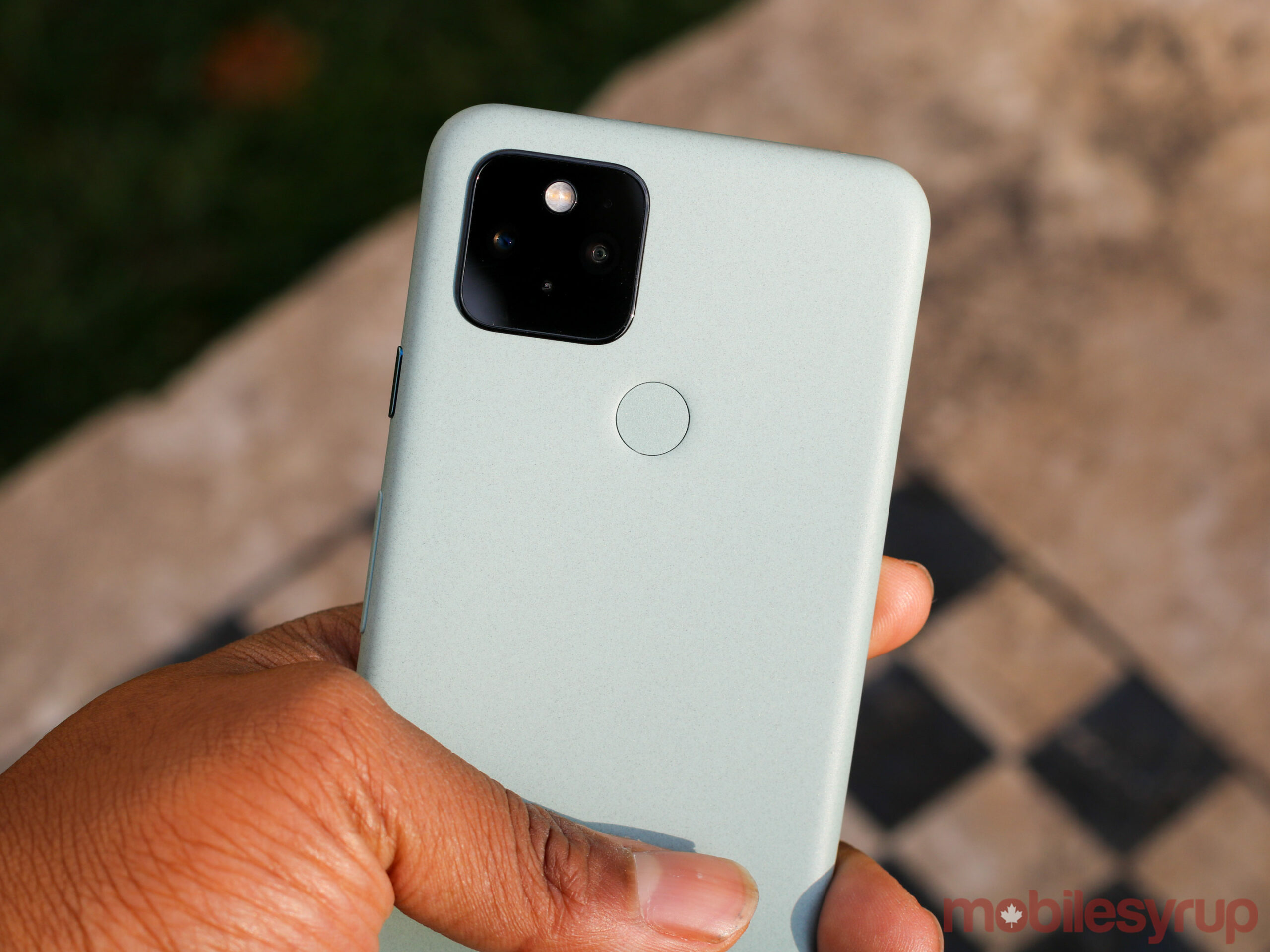 The device’s zoom functionality is exclusively digital because it lacks a telephoto lens, which results in less than stellar, noisy images. I think the handset would have benefited from a telephoto shooter because if you compare it to many of the other flagships on-the-market, it’s not up to par.

Otherwise, the cameras available on the Pixel 5 are pretty good. Pictures are often crisp and clear, whether you’re using the ultrawide or the primary lens. If there’s a lot of detail in the image, like a tree full of leaves, some parts of the image might end up on the sharper side.

Night mode images are accurately exposed, with it being overexposed on some occasions when there’s another light source like a street lamp. Additionally, depending on whether there’s a source of light or not, the pictures can come out noisy.

Similar to previous years, the Pixel 5’s selfies are great.

I’ll need to test out the camera some more and compare it to other devices before making definite conclusions about its abilities, however.

Another similar experience is the phone’s 90Hz refresh rate that feels just like the Pixel 4 series’. The phone could have benefited from a higher refresh rate like what’s available on Samsung’s flagships or the ROG Phone 2, but the last handset I used was Samsung’s Galaxy S20 FE, which featured a 120Hz display, and I didn’t notice much of a change until I held the two phones side-by-side.

So far, so good 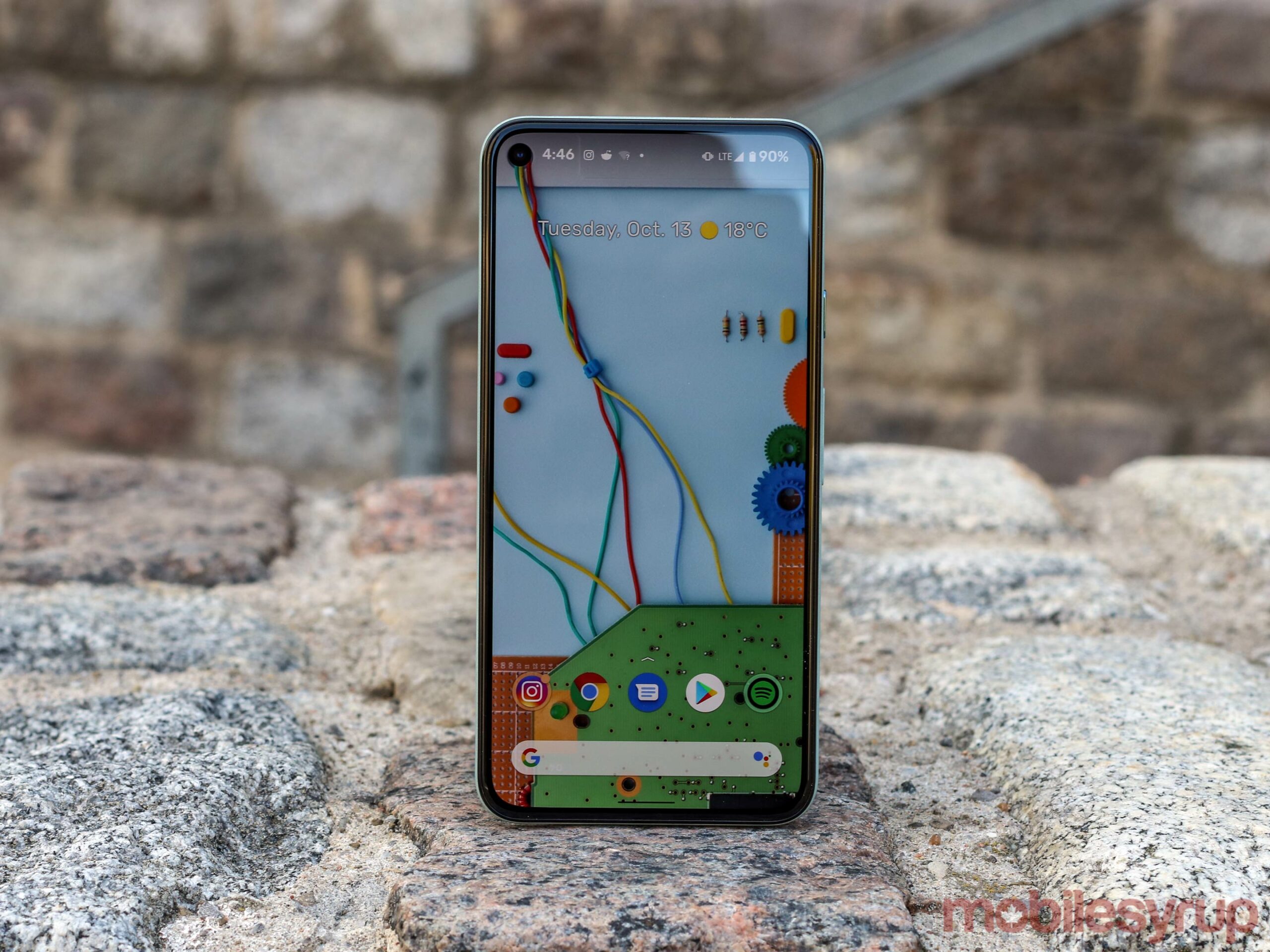 I have a lot more to test out with the Pixel 5. For example, I want to compare the Pixel 5’s pictures with other flagships and see how far I can push the phone’s battery. I also want to test out the handset’s ‘Smart Share’ functionality, which is Google’s branding for reverse-wireless charging.

However, so far, I’ve noted that Google could have benefited from adding a higher refresh rate to the Pixel 5’s display, a telephoto lens and perhaps release the device in at least two size variants.

This year, Google’s smartphone lineup offers the Pixel 4a and 4a 5G, and right now, it’s still unclear to me if it’s worth paying more for the Pixel 5. Still, if you want a device with the essentials alongside a big battery, a smooth screen, metal rear, and a pretty good camera, the Pixel 5 might be a good choice.

Stay tuned to MobileSyrup for a full Pixel 5 review in the coming weeks. The Pixel 5 costs $799 outright in Canada and will release on October 29th. For more on the Pixel 5, check out Jon and I’s editorial that explains how Google’s latest device ushers in a new era of flagships.

OnePlus 8T has an upgraded screen, faster charging and a lower price

Windows 10 refuses to let some users reset their machines – but…

The best outdoor gear for the fall