Get the Hang of Combat, Gadgets, and More

Spider-Man: Miles Morales launches alongside the PlayStation 5 today, and for the most part it’s a fairly similar experience to Insomniac’s first Spider-Man game, although there are a few key differences that may throw you off at first. Of course, there may also be some folks jumping into Miles’ adventure without ever playing the previous game! Whatever camp you fall into, here are a few quick tips to get you web-slinging like a pro in no time…

Make use of your Venom powers

The biggest change you’ll notice when playing Spider-Man: Miles Morales are our titular hero’s new Venom powers. These confusingly-named abilities don’t refer to the Spider-Man villain Venom, so don’t expect to change your appearance or slime enemies with black goo – instead they allow Miles to attack and stun enemies with bioelectric shocks.

If you’re already a veteran of 2018’s Spider-Man, you may be tempted to stick to the techniques you know, but trust me, the Venom powers are powerful and a lot of fun to use. More to the point, you’re going to need to use them to survive, as Miles Morales is really designed around them – enemies come in larger quantities than before and many have shields that require a Venom attack to break. Generate Venom energy by dodging frequently and building up combos against weaker enemies, then take it to the heavier baddies with a well-placed Venom Punch or Venom Smash that stuns all the enemies around you. Stunned enemies take increased damage, so once you’ve hit them with a Venom attack press your advantage and go in for the kill. 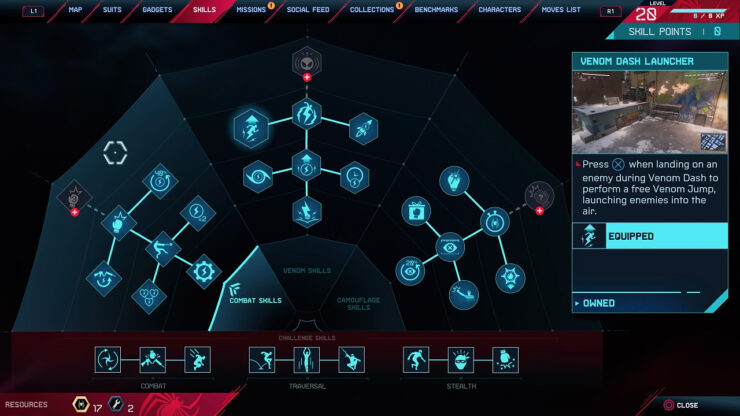 Focus on upgrading your Venom powers in the skill tree

As in the previous game, Spider-Man: Miles Morales allows you to upgrade your abilities via a skill tree, although the branches are different – this time around you can upgrade Venom Skills, Combat Skills, and Camouflage Skills. Despite their names, both the Venom and Combat Skill trees largely focus on your Venom abilities. The Venom tree generally unlocks new moves, while the Combat tree mostly gives you buffs that make Venom attacks more powerful.

Right away, make sure to grab the Venom Smash, Venom Jump, and Synaptic Breakdown skills from the Venom tree, then make sure the grab the Energy Syphon (increased bioelectric power generation), In For a Shock (50 percent more damage on stunned enemies) and Spread the Love (enemies can pass stun to each other) skills from the Combat tree. Once you get those, you’re pretty well set up and can decide where you want to go from there. In my opinion, you can largely ignore the Camouflage tree until later in the game, unless you’re really into stealth.

Hunt down the Challenge skills as quick as you can

Not all of Miles’ new skills are unlocked via the skill tree. Some are unlocked by completing various challenges set up by Miles’ mentor Peter Parker around the map. These challenges unlock some pretty key traversal abilities, including Point-Launch Boost, Quick Zip, and Quick Recovery, as well as some helpful combat skills, including Payback, which lets you instantly takedown ranged enemies after a perfect dodge. Whenever you see one of these challenges pop up, beeline for it, even if it means ignoring the next big story mission for a few minutes. 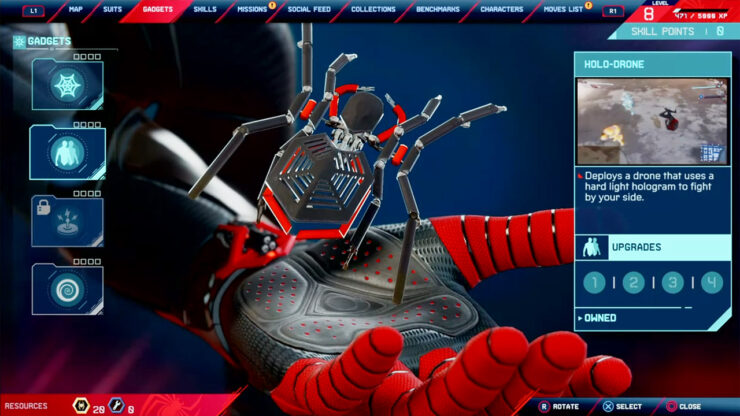 Between his traditional Spidey skills and new Venom powers, Miles has a lot of options for taking down bad guys, but don’t overlook his various gadgets. Some classics return, including your web-shooters and defensive drone, but you also get some new toys, like the Gravity Well that essentially sucks enemies together into a black hole. As in the past, you can upgrade all these gadgets by spending Activity Tokens and Tech Parts earned by doing sidequests. If you’re having trouble with a particular battle, deploying a few gadgets is often the missing key to success. 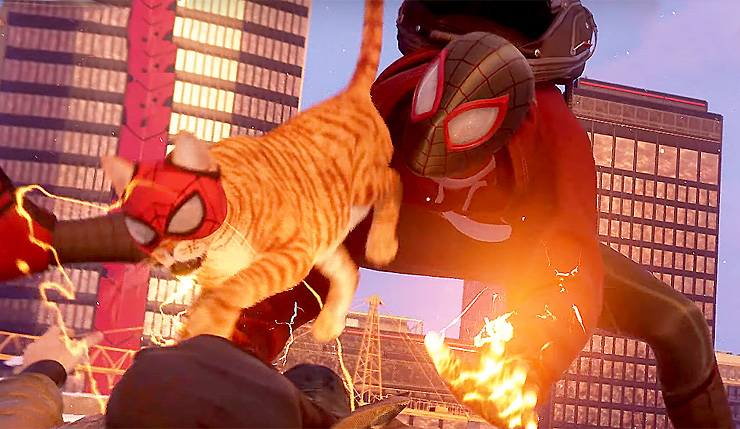 Suit powers are out, mods are in

2018’s Spider-Man had a wide variety of suits, many of which came with their own little perks or powers. That was a fun touch, but some were irritated that they had to wear a certain suit in order to take advantage of a certain useful power. Well, now you don’t have to choose.

Now most suits you unlock come with mods, which can be applied to any suit you want. There are also a number of other mods you can unlock using Activity Tokens and Tech Parts. Eventually, you’ll be able to outfit Miles with four mods – two visor mods and 2 suit mods – and juggling them around can give you an advantage in many missions. If you’re struggling with a section of the game, check out your mods and see if you’ve unlocked anything that might help you. 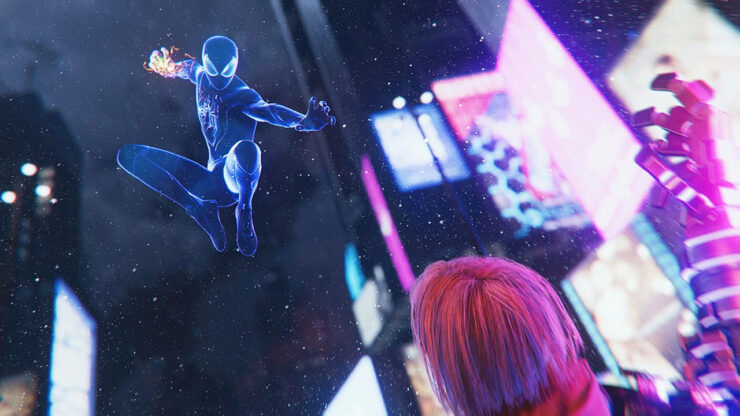 Use stealth…up to a point

I’ll admit, I’m not much of a stealth guy, and I get the feeling most people who play Insomniac’s Spider-Man games aren’t. That said, the option is there, and Miles’ new Camouflage powers do make sneaking more of a viable option. Personally, my approach is to use stealth at the beginning of a combat encounter to take out a few enemies, particularly snipers, and if I’m caught, then I throw down. Even just picking off a quarter of the enemies can make the ensuing fight much more manageable.

This one isn’t so much a real tip, as just advice. The reality is, Spider-Man: Miles Morale’s core story is pretty short. If you focus in strictly on it, you can probably blast through in about five hours. That said, the best way to enjoy this game is to spend plenty of time just messing around between main missions. Really get to know Insomniac’s beautifully remastered New York, pump up Miles’ abilities so fights are properly empowering. Get out and see the neighborhood, Spidey.

Spider-Man: Miles Morales is available now on PS4 and PS5. You can check out Wccftech’s full review of the game, right here.

Some PS5 Consoles Seem to Have Different Fans, One Being Slightly…

Google Chrome Getting Dark Mode Improvements to Deliver a Complete…

This Assassin’s Creed Valhalla Mod Allows You to Customize Eivor

Scotland is testing green hydrogen for cooking and heating in 300…