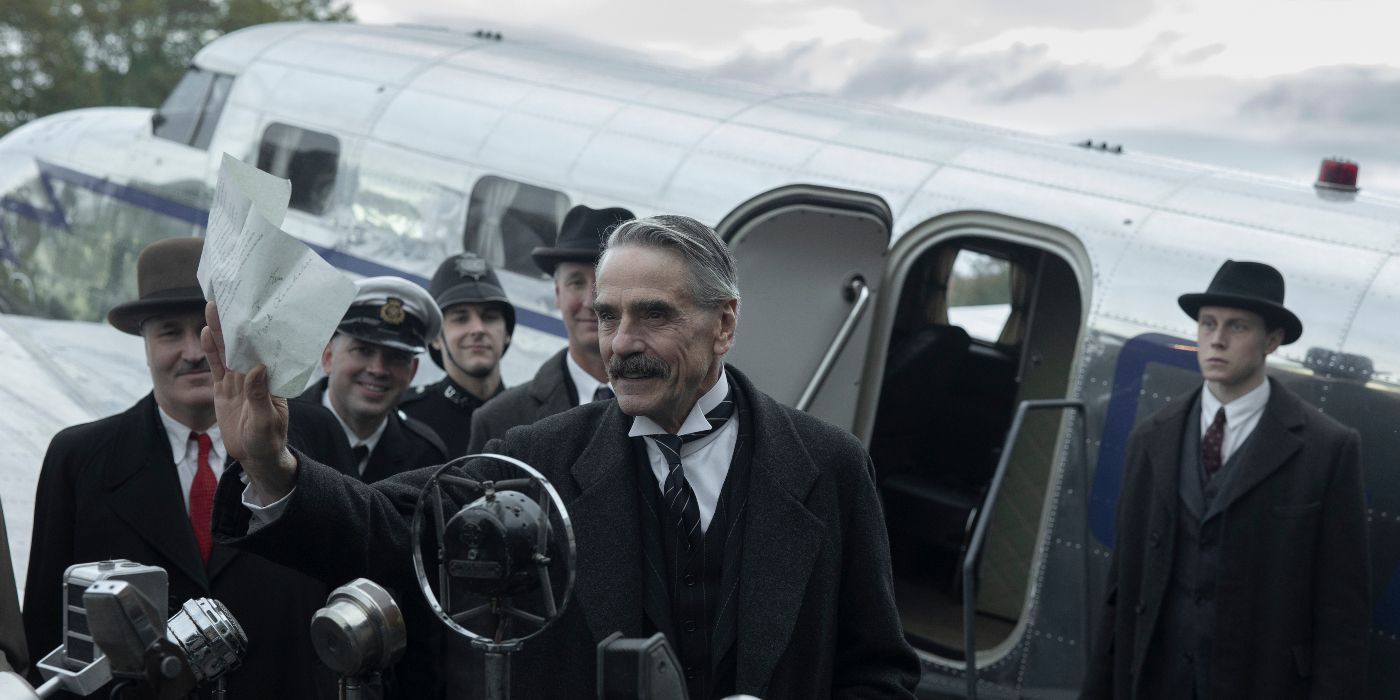 The film had its world premiere this week at the BFI London Film Festival.

If you are looking to see up-and-coming actor George MacKay in something a little less hairy, the upcoming war drama Munich: The Edge of War might be for you. Netflix revealed that their adaptation of Robert Harris’s acclaimed 2017 novel Munich will have a limited theatrical run in January before hitting the platform on January 21, 2022. New images of the film were also released

The British-German coproduction centers around the precipice of World War II, where a British civil servant (MacKay) and a German diplomat (Jannis Niewöhner) are on their way to a conference. While things originally start off normal enough, the two men begin to suspect that something deeper is on the horizon. Jeremy Irons also stars in the film as former Prime Minister Neville Chamberlain.

Christian Schwochow, who has previously directed episodes of The Crown, will helm Munich: The Edge of War. The Hollow Crown scribe Ben Power wrote the screenplay for the adaptation, which is also being produced by Andrew Eaton. The film had its world premiere at the 65th annual BFI London Film Festival on October 13.

Munich: The Edge of War will release in select theaters sometime in January 2022. After this limited theatrical run, the film will be available to stream on Netflix on January 21. Check out more images from the upcoming movie as well as its official synopsis below:

It is Autumn 1938 and Europe stands on the brink of war. Adolf Hitler is preparing to invade Czechoslovakia and Neville Chamberlain’s government desperately seeks a peaceful solution. With the pressure building, Hugh Legat, British civil servant, and Paul von Hartmann, German diplomat, travel to Munich for the emergency Conference. As negotiations begin, the two old friends find themselves at the centre of a web of political subterfuge and very real danger. With the whole world watching, can war be averted and, if so, at what cost?

What lines would you cross to be with your soulmate?

Erin is an entertainment journalist and critic anchored by a life-long obsession with movies. She currently serves up news and hot takes with Collider, with her other bylines including Fangoria, Film Cred, and Screen Queens. In her spare time, she can be seen writing short stories or watching obscure horror movies.

Breath of the Wild Meat & Spear Build Is Surprisingly Effective

The Justice League Need Superman’s Son (But Not…

outlook: Microsoft Outlook is rolling out this…