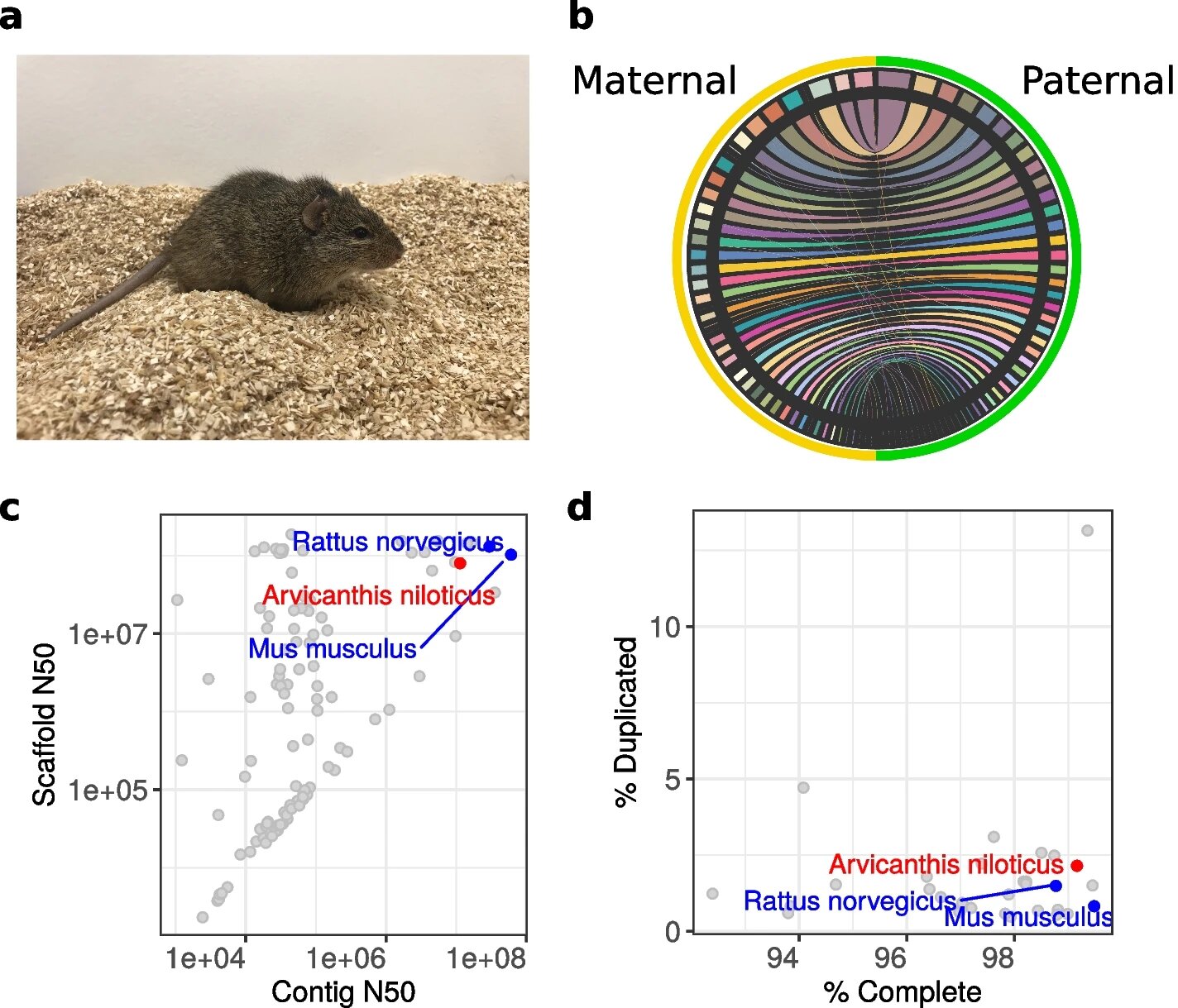 Model organisms are essential for biomedical research and have enabled many important scientific discoveries. The ability to sequence the genomes of these models is a powerful tool to study the genetic factors that impact human health.

The house mouse (Mus musculus) and Norway rat (Rattus norvegicus) are widely used in research due to their genetic similarities to humans. But another rodent is rising through the ranks—Arvicanthis niloticus, the Nile rat.

“We need research tools that will enable us to do the same things with the Nile rat that we are used to doing with the lab mouse,” says Yury Bukhman, a computational biologist in the Stewart Computational Biology Group at Morgridge and senior author on the project. “Having the reference genome is an advance toward that goal.”

In particular, the Nile rat serves as an alternative model in two research areas where lab mice and rats have limitations —type 2 diabetes and disorders associated with a disrupted circadian rhythm.

Mice and rats are nocturnal animals, and so they are less useful at modeling human circadian cycles. Additionally, they can develop pre-diabetes symptoms with a high-fat diet, but they rarely develop long-term diabetic complications like humans with the disease.

“You can alter their genetics, you can give them exaggerated amounts of fat, or use chemicals to accelerate the process. But that’s a lot of additional confounding factors that you are pushing into the animal model to get what you want,” says Huishi Toh, an assistant project scientist at the University of California Santa Barbara who worked with Jamie Thomson, emeritus director of regenerative biology at Morgridge and professor at UCSB.

The Nile rat is diurnal, active during the daytime like humans. It also has more photoreceptors in its eye in comparison to nocturnal rodents, which makes it relevant for studying human retinal disease—including diabetic retinopathy.

“There is still room for a lot of discovery in type 2 diabetes, with questions that are difficult to answer. That’s why we thought that maybe it’s time to take a risk on a newer animal model,” Toh says. “Does it mean it’s more accurate or that you can replace other models? No, of course not. But you can find different information that can be useful, too.”

Another benefit of the Nile rat is that it serves as an outbred model, meaning its genetics are reflective of a diverse population. Many laboratory mice strains have been inbred for generations, creating stable populations that are nearly genetically identical. This is useful for reducing experimental variability, but less useful when studying the complex genetic factors contributing to disease.

“We also know that epigenetics is really important—the environment crossing with the genetic components—so we have to study both. That’s why we require a very high-quality genome to allow the ability to do that,” says Toh.

The Nile rat genome is a product of a large international collaboration involving the Vertebrate Genomes Project, a consortium of researchers aiming to assemble reference-quality genomes of all vertebrate species.

The technology to produce a complete and highly accurate genome sequence is relatively new. Typically, to sequence a large genome, the DNA sequence needs to be chopped into shorter lengths between 100-300 nucleotides and then reassembled into longer contiguous sequences (contigs). But this approach tends to leave lots of gaps.

“An important genome quality measure is what’s the length of an average contig. Basically, the longer it is, the fewer gaps you have,” says Bukhman. “Ours is one of the longest.”

The research team applied long-read sequencing technology to assemble longer contigs from reads of around 10,000 to 20,000 nucleotides in length. They also used multiple additional technologies to join contigs together into scaffolds that run the length of a chromosome. Finally, they were able to fully resolve two copies of the genome—the one that the sequenced individual inherited from its mother and the one from its father.

“These technologies are developing very fast,” Bukhman says. “I think the holy grail would be to just be able to sequence a whole chromosome and do it accurately. However, that hasn’t happened yet.”

Another measure is looking at the completeness of the genome. The team analyzed their Nile rat sequence through a database called BUSCO (benchmarking universal single copy orthologs), which provides a set of genes commonly found in the phylogenetic group of interest, in this case rodents.

“We’re basically in the same league as the other rodent model organisms,” says Bukhman. “We find complete sequences of 99% of BUSCO genes, so we’re not missing a lot of protein coding sequence.”

With a high-quality sequence in hand, the researchers looked for patterns in the genome, such as genes that have different number of copies in Nile rat compared to house mouse, that could be candidates for future study.

“We don’t have a ‘smoking gun’ at this point,” says Bukhman. “You can always get a list of genes. But then, how do you know that they’re really important in diabetes? That will take years and years of experimental work.”

Now that the Nile rat has a high-quality reference genome, Bukhman and Toh both hope that the species will become more widely used in biomedical research.

“People are resistant to using new animal models, because it’s a lot of money, a lot of effort, and a lot of risk,” says Toh. “But we decided to take the unconventional route. In research, I think, to survive is to find different flavors, different trajectories. And we’ve removed some of that risk.”

Provided by
Morgridge Institute for Research

WhatsApp starts testing message to self feature in beta