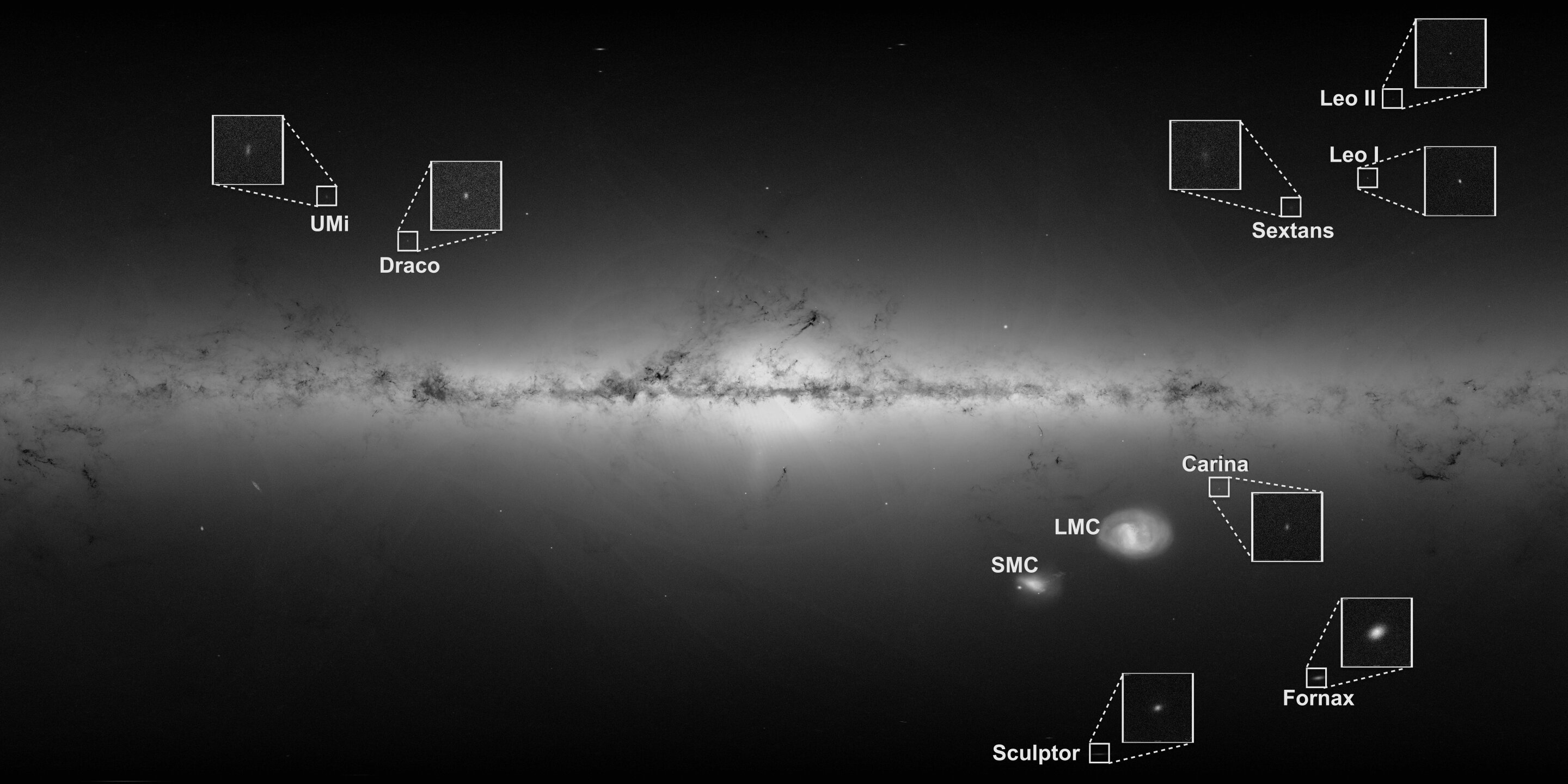 Data from ESA’s Gaia mission is re-writing the history of our galaxy, the Milky Way. What had traditionally been thought of as satellite galaxies to the Milky Way are now revealed to be mostly newcomers to our galactic environment.

A dwarf galaxy is a collection of between thousand and several billion stars. For decades it has been widely believed that the dwarf galaxies that surround the Milky Way are satellites, meaning that they are caught in orbit around our galaxy, and have been our constant companions for many billions of years. Now the motions of these dwarf galaxies have been computed with unprecedented precision thanks to data from Gaia’s early third data release and the results are surprising.

François Hammer, Observatoire de Paris—Université Paris Sciences et Lettres, France, and colleagues from across Europe and China, used the Gaia data to calculate the movements of 40 dwarf galaxies around the Milky Way. They did this by computing a set of quantities known as the three-dimensional velocities for each galaxy, and then using those to calculate the galaxy’s orbital energy and the angular (rotational) momentum.

They found that these galaxies are moving much faster than the giant stars and star clusters that are known to be orbiting the Milky Way. So fast, that they couldn’t be in orbit yet around the Milky Way, where interactions with our galaxy and its contents would have sapped their orbital energy and angular momentum.

Our galaxy has cannibalized a number of dwarf galaxies in its past. For example, 8-10 billion years ago, a dwarf galaxy called Gaia-Enceladus was absorbed by the Milky Way. Its stars can be identified in Gaia data because of the eccentric orbits and range of energies they possess.

More recently, 4-5 billion years ago, the Sagittarius dwarf galaxy was captured by the Milky Way and is currently in the process of being pulled to pieces and assimilated. The energy of its stars is higher than those of Gaia-Enceladus, indicating the shorter time that they have been subject to the Milky Way’s influence.

The discovery mirrors one made about the Large Magellanic Cloud (LMC), a larger dwarf galaxy so close to the Milky Way that it is visible as a smudge of light in the night sky from the southern hemisphere. The LMC was also thought to be a satellite galaxy of the Milky Way until the 2000s, when astronomers measured its velocity and found that it was traveling too fast to be gravitationally bound. Instead of a companion, LMC is visiting for the first time. Now we know that the same is true for most of the dwarf galaxies too.

So will these newcomers settle into orbit or simply pass us by? “Some of them will be captured by the Milky Way and will become satellites,” says François.

But saying exactly which ones is difficult because it depends on the exact mass of the Milky Way, and that is a quantity that is difficult for astronomers to calculate with any real accuracy. Estimates vary by a factor of two.

As a dwarf galaxy orbits, the Milky Way’s gravitational pull will try to wrench it apart. In physics this is known as a tidal force. “The Milky Way is a big galaxy, so its tidal force is simply gigantic and it’s very easy to destroy a dwarf galaxy after maybe one or two passages,” says François.

In other words, becoming a companion to the Milky Way is a death sentence for dwarf galaxies. The only thing that could resist our galaxy’s destructive grip is if the dwarf had a significant quantity of dark matter. Dark matter is the mysterious substance that astronomers think exists in the universe to provide the extra gravity to hold individual galaxies together.

And so, in the traditional view that the Milky Way’s dwarfs were satellite galaxies that had been in orbit for many billions of years, it was assumed that they must be dominated by dark matter to balance the Milky Way’s tidal force and keep them intact. The fact that Gaia has revealed that most of the dwarf galaxies are circling the Milky Way for the first time means that they do not necessarily need to include any dark matter at all, and we must re-assess whether these systems are in balance or rather in the process of destruction.

“Thanks in large part to Gaia, it is now obvious that the history of the Milky Way is far more storied than astronomers had previously understood. By investigating these tantalizing clues, we hope to further tease out the fascinating chapters in our galaxy’s past,” says Timo Prusti, Gaia Project Scientist, ESA.

Citation:
Gaia reveals that most Milky Way companion galaxies are newcomers to our corner of space (2021, November 25)
retrieved 25 November 2021
from https://phys.org/news/2021-11-gaia-reveals-milky-companion-galaxies.html

AMC Plus: Price, platforms, and more for the AMC Networks streaming service

Researcher outlines how whales’ sensory systems have evolved through imaging…