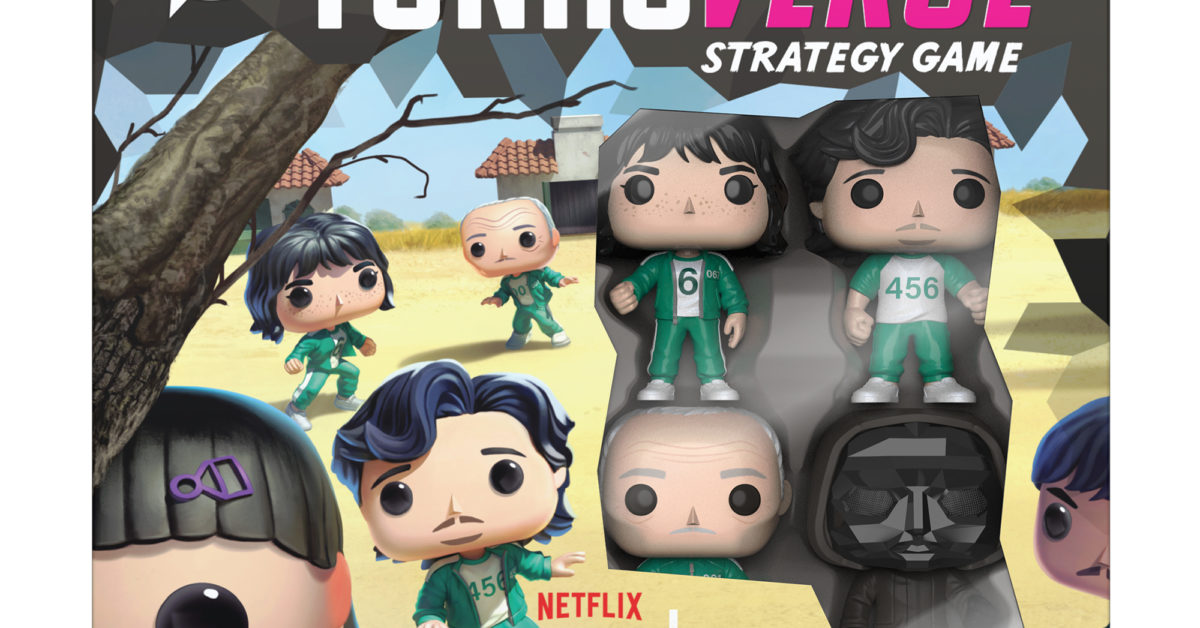 Funko Games unveiled their full line of Halloween games on the way, including new titles for Squid Game and Fight Nights At Freddy’s.  The reveal came at GenCon, and while they did have a couple of titles that were already out from Disney, they showed off a new card game focused on the new Hocus Pocus 2 film, as well as an adaptation of the horror PC game, and the Netflix series. We have the details of all of them for you below, along with images of all the new entries.

Five Nights at Freddy’s: Night of Frights: Play as the iconic animatronics from Freddy Fazbear’s Pizza! When the lights go out, it’s time for frights! Compete to scare the daylights out of the unsuspecting security guards that patrol the pizzeria after dark! Play cards to set traps, sneak down the hall, and hide in the shadows! It’s a race to see which of you can frighten the guards at the perfect moment to capture them! At the end of five nights, the animatronic that has successfully captured the most guards wins! (Ages 8+, $24.99 MSRP, 2-4 Players, Available Fall 2022)

Funkoverse: Squid Game 100 (4-Pack): Face off in the ultimate Pop! battle! Combine your favorite characters and go head-to-head in four exciting game scenarios. Two of the scenarios are unique to this game: Race to the finish line in Red Light, Green Light, or try to burst past your rivals’ defenses in The Squid Game! Move through memorable locations–the Barracks or the Courtyard–and use your characters’ unique abilities to capture points and achieve victory! (Ages 17+, $39.99 MSRP, 2-4 players, Available Fall 2022)

Funkoverse: Squid Game 101 (1-Pack Expansion): Lord your power over the other Squid Game players as the Masked Manager, and investigate the games themselves as the undercover detective Jun-ho. Two characters in one! Includes two character cards with unique abilities so you can play as the faceless Masked Manager, or remove the mask and play as the undercover detective Jun-ho! Combine this game with any other Funkoverse Strategy Games to maximize your fun! (Ages 17+, $14.99 MSRP, Expansion, Available Fall 2022)

Disney Hocus Pocus Tricks & Wits Card Game: The Sanderson Sisters have risen again, and only Max, Dani, and Allison can stop them! Split into two teams—Kids versus Witches—and work together to outsmart your opponents with clever card play. Get the ghastly spellbook before the black flame candle burns out to win! (MSRP: $8.99, 2-4 players, Ages 8+, Available for Pre-Order)

Disney Return of the Headless Horseman Game: After midnight in Sleepy Hollow, the town comes to life with spooky sounds and creepy creatures! Ichabod is frightened and needs your help! Work together to get him to the covered bridge before the Headless Horseman heads him off! It’s a family game of frightful fun! (MSRP: $19.99, 2-4 players, Ages 6+, Available Now)

Disney Haunted Mansion – Call of the Spirits Game: Disney’s beloved The Haunted Mansion comes to life—err, death—in this hauntingly fun family board game! Explore all the classic rooms of the ghost-infested manor, from the festivities-filled Ballroom to the Attic and out to the Graveyard and beyond in search of spirits. Beware, though, of the Hitchhiking Ghosts, who are notorious for “following you home” as that may spell your doom in the end! Two different versions of the game allow players to choose whether they want to explore the Haunted Mansion at Disneyland or Magic Kingdom. (MSRP: $24.99, 2-6 players, Ages 8+, Available Now)

Rewind is a remake of a classic roguelike puzzler