Fish passes can reconnect species with habitats blocked by dams. Here’s how they work 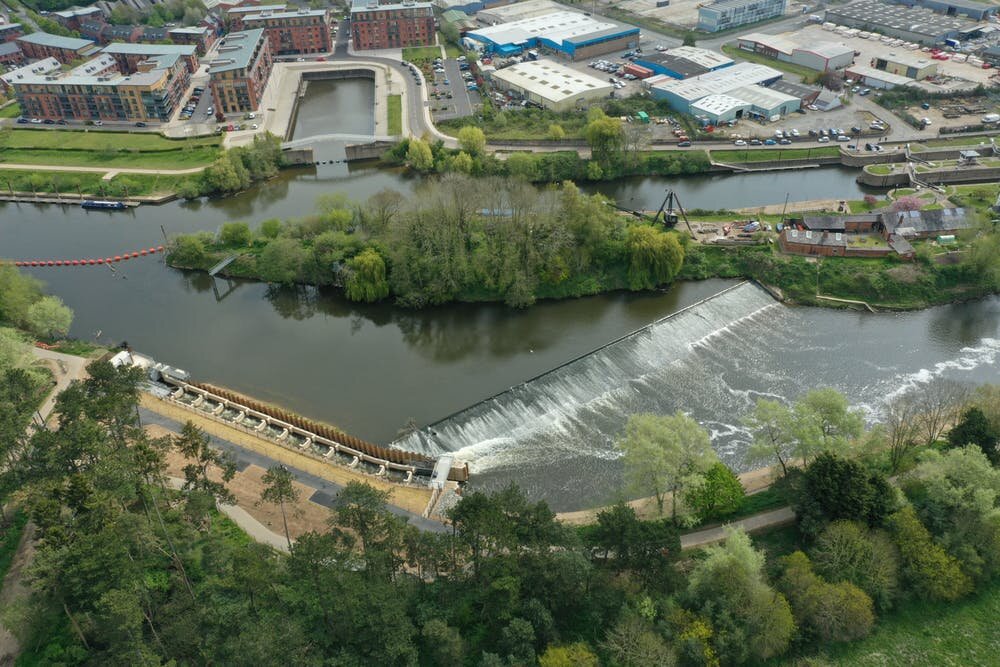 Over 1 million dams and culverts (tunnels that encircle rivers passing under roads) block the movements of fish and other wildlife in Europe. Scientists estimate that less than 1% of catchments in the U.K. are free of obstruction. A report released in 2020 showed the effect this trend is having worldwide: a more than 75% decline in the abundance of 247 migratory fish species globally since 1970.

Brown trout, for example, must swim upriver into streams to spawn. Adult European eels meanwhile need to make their way downriver and out to sea to do the same. Even small dams like weirs that are a meter tall can prevent fish from swimming upstream because they are higher than most fish can jump.

Suitable spawning areas aren’t found everywhere in a river: every fish species has its own needs. If a dam prohibits fish from reaching those habitats, the shortfall in offspring can cause populations to decline. Species living on the edge of suitable habitats are more vulnerable to droughts and pollution and are therefore at greater risk of extinction.

One solution is to remove dams. The EU plans to reconnect at least 25,000km of river across the continent by 2030, restoring the pathways migratory fish take to reproduce or feed. Completely removing a dam isn’t always possible, though, particularly where they are still used to help boats navigate. Instead, fish passes—also called fishways or ladders—can be built alongside dams to help fish swim up and around. So how do fish passes work—and what can they do to help river ecosystems recover?

The River Severn is the U.K.’s longest. Like the Mississippi in the U.S., the Severn has a lock and dam system on its main stem. This was built in the mid-19th century to help barges move from one section of the river to another, and is still used today. Dams raise the water level behind them and locks (giant gates) open and close to raise boats up and over.

Damming caused populations of Twaite shad—a silvery, herring-like fish which must move up and down the Severn to feed, grow and reproduce—to crash almost overnight. Today, it remains one of the country’s rarest species.

The Severn Rivers Trust and partners set out to help the Twaite shad reach its historical spawning habitat upriver. Scientists tracked the fish returning to the Severn from the sea to spawn and found that the Diglis weir near Worcester was blocking their passage. Just months after the largest fish pass in England opened in May 2021, Twaite shad were recorded making their way upstream and beyond the locks and dams for the first time in over a century.

Fish passes come in different designs and sizes, but all are supposed to allow fish to ascend rivers through lower gradient channels or smaller steps around the side of a dam they cannot swim or jump over. Fish swimming upriver must find a narrow entrance to the pass, and the water flowing out of it is often the clue they need. Just like the river, water flows from upstream to downstream in a fish pass. If the flow is too gentle for most fish to notice or it’s too fast or turbulent for them to swim up it, the pass will either be used by some species or none at all.

Fish passes tend to have small, subdivided sections that act as areas for fish to rest during their journey too. The incline, the number of resting places and the flow of water both inside and at the entrance are all important for determining whether fish use the pass and if they can make it upriver.

The fish pass at Diglis weir was designed for Twaite shad, which are not strong swimmers or leapers. A fish pass that this species can traverse will probably allow fish of various sizes and swimming abilities to make their way upriver too. Not all fish passes are designed to accommodate weaker swimmers, however. Globally, fish passes have largely been built to benefit a single species or group, particularly those that are economically important, like salmon.

To begin to reverse the plunge in migratory fish populations, countries should build fish passes and remove dams in ways which benefit the greatest number of species. This will require governments establishing appropriate design standards and making it a national priority to reconnect their many disjointed rivers.

Citation:
Fish passes can reconnect species with habitats blocked by dams. Here’s how they work (2022, August 3)
retrieved 3 August 2022
from https://phys.org/news/2022-08-fish-reconnect-species-habitats-blocked.html

Jake Gyllenhaal to Star in Prime Video Reboot, Others Cast