Square-Enix’s remaster output across the current generation of consoles has delved into some deeper cuts from the Japanese juggernaut’s back catalog. We recently saw the likes of Final Fantasy VIII getting a pretty novel rework and one of the Chocobo’s Mysterious Dungeon titles that was overlooked on the Nintendo Wii was given new life on modern platforms. The first Crystal Chronicles title, a flagship for the Nintendo GameCube and the GBA Link Cable, is now more than 17 years old and prime for the full Crystal Chronicles Remastered treatment. Has Square-Enix done well carrying to the chalice into a new generation of consoles, or should this caravan have been left in the miasma?

Final Fantasy Crystal Chronicles Remastered takes place in a world coated by toxic miasma, save for a few towns protected by the light of a magical crystal. These crystals run off of a sort of tree sap known as Myrrh and without it, would no longer shine its protective light and allow its residents to succumb to the fatal miasma. The problem is, every year, these crystals need to be recharged, thus a small caravan of adventurers need to set out to collect Myrrh so that their hometown can survive for another calendar cycle.

Players are given the opportunity to create themselves as a male or female resident of one of four tribes, each with their own equipment affinity and proficiencies in attacks and magic. They can also choose the trade and career that their family specializes in, building their hometown up with a family shop that can provide unique bonuses. This was a feature that was a huge boon in the GameCube release, as you could visit other players’ towns and pick up items you otherwise would’ve missed. Sadly, that feature is missing in the Remastered release, with players only able to visit their own hometown and the families of the characters they’ve personally created. 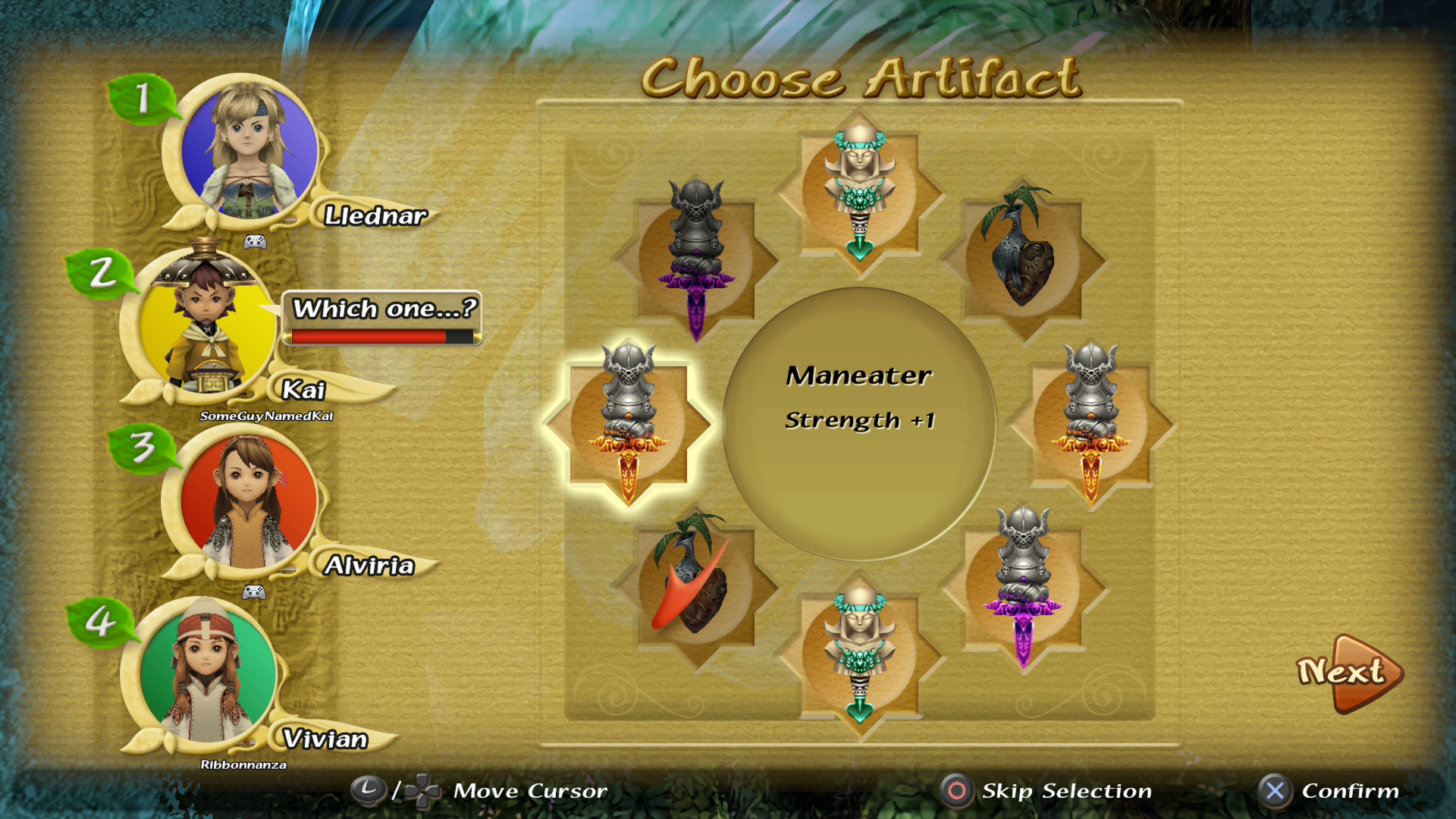 That missing feature is only a symptom of a growing trend of content that escaped the final cut of Final Fantasy Crystal Chronicles Remastered. Most noticeable of all is the inability to venture out with fellow adventurers on the same screen, or I should say a lack of local co-op. Crystal Chronicles Remastered’s main focus is on the online play modes which sadly aren’t implemented all too well.

The hunt for Myrrh is your caravan’s main objective in Final Fantasy Crystal Chronicles Remastered, so exploring dungeons to collect this vital essence should be easy, right? Not so much. When delving into one of the game’s core dozen-plus dungeons, only the lobby host gets credit for the Myrrh collection, leaving the other party members without being able to progress their own story. If players want to get credit, they’ll have to instead host their own lobby and invite players into it or leave it up to fate with random matchmaking. 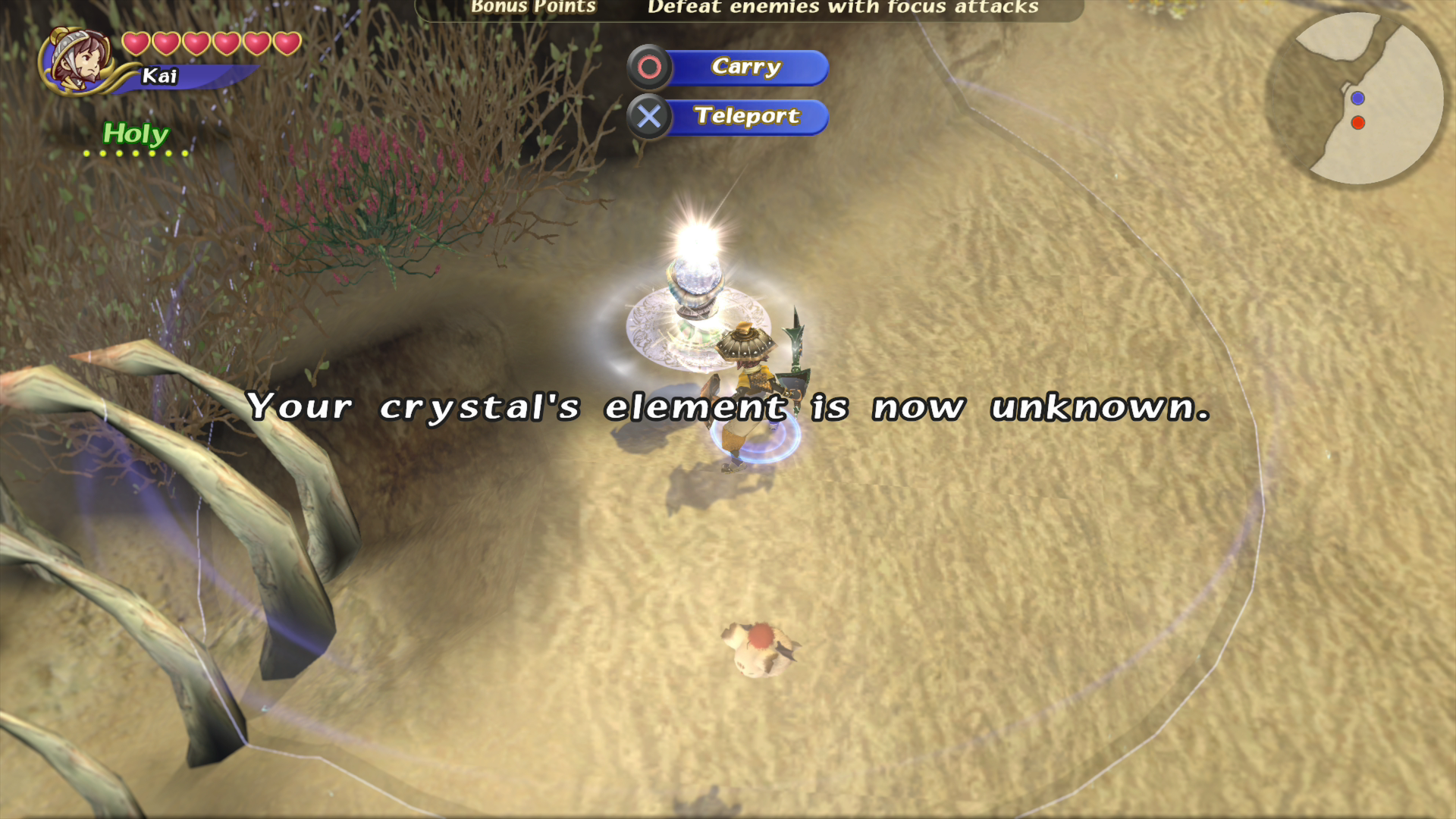 There are a lot of modern conveniences to online play that are sadly missing from Final Fantasy Crystal Chronicles Remastered. If you want to play with a core group of friends, you’ll need to make a new lobby after every dungeon and invite them in, with no option to venture on into another dungeon as the same team. With the list of available dungeons tied to the player’s story progression, this leaves a lot of replaying the same dungeons repeatedly in order to advance the calendar year and expand the caravan’s outreach. There’s no lobby system, option to choose which cycle of a dungeon you’d like to play, or many other forms of matchmaking that would make trying to group up with fellow adventurers anything less than an exercise in extreme patience.

The story to Final Fantasy Crystal Chronicles is told non-traditionally through letters exchanged with family members or the odd random event as your caravan traverses the over world map. There’s a jumbled assortment of plot lines of fellow adventurers throughout the world that slowly piece together life within the miasma and leads to a crucial clue as to how to reach the final dungeon of the base game. 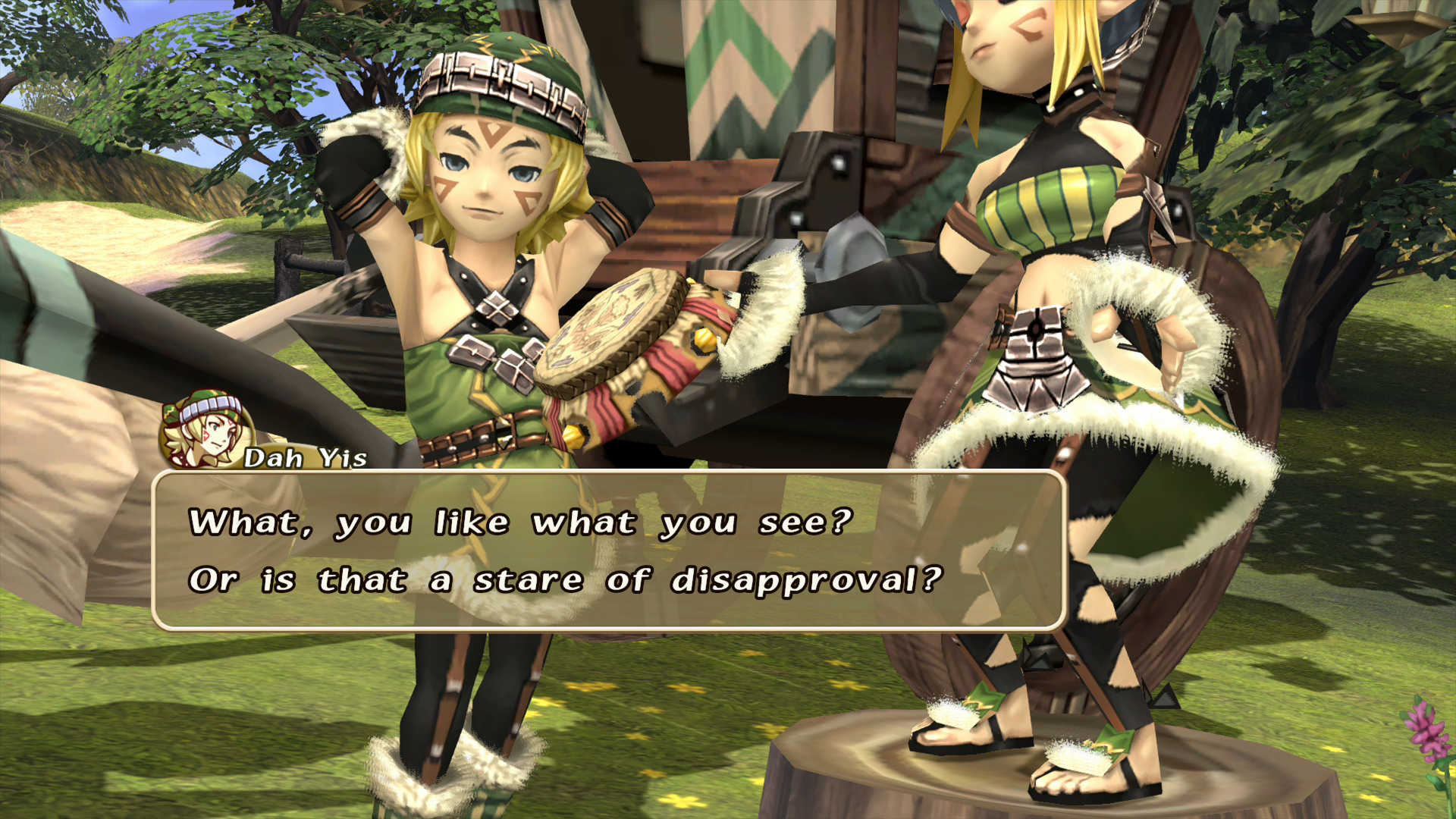 Traversing the miasma successfully requires the use of a Myrrh-bearing chalice to be carried out in every adventure. In gameplay terms, this chalice provides the only safe space to travel through dungeons and with its limited range of effectiveness will have to be carried around by someone on the team. When playing solo, you’ll have a moogle companion that can carry the chalice for you (who often complains and asks the player to switch out with them). Since carrying the chalice and walking around is all that character can do at a given time, that means they can’t take part in combat or pick up items. Dropping the chalice just to take out one or two foes and their loot is a common occurrence in Final Fantasy Crystal Chronicles and someone is always tasked with that chore. In multiplayer, there is no moogle to assist, so one of the party of four is often stuck with this mundane task while everyone runs around killing and looting (you could drop the chalice, but most fights are over before you can draw your weapon and get an attack or two in).

Combat in Final Fantasy Crystal Chronicles Remastered felt dated even back in 2003 and there’s little redeeming quality to it in 2020. Characters are limited to a simple three hit combo at best and their other commands come from picking up magicite that’s exclusive to that dungeon or consumable items scattered throughout. There’s a stiffness to the combat and no amount of dodging or blocking can help break that sensation of trying to cut your way through molasses. Even the simple task of trying to switch from attacking just once and switching the command to blocking to intercept an enemy attack feels like it takes forever and enemies will rarely give the player respite to plan their next moves. For a real-time combat system, trying to play through the game solo is nothing less than an exercise of patience and I couldn’t recommend it to players looking to venture out solo. 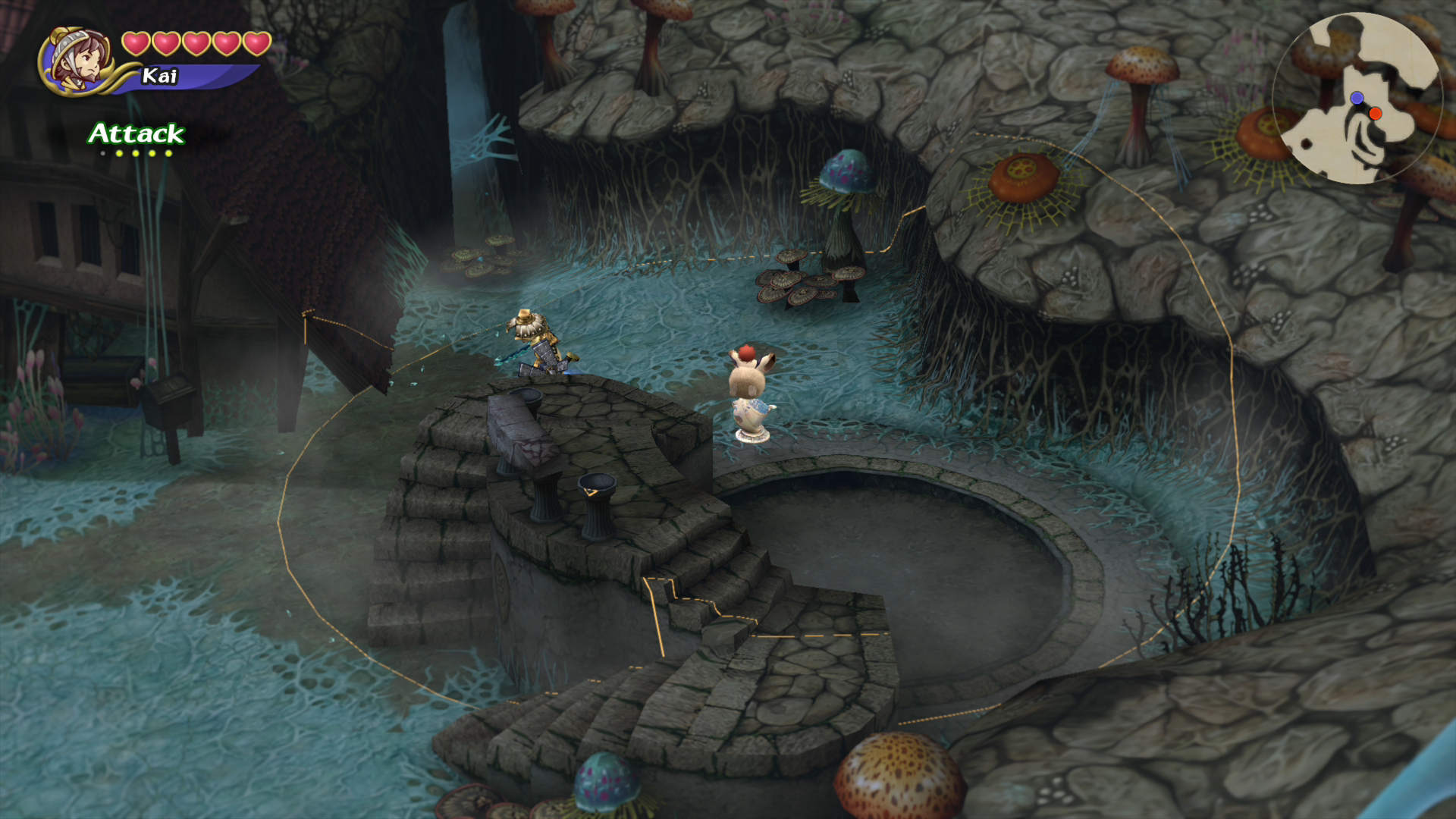 Enemies are insanely predictable and perform their attacks on invisible timers. When fighting one-versus-one, it can be easy to run to the side of an enemy and give them a retaliatory strike before backing off and continuing the cycle until they’re dead. However, when facing multiple enemies that aren’t quite in sync, be prepared to eat a continual cycle of strikes that often lead to the player’s swift demise (unless they happen to have a Phoenix Down equipped). The final boss fight is notoriously bad for this, with two peon enemies that can deal up to two hearts of damage in a single swing with little room to dodge away. If they’re running out of sync with one another, they can continue to strike the player without giving them a chance to cast a crucial Cure spell or even open the menu to eat some food. This gets even worse when facing an enemy that can freeze the player in place or cast Stop, leaving the player vulnerable to a few seconds of attacks with no method of healing.

New to Final Fantasy Crystal Chronicles Remastered are two new features that most players won’t get to play around with until beating the game. The first is a Mimic system that lets players unlock certain tasks and rewards them with being able to shapeshift into certain story NPCs instead of the basic four skins for their given race. This is expanded upon with a plethora of paid DLC that’s available for purchase for $4/character. Unfortunately, this transformation system only works in dungeons and players will see their original selves during visits to towns and story cutscenes. The others are a number of postgame dungeons that double the number of playable destinations but most are simply rescinded versions of the existing attractions.

Final Fantasy Crystal Chronicles Remastered is a relic of another era, where online multiplayer was an optional bonus rather than the main draw. With local co-op stripped away for a questionable online lobby system, one has to wonder about the missteps in development that made this recent remaster lose its charm. If you’re still keen on taking this adventurous journey on yourself, you might be better off playing this one solo.

Final Fantasy Crystal Chronicles Remastered is certainly prettier than the GameCube release, but with a definitive lack of local co-op and some bafflingly poor online multiplayer choices, that’s about all this remastered classic has going for it.