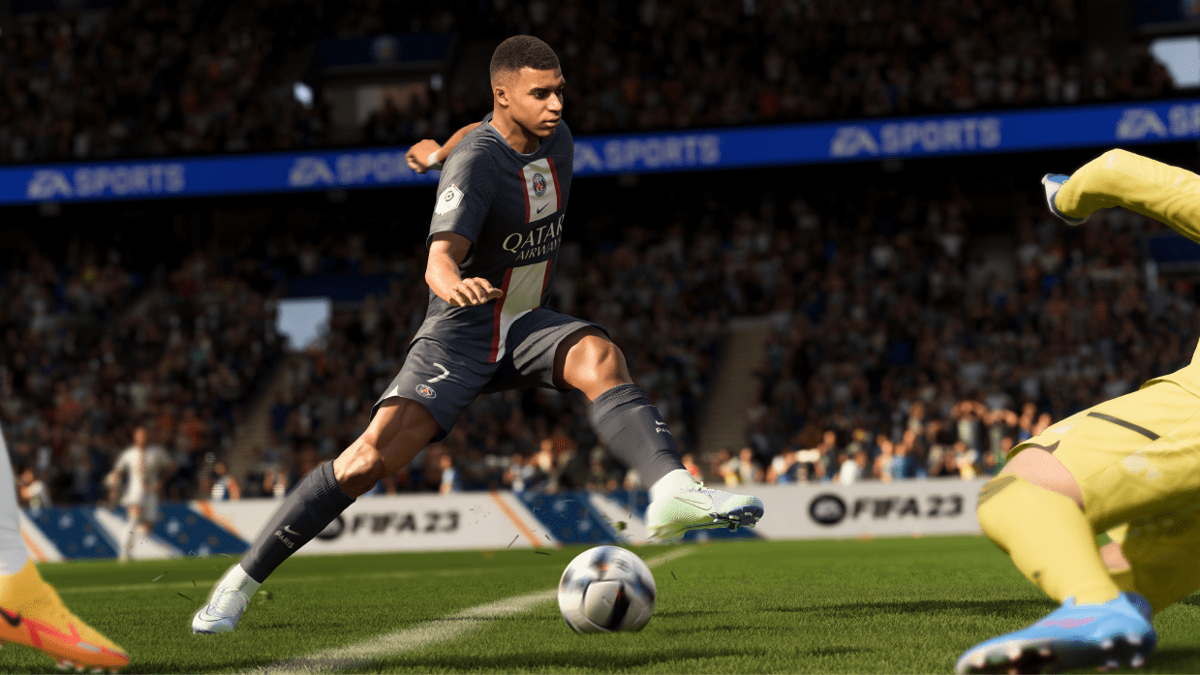 The time has arrived to check out everybody’s favourite football simulation title. FIFA is a series that has blown all of its competition out of the water over the years. PES turned into eFootball but still couldn’t hold a candle to FIFA’s power. What’s unfortunate is that this is EA’s last take at FIFA, after FIFA 23 all titles will be named EA Sports FC. It is the end of an era and EA wanted the last one to be special, so they went all out.
Players should know that I reviewed this title on the PlayStation 5, there were no additional settings involved in the game. When getting into game, at first glance, it felt new and old at the same time. Many of the old features and animations have been carried over, but there is definitely a lot of new stuff to check out too.

First and foremost, the constant argument about FIFA being the same year after year has been defeated this time around. The gameplay definitely feels changed, with the fluidity being enhanced. EA concentrated on realism this time around, and man have they delivered. The game now feels true to life with accurate ball and player physics.

It feels that the game has slowed down, which is not necessarily a bad thing, just a learning curve that players will have to get through. Getting around defenders is just not dependent on pace anymore, a lot of technical skill will be required to get those goals in. You could rely on the same techniques if you’ve got players like Mbappe on your squad, but overall it feels that EA has nerfed the pace of the attackers and buffed it for the defenders.

Powershot, you just cannot explain the fun this feature has brought to the title, and players will just have to experience it first-hand to know what it really feels like. As EA said, it is a high risk as well as a high reward feature in the new game. If you manage to get the direction, timing and power right, you will get to experience a world-class screamer. It is one of the most gratifying experiences in the game, and players will see everyone trying to pull off this type of goal in almost every match. Check out some of my Power Shot attempts in FIFA 23 below:

We come to dribbling, this is where the game mostly feels old and new at the same time. The dribbling has essentially not changed much, barring the new player-exclusive animations. The new player-specific animations with dribbling are a sight to behold, you will observe it is way easier to get the ball past the defence by using Neymar or Bernardo Silva when compared to others. Off-ball play and running also have different sets of animations, which provides a sense of authenticity to the players.

Defending, this has been buffed so much, I just cannot comprehend it. Gone are the days when players had massive score lines to boast about. This is definitely one of the most changed parts of gameplay. The top-notch defenders have now transcended into literal walls, and players will face high difficulty trying to get the ball past the likes of Van Dijk or Koulibaly. Defenders are also able to get the ball away doing some back heel moves if they miss it the first time around. Bottom line, if you were a decent defender in FIFA 22, you are a great defender in FIFA 23, if you were a great defender in FIFA 22, then you have now transcended into a world-class defender. Due to this buff, players will experience matches with less amount of goals and will also manage to get those clean sheets in.

Dual Sense has its advantages, but not as many as you would expect. The haptic feedback is almost the same as the previous gen, with a few tweaks here and there. One of the most noticeable additions would be the incorporation of the speaker on the controller. Players will now hear the sound of the ball smashing against the net, the cheering of the crowd and even the thud when releasing a power shot through the speaker on the controller. This definitely adds more immersion to the game. Adaptive triggers have close to no use in this game, you might feel a bit of resistance when the player’s stamina is low but other than that there is no use of the triggers.

Set Pieces are the best addition to the game, as they have been completely revamped. Many players would be sad about this as they were so in tune with the earlier style. This year’s FIFA makes it easy for anyone to score a banger free kick as you can discern what type of shot you are gonna take before you even kick the ball. There is a small learning curve for sure, but the way it has been executed, now every player will be able to score screamers and worldies. Corners have undergone the same change, and they have also added a new camera angle that provides a new perspective to the players, and I’ve got to tell you, it looks beautiful. Penalties have also changed, now the scoring is a lot more about timing, than power and precision, saving penalties also seems a bit easier. Check out some of the set pieces I managed to score in FIFA 23 below:

The career mode is definitely the most cherished game mode in FIFA, so definitely the developers tried to change it a bit for the players to enjoy this mode even more. Most of the manager career mode is the same, but it does have that fresh-looking revamped menu, which in my humble opinion, was a necessary change. Now players get to see all the important information right in front and the rest of the useless stuff takes a back seat. Transfers and Negotiations are more or less the same, the new change is in the cutscenes, where you get to see your newly signed player enter the club. Star players like Messi and Ronaldo also come to the new signing. There is also a new animation for released players, which will make most players feel sad for letting them go. Other than that, the game mode is the same. Also, players will be able to check out one of the first crossovers between FIFA 23 and Apple TV’s Ted Lasso. Ted Lasso can be used as a manager in the game, and players can also build their careers around AFC Richmond, Ted Lasso’s team from the series. Check out the new cutscene animations and menu screenshots below:

Player career mode is something that has been improved upon and we love it. Now the game mode feels more like a campaign, rather than a monotonous schedule of scoring goals and changing teams. The new activities section is what affects the personality of the player. Players can now make decisions, purchases and investments, which will affect their personality on and off the pitch. So does their play style, if you’re more of a selfish player, then you’ll get attributes accordingly. In terms of investments, you could either take the frivolous route, the charitable route or the money-hungry route, the choice is yours. The player career mode is a breath of fresh air that every player desired, there is also a feature where players do not have to play entire matches, they can just play the highlights of the team, or if not that, they can just play the highlights of their specific player. This in my mind is a game changer as everyone does not have that much time to play full-fledged matches, now they can just play the important moments in the game and create their mark over there.

Where You Will Probably Spend the Most Time, FIFA Ultimate Team

As we all know, this is the most played game mode in FIFA history and many players have been drawn to the game thanks to watching their favourite YouTubers opening packs day in and day out. Ultimate Team has seen some of the biggest changes in the history of the game, most importantly, there are no more chemistry lines, instead, there is a new way to match the chemistry, which in my mind was a required addition. Through the new chemistry style, players will have a lot more freedom in building their team and won’t be restricted to countries and leagues. Players can now have chemistry between both full-backs or even between the striker and centre-back, the game provides you with a lot of freedom and gives you an opportunity to apply your creativity and create the most goal-hungry team possible.

Another change that is well appreciated is that you can’t change position from Striker to Center Mid anymore, now every player has an alternate position or sometimes multiple alternate positions which players can switch to by using a position modifier. This change has brought a lot more authenticity to the game mode and it feels more true to life. We then come to the latest addition to FUT in FIFA 23 and that is the Moments game mode and it is just how EA advertised it to be. This game mode is essential for players that want some quick action, but do not have time to play an entire game. They can use this game mode to get into a ‘moment’ where they need to prove their mettle by completing certain tasks. Completing these tasks also has its rewards, which players can use towards opening packs or even cosmetics.

Fans of FIFA and and football should definitely purchase this title and also it is the last FIFA title they will probably play under EA, so they should pick up this end of an era copy. Well that is not the only reason that players should purchase the title, one of the long time complaints of the game being the same year after year has finally been resolved and it is jam packed with new content to try out. This time around the focus is on realism while adding more flair to the gameplay and it has been executed almost perfectly. While the game might feel the same old football simulations at times, the new additions enhance the experience and add a level of immersion to the game.

Must “G” TV: Google runs this 30-second ad on YouTube for the Pixel 7 and Pixel Watch

The iPhone 14 won’t have a physical SIM

Will the iPad become bigger?

Samsung Galaxy Tab A8 Wi-Fi and LTE Models Get…