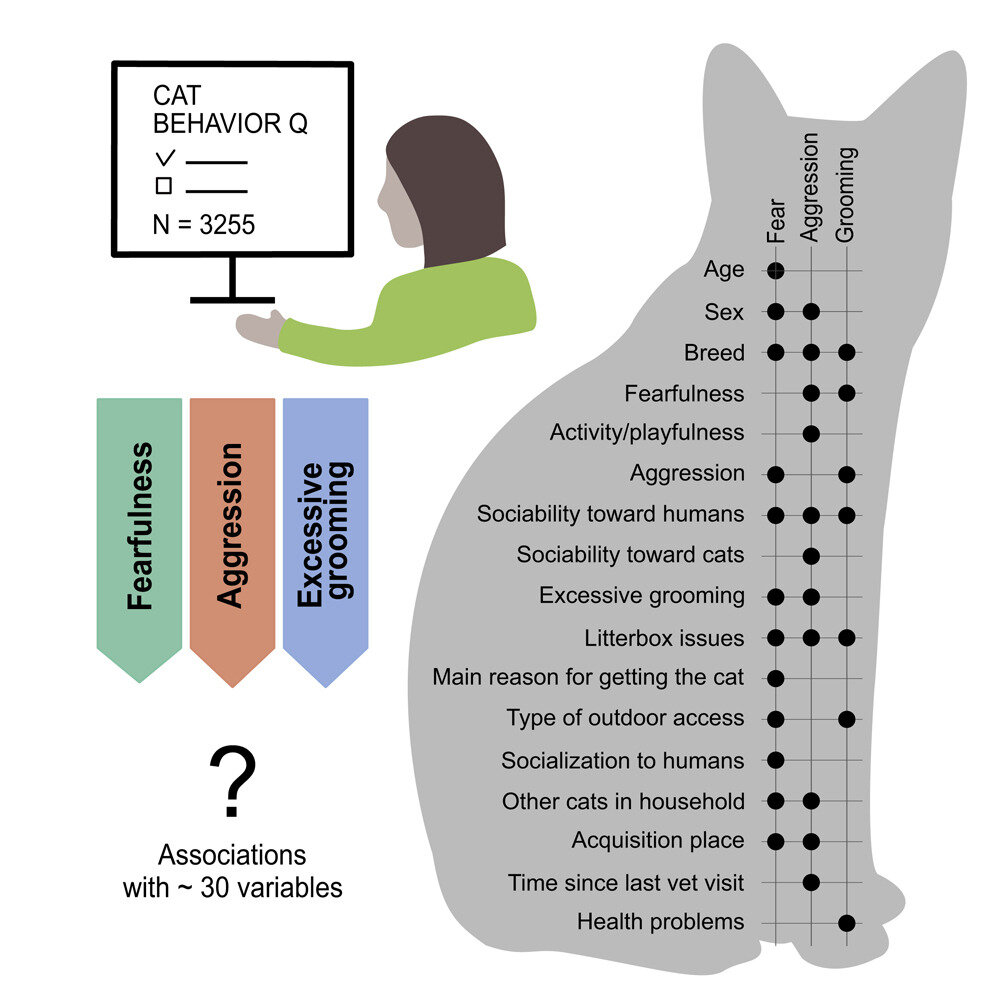 Cats are popular pets. At times, their aggression towards humans and other problematic behavior poses challenges to our co-existence with them and can even result in giving up the pet. The causes underlying problematic behavior can be varied, and they are poorly known. Even internationally, very little research has been conducted on the topic.

“We wanted to find out what factors are associated with the problematic behavior of cats, such as fearfulness, aggression towards humans and excessive grooming. We utilized a survey dataset previously collected in our research, which we have already used to investigate the construction of the feline personality,” says Doctoral Researcher Salla Mikkola from the University of Helsinki and the Folkhälsan Research Center

The fearfulness factor included statements on the cat’s reaction to strangers, sudden noises and changes taking place at home. Aggression towards humans included scratching or attempts to bite in conjunction with care, such as when being brushed. Excessive grooming included extensive and intensive grooming as well as self-mutilation by pulling hairs off with teeth, or by biting or licking.

“We investigated the link between these problematic behavioral and personality traits, and almost 30 behavioral, environmental and biological factors. For example, the socialization of cats with humans was associated with fearfulness. Cats who had come into contact with unfamiliar adults and children under 12 weeks of age only a few times or not at all were more fearful than cats who met strangers on a weekly or daily basis. Fearful cats also received, on average, higher scores for litterbox issues, aggression and excessive grooming,” Mikkola says.

Prior studies have also shown that fearfulness can lead to aggressive behavior, such as hissing and biting, if the cat sees no other way out of a frightening situation. No direct causalities can be established on the basis of the data.

“There were less aggression and fearfulness in households with more than one cat, but we cannot say for certain why this is. It may be that the companionship of other cats is an important stimulus for cats, or alternatively, people don’t want to take a mate for their aggressive cat due to its nature. Research carried out through a different design is needed to explain causalities,” says Professor Hannes Lohi.

The research was published in iScience.

Provided by
University of Helsinki

ISRO Operational Activities Set to Be Moved to NSIL, to Focus on Research and Development, Chairman Says