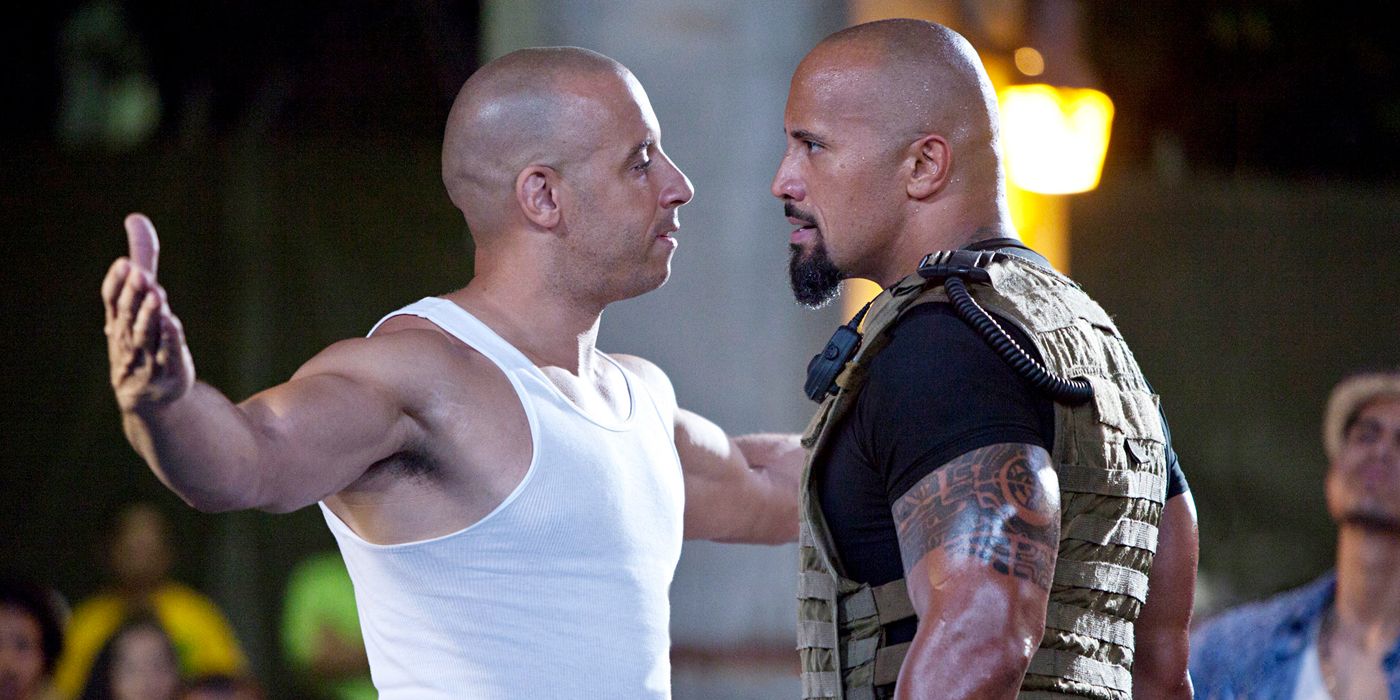 If anything, F9 proves that the Fast and Furious franchise needs both The Rock and Vin Diesel to be its best. F9 adds a twist to the Fast and Furious universe. Though Dominic Toretto (Vin Diesel) is all about family, he once turned his back on his brother, Jakob Toretto (John Cena). Dom thought Jakob had something to do with their father’s death on the race track, so he subsequently beat his younger brother in a race and told him never to return. Now, Jakob is back, and he’s an international spy looking to control all of the world’s weapons. Taking Jakob down isn’t easy in F9. To defeat him, Dom needs to gather his old crew, face his past, and toss cars around with the help of giant magnets.

In 2019, Dwayne Johnson, a.k.a. The Rock, broke off from The Fast Saga in the Hobbs & Shaw spinoff. In the film, Hobbs and Shaw (Jason Statham) continue their frenemy banter from The Fate of the Furious, teaming up to take down Brixton Lore (Idris Elba), a cybernetically-enhanced terrorist, and save the world from a deadly disease. The pair have to put aside their differences to face Brixton, also enlisting the help of Hobbs’ family and some Samoan warriors along the way.

F9 shows The Fast Saga needs to reunite Diesel and The Rock. The pair had a public falling out during the production of 2017’s Fate of the Furious. In addition to acting duties on The Fast Saga, Diesel is a producer, and Johnson seemingly had a problem with the decisions made on set. Both actors have discussed the feud numerous times, and the pair supposedly set aside their problems. However, there are hints in F9 that Johnson and Diesel’s feud is still going. And The Rock recently said that he wouldn’t appear in the main Fast and Furious films in the future. However, the movies need both actors to succeed.

If The Rock and Diesel combine their star power, it’d immediately boost how the films perform. Hobbs & Shaw made more than 750 million worldwide at the box office, but it was still somewhat disappointing, having the worst Fast and Furious box office opening since 2009 at the time. In the face of the COVID-19 pandemic, F9 has succeeded at the box office, securing over $600 million worldwide since its release this year; however, those numbers are dismal compared to what the movies usually take in. For instance, Fate of the Furious, which included Diesel and The Rock, once had the best box office opening ever, beating Star Wars: The Force Awakens at the time and taking in more than 530 million worldwide. Including The Rock in F9, especially after the feud, would’ve made it an even bigger draw.

Beyond the numbers, the pair make the movies better. It’s weird for a franchise that’s all about family to definitively break up that family. Hobbs & Shaw felt like a side mission for the Fast franchise, excluding characters at the heart of the movies. Likewise, F9 resorted to making up a new family member in John Cena’s Jakob, which doesn’t fill the void left behind by The Rock. But when the whole family is together, it’s magic. For instance, the first pairing of Diesel and The Rock, Fast Five, is widely considered the best film in the Fast and Furious franchise. If they stay apart, Diesel and The Rock will do just fine, but they should both perhaps remember the immortal words of Dom Toretto: “You don’t turn your back on family.”

Bill is an experienced reporter who’s covered entertainment and fandom since 2014. He’s done everything from unearthing the discarded Game of Thrones pilot script in a library in Texas to finding out why Steve left Blue’s Clues. He also enjoys eating Taco Bell and drinking chocolate milk.